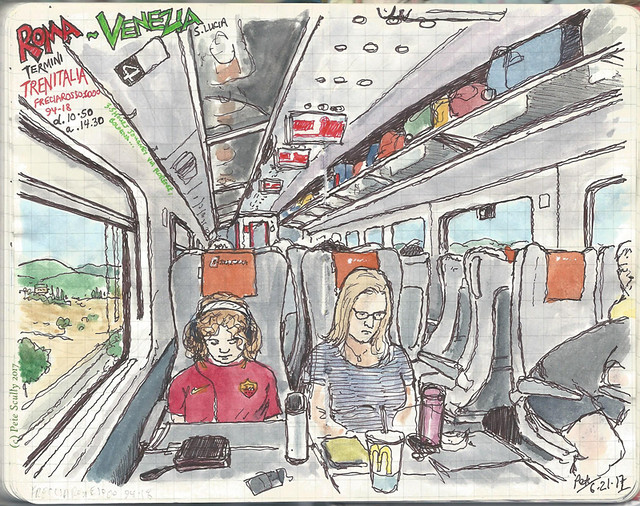 And so we left Rome on a fast train from Termini station, speeding through the Italian countryside (and what countryside!) on one of the nicest trains we’ve been on. I once spent a summer travelling Europe on the trains and this was nicer than all of those as well (that was in 1998 mind you, and most of them were overnight trains in central Europe). It took us over 3 hours to reach Venice from Rome, stopping in Florence on the way (but not getting out and looking around, we’ll save that for next time). My son was proudly sporting his brand new AS Roma shirt that he bought with money his Nanny in England had given him (it’s by far his favourite souvenir from Italy!) (when I say Nanny I mean my Mum, not a Nanny like in someone who looks after kids for a living) (international translations here). I wore my Sampdoria shirt so we were the Serie A Boys. The Calcio Kids. On our way out of Italy, flying back to London, we were both wearing our Tottenham Hotspur shirts and the border guards immediately called out to us with big smiles, “Eh, Harry Ka-ne! Totten-ham!” We had to wait while they looked up something, it turns out they were just trying to look up the name of Tottenham’s stadium, but were confused to see that it was now Wembley. They were very excited about Spurs.

Speaking of airports, while I am showing you my in-train sketch of Trenitalia Frecciarosso 1000, here are the other transport sketches from our summer trip. First off, Oakland to Gatwick, which started with a 3.5 hour delay, which was fun. On mt left was a woman who when I first got on board hurriedly picked up a bunch of items from my seat before I sat down, I assumed they were her things. Then when she just sat there holding them I asked, are those mine? (Blankets, headphones) “Yes, I picked them up for you,” she said, “and you are lucky, I don’t usually do nice.” Which was an odd thing to say to a complete stranger. She was British. “Ok, thanks,” I said, taking back the blankets in a bit of a puzzle. I’m not really one for conversations with fellow passengers. I noticed as we sat on the runway she was reading through not only the Daily Mail but also the National Enquirer, which I’d never seen people actually read before, so you see something new every day I suppose. We were in Economy Plus – these BA flights from Oakland to the UK are so much cheaper than we usually pay that we upgraded for a bit more legroom – but still it was a long and hard-to-sleep-on flight. I did at least get my sketch in. I had time… 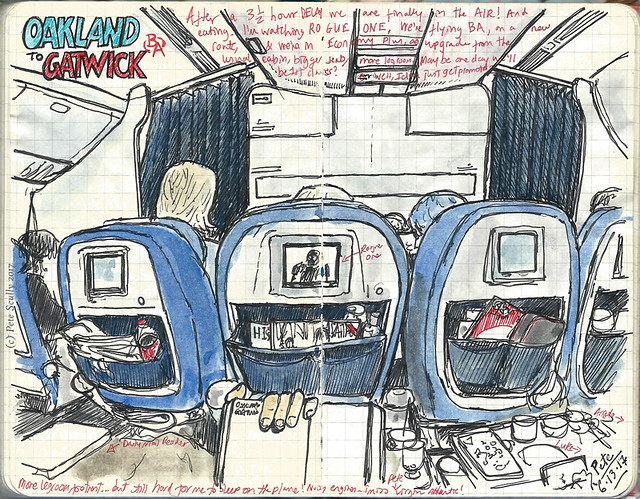 We flew Ryanair to Italy, from Stansted to Rome. As you may remember I call Ryanair “Difficultjet”, and this time the difficult bit was that they don’t let passengers from the US (or non-EU at least; good luck Brits, in a few years) use paperless boarding passes, unlike for example Easyjet, who do. Which means if you are travelling and need to print your boarding pass a day ahead (because you have to check in online nowadays, no other choice) and don’t have access to a printer, as we didn’t, you have to pay loads of money to Ryanair for them to print it out for you, at least fifteen quid a ticket. So that’s annoying. In the end we did find someone with a printer, but most travellers wouldn’t necessarily have that option. Otherwise though I don’t mind Ryanair, they fly to a lot of places and are cheap. It was exciting flying over Belgium, Germany, Austria; my son asked if he could check these off and say he’d been there now, but no, flying over is not the same as being somewhere. If it were, then we’ve been to Greenland loads of times. 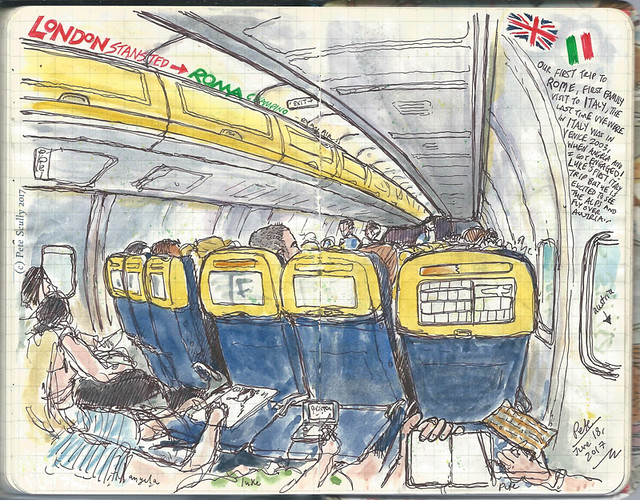 Venice to Luton was on Easyjet, which was pretty easy. My son’s hair in this sketch looks red like mine, bu it really isn’t, it’s more light brown/blond. However my paints were very much stuck in the Easyjet colour scheme. Boy we were tired after that trip. 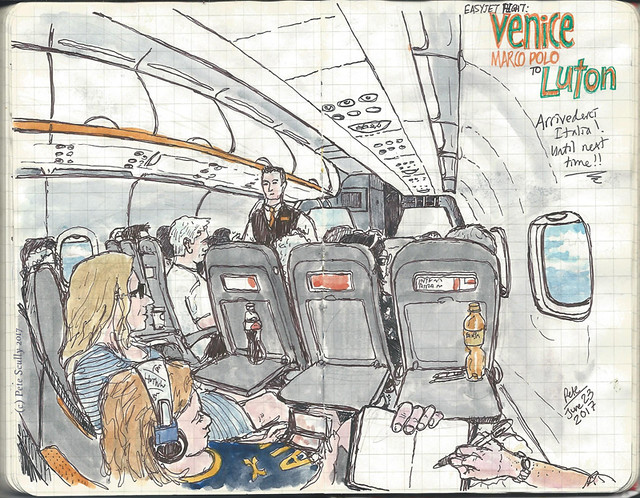 And the final flight of the vacation! This was a trip in which we went through SIX different airports (Oakland, Gatwick, Stansted, Roma Ciampino, Venice Marco Polo, Luton) which of course is my favourite thing, I love airports, SOOOOO much. This was a decent flight home. I had no stranger with a Daily Mail next to me (although my son put the brown BA blanket over his head, making him look like a Jedi). This little Miquelrius sketchbook/random notebook, which I’ve had for five years now, has a lot of in-flight travel sketches in now. Lots of Bon-Voyages. 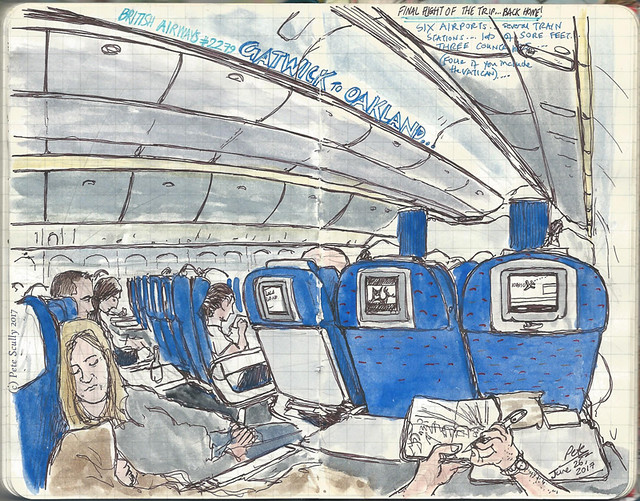 4 thoughts on “on the tracks and in the sky”