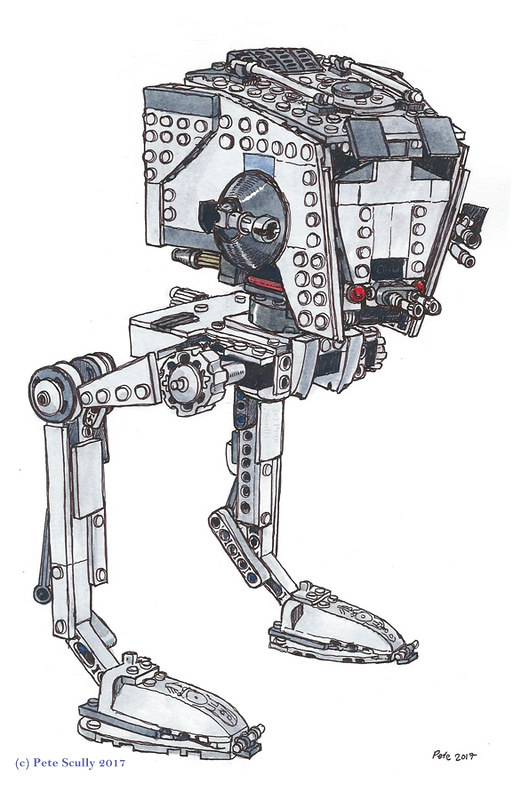 More Star Wars Lego (and this ain’t the last of it). This is the AT-ST, otherwise known as the Scout Walker. Not Scott Walker as my autocorrect would say. “the Twin Suns Ain’t Gonna Shine Any More”. This is the one from Rogue One, seen briefly unless you were looking at your popcorn or literally blinking. It’s the same as the ones seen in Return of the Jedi, the ones famously useless at dealing with rolling logs. This vehicle will always remind me of getting run over at age 7 by a van outside my house.

I was playing with my friends Natasha and Simon in our narrow street, my Star Wars figures all over the doorstep. We crossed over the street to see if our friends Robert and Victoria wanted to come out and play. They couldn’t; they had family visiting. Ok we said and turned to dash back over to our side of the street. My street was narrow, but cars parked on one side meant it was hard to see oncoming traffic. I was first, so I stepped into the street and woke up on the couch, covered in blood with crying and panic all around. I vaguely remember the impact knocking me out, seeing a big white blur. I think the van was white. It was probably going too fast, but it hit me head first so I have no idea. I was lucky. I spent the night in hospital, and all I had was a big beaten-up face and a black eye. But I got a new Star Wars toy as a present, which was the old Kenner AT-ST Scout Walker – Return of the Jedi had come out a few months before and was pretty much my favourite thing in the world. I remember my older sister playing with it with me, creating a terrain on the carpet by putting a blanket over several other items to create hills. There was a button on the back to make it walk. I did have an Ewok with a little glider that dropped boulders on it, as well as the Biker Scout on the Speeder Bike (which would ‘explode’ by pressing a little button on the back). My tortoises had a little brick ‘hut’ in the back garden I would pretend was the Imperial Bunker (the tortoises didn’t mind at all, I think they enjoyed being part of the story). All of this, I think of when I see the AT-ST! Hardly a trauma. I remember people asking for a couple of months afterwards, “who hit you?” It was a van, don’t worry about it. My school photos from 1983 showed a lot of scabbing and a redness in my eye. I did miss a couple of days of school. Ironically, one of my best friends in class, Wayne, also got run over on the exact same day in a separate incident. (Conspiracy theorists of 1983, get on that!). I think he was hit by a taxi. He was out of school for longer than me though, because he had broken his leg. I remember Wayne, we used to play chess and talk about animals and politics; he loved running and was good at football, he supported Everton, we both liked Sampdoria. His family were Jamaican and when he went over to Jamaica when we were 9 or 10 he brought me back this thing called a ‘Jamaican Yo-Yo’ and incredibly I STILL have it. I should find it and sketch it sometime.

This was a fun set to build, and comes with (among others) Baze Malbus, the dude with the massive blaster in Rogue One who is friends with Chirrut Imwe. Those two were cool.