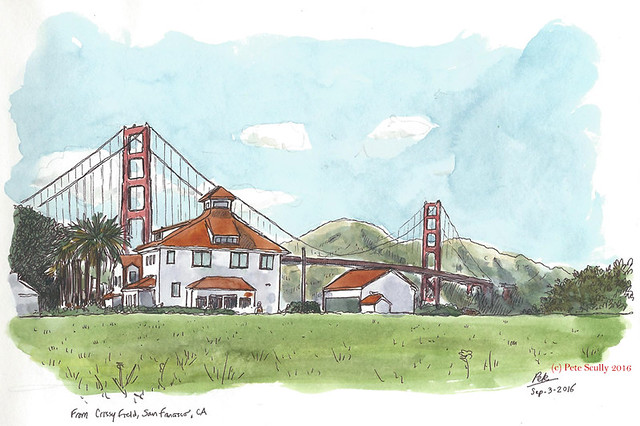 Recently, for our anniversary, my wife and I took a couple of days down in the City. That is San Francisco to you. We stayed at the Fairmont Hotel, which is an old San Francisco spot of legend up on Nob Hill – it was here that Tony Bennett first complained to lost and found about losing a vital organ, through the medium of Croon. I’ve always wondered, is that song supposed to be a metaphor, or did he actually leave his actual heart lying around? And his other city based songs, is Chicago really just a tantrum-throwing two-year-old? I don’t know, Tony. I love San Francisco though, it’s honestly one of my favourite places in the world to be. I did leave a shirt there once, hanging in the closet in the Hyatt. Above, Crissy Field, out near the Presidio. We went to the Walt Disney Family Museum, very interesting. 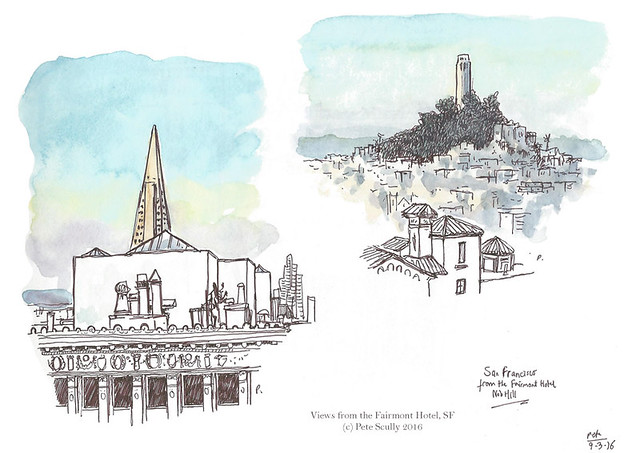 Our room had absolutely stunning views over the City. As the sun went down, before getting ready for dinner, I sketched a couple of the views – the peak of the TransAm Pyramid, golden in the sunset light, and Coit Tower, up on top of Telegraph Hill. I wish I were rich, I would just live in San Francisco for ever and ever and ever. It’s a city that is pricing people out though, so I don’t think drawing a few pictures and writing a few books is going to get me to San Francisco. When Tony Bennett sang that song, he was actually talking about having to farm out his own organs just to cover the rent. Ah, perhaps it’s for the best. One of the things I love about San Francisco is getting to visit it – it is so utterly different from Davis in every way, it’s always a nice change of scenery. 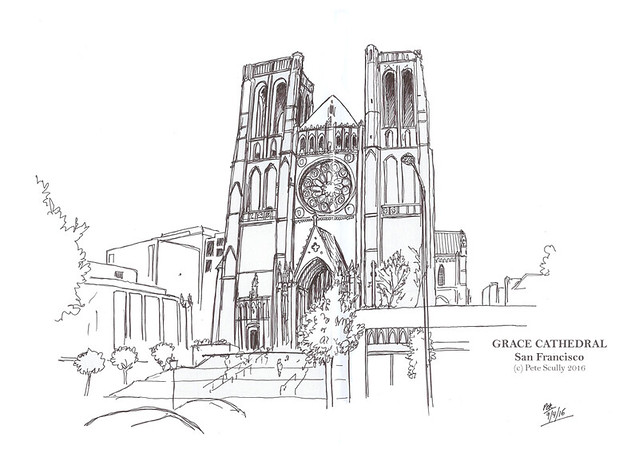 I have sketched this big old church before, Grace Cathedral on Nob Hill. I did their Christmas Concert program a few years ago. Since we were staying so close I wanted to get a Sunday morning sketch of it in. I didn’t have a lot of time, so I drew in my new purple Leuchtturm sketchbook that I got in Manchester. 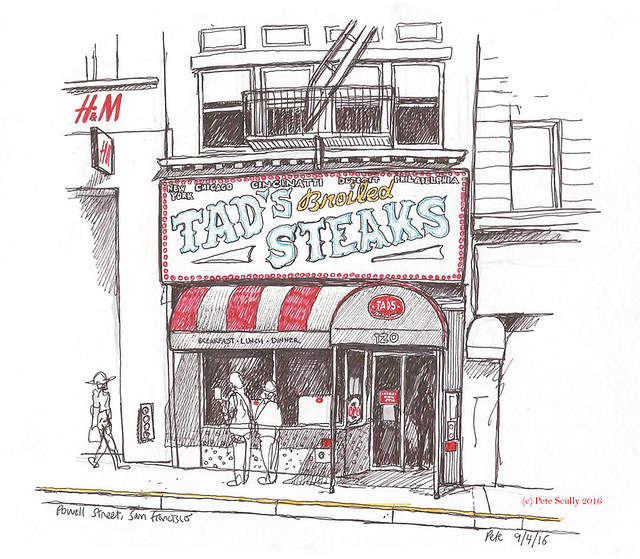 After that, we went to ZineFest, and that was kinda fun. Actually probably enjoyed it more in previous years, I found fewer gems this time around, though I still spent on a few zines. I tended to buy some of the really random ones. We got the Muni back down to Union Square for a little bit of shopping; I bought some underpants at Uni-Qlo, I really like their underpants. I realize you don’t need to know that, but I’m just saying for those of you who also wear underpants (a good deal of you, I suspect), that Uni-Qlo do make really comfy ones. While my wife continued shopping, I sketched Tad’s Broiled Steaks outside, an old eatery on Powell Street. Always wanted to sketch this place, though I don’t of course eat steak. And there you are, San Francisco again. I want to go back!