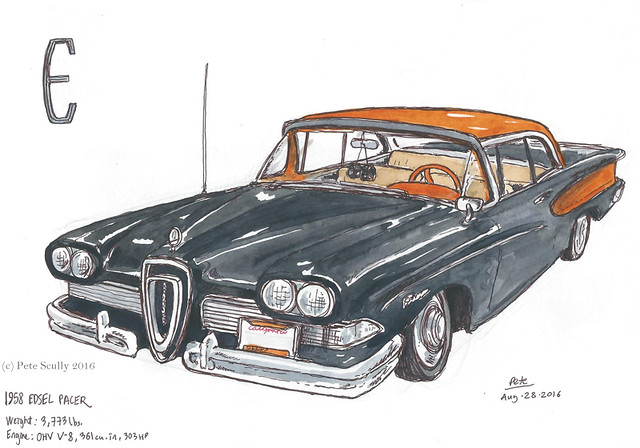 Time to draw some classic cars. I went to the California Automobile Museum in Sacramento last week (can I just point out, I cycled, then took the bus, then walked for a long time to get there, ironically). It’s only the second time I have been, but they have a lot of very interesting historic vehicles there, I’d recommend a visit. After sketching cars with Lapin and Gerard at the Manchester Symposium I was eager to draw some really old classics. I didn’t sit super close to them for that distorted perspective, but close enough, and closer than usual in one case anyway. So, above is a 1958 Ford Edsel Pacer, shining black with cool orange trim. If it kind of looks like the old Batmobile from the 60s, it’s because that car, designed from a Ford Lincoln Futura, was designed by the same person who made the Edsel, Roy Brown. No, not Roy Chubby Brown, a different Roy Brown. The fire exhaust and red batphone were probably not standard issue. Apparently this car did have its problems though, I was told, what with most of the controls being just a bunch of buttons – it was easy to press the wrong one. You might think you are indicating to turn left, when in fact you are releasing anti-Joker spray. 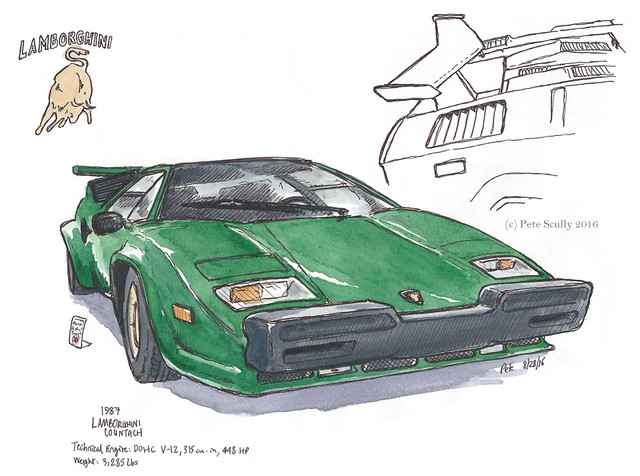 When I was a kid (playing Top Trumps, also watching Transformers), you knew that the coolest car in the world was not a Ferrari, not even the Porsche Carrera (which was pretty bloody cool), not even Face’s Corvette from the A-Team, but it was the Lamborghini Countach. I had a toy one, the doors went upwards. That was even cooler than the DeLorean (without time-travel or flight, neither of which most DeLoreans could do anyway). This is a 1987 Countach, and I sat as close as I could get (there was a sign saying “no touching”), and there were only 2,042 of these ever made, between 1973 and 1990. Yeah if I was ever super rich, I’d want one of these. Plus some guards. 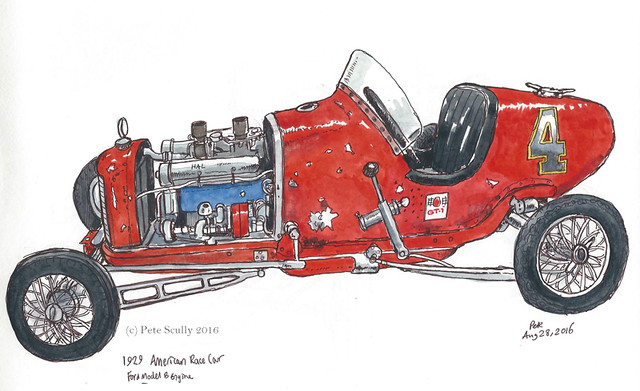 This was a race car from 1929, American. I loved those old race cars, makes me think of Chitty Chitty Bang Bang, reminds me I haven’t seen that film in ages, which reminds me of Dick Van Dyke’s odd American accent (both his father and kids are British in the film) but as a Transatlantico myself now, I don’t care. I just love that opening sequence with the old grand prix races. I actually started a new Seawhite sketchbook to draw this, having run out of room in the Stillman & Birn one (except for a double-page spread I was saving for a panorama). 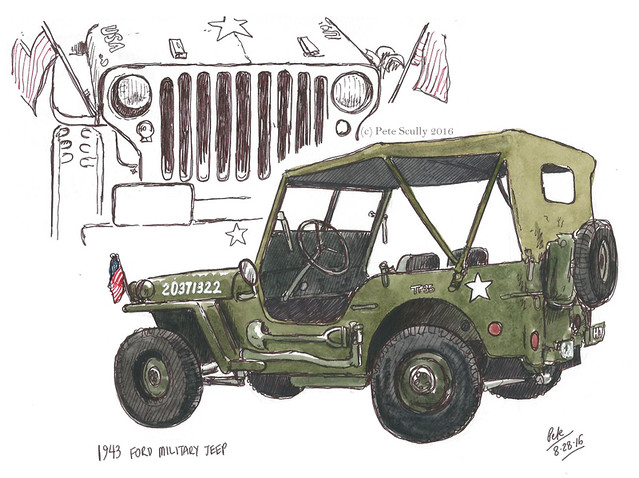 I had to sketch this old American Military Jeep. The Jeeps, made by Ford, are those classic army vehicles, Jeep probably standing for ‘G.P.’, general purpose. One thing I was told, and I notice this now looking at all the modern Jeeps out there (of which there are loads), is that military Jeeps have nine openings in their front grilles, while civilian Jeeps only have seven. It’s their thing. I never knew that. I do hope it’s true. 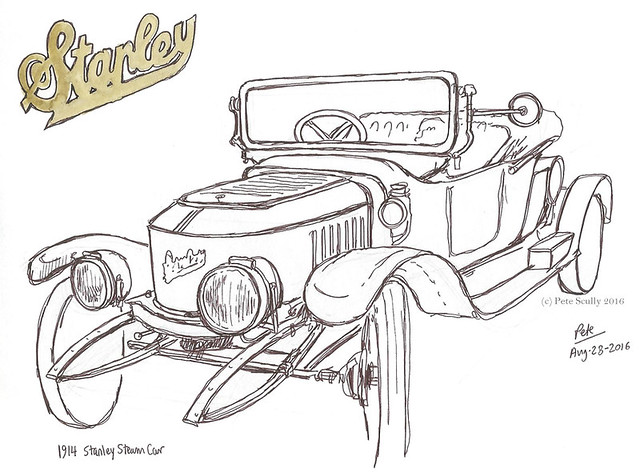 Finally, exhaustion set in and I could not finish this one, the 1914 Stanley Steam Car. I drew it because of Stanley, the founder of Radiator Springs in the Cars movie. Apparently its nickname was “the flying teapot”. Also, I was told that the Stanley Steamer is completely unrelated to the Stanley Steemer Carpet Cleaner, who, I was told at the museum, totally stole the name, allegedly. Anyway, these were all the cars I could sketch, and so I trundled off on the hot Sunday afternoon back to Old Sac for a cold drink.