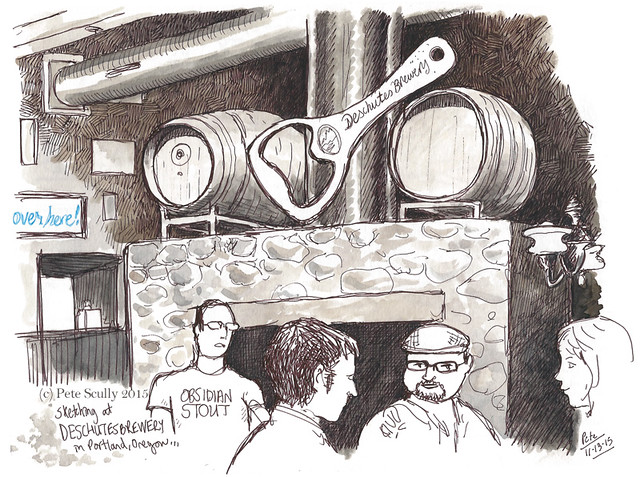 In our first evening in Portland, we went to a couple of different brew-pubs, the first being Burnside Brewing, where we met with a couple of old friends we haven’t seen in years, Robin and Chris. I didn’t sketch there, but I did have a nice red ale called “Too Sticky To Roll”. After leaving them, we across the river to the Deschutes Brewery, as I really like their beers. I had been there once for a pint in 2010, and while it can be busy it’s a nice place. I got an Octoberfest beer (I can’t remember the actual name), and sketched the above scene with the barrels and the giant bottle opener. I added the wash later. At Deschutes we met with Rita Sabler, fellow urban sketcher and one of the most prominent contributors to the Creative Sketching Workshop book (her drawing and storytelling style is awesome), who I first met at the Portland Symposium in 2010, and again in Barcelona in 2013. We were joined by her partner Jim, and we had a nice dinner, sketching and talking. I had the Black Butte Porter Mac and Cheese with Chicken, it was delicious. Afterwards, my wife and I spent a bit of time mooching around Powells before heading back to the hotel (waiting a long old time for the MAX as well). 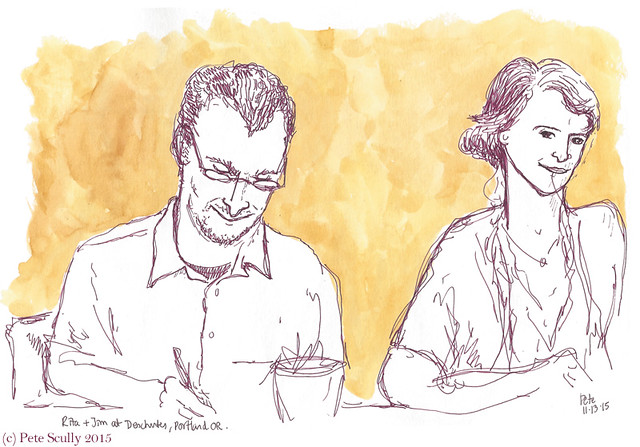