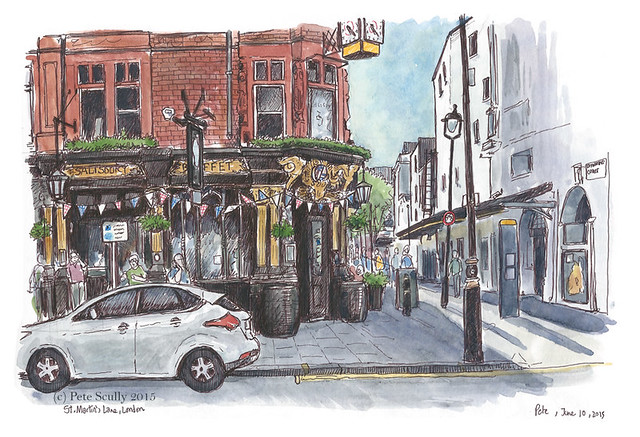 Another London scene, another London pub. I sketched this on the same day as the last post but am posting it separately because that was about Soho, and this being a few blocks away on the other side of Charing Cross Road is really not. Plus I got to draw a different map (in a sketchier style, though in retrospect the colour scheme, the splatters and the near-total illegibility makes it looks like it was raining, when as you can see it really wasn’t) (I don’t care, I like it). So here we are in St.Martin’s Lane, which winds down from Long Acre to William IV Street, looking towards the church of St. Martin in the Fields. Roughly in between Charing Cross Road and 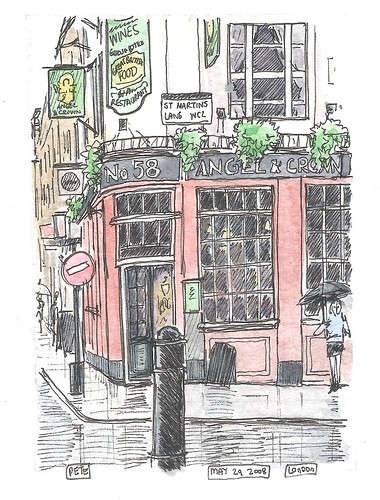 Covent Garden. This above is The Salisbury, located on the corner of St. Martin’s Court. Now several years ago (2008 as it happens) I did sketch on this corner before. On that day it was raining, and hard. Nothing pleased me more; we had been in the middle of a very dry period in Davis, so any London rain put a huge smile on my face (going through the current historic Californian drought, I now look upon that period in Davis as the wet one). I stood beneath the shelter of the theatre opposite and sketched this pub on the corner, the Angel and Crown (see right), I’m glad I did; it was closed this time. It wasn’t clear if it was closed for good, but it was all boarded up, and when I walked past a week later it had even more boards up around it, and seemed as if it might be given a different name. So i am glad I sketched it then. This time I stood outside the Angle and Crown (right where that lady with the umbrella is standing in the older sketch) and drew the more ornate black and gold exterior of the Salisbury. This pub dates from 1898 (actually it’s much older, and was previously called the Coach and Horses, in a nice callback to my last post). The name refers to the Earls / Marquises of Salisbury, landowners in this manor, the first of whom was Robert Cecil (Cecil Court is around the corner) who was a political bigwig in Elizabethan times. Right, enough history. This pub is in the heart of Theatreland, and has long been associated with actors, though theatre-going tourists flock here too for its authentic interior. After doing the inkwork and some of the wash, I popped in for a pint and to add a little bit more paint. I chatted to an old Irish builder nursing his Guinness while I painted, while groups of tourists perused their maps. I wrote a note in my sketchbook, “£4.60 for a pint!” and exasperated at the price of beer in modern London. This, I told myself wisely, is why so many London pubs are closing, nobody can afford to drink out any more. After visiting a couple more pubs in London, where a pint of beer tended to be above a fiver, £4.60 seemed like a golden age (comparison, when I left London £3 a pint was considered expensive). Alas, with London rents and property values skyrocketing, a lot of pubs can’t afford to exist (especially when developers see more value in luxury flats than places of historic community value), so it’s nice to see the old ones that still do and if the price of beer has to go up to enjoy them, well so be it, I suppose. This was never one of my usual stops in London, but I appreciate the hell out of it now. 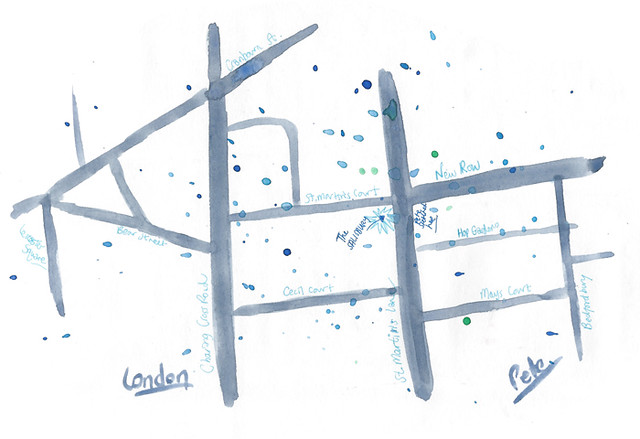 8 thoughts on “the pubs of st. martin’s”