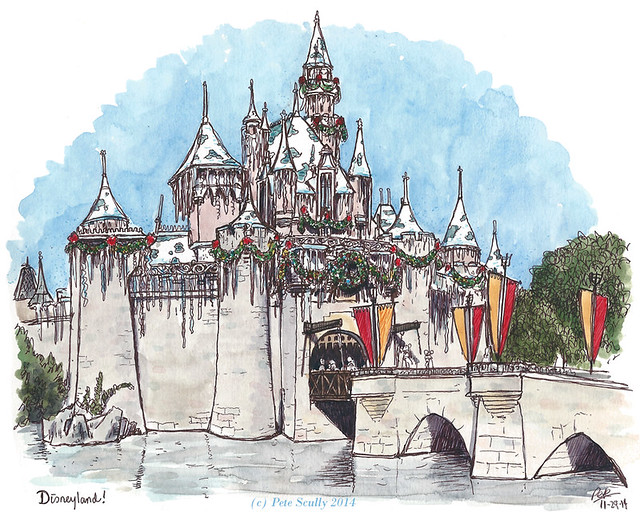 The weekend of Thanksgiving was not spent gorging on leftover Turkey. Black Friday was not spent queuing up outside Best Buy at 4am to get $5 off an iphone or some other nonsense. No, the Scully Family went to the Happiest Place on Earth: Disneyland, California. We love Disneyland. Evidently a lot of other people do too because it was pretty busy, but fortunately my wife is an expert at strategizing Disneyland so we made full use of fast-passes, early entry, single-riders, and generally had a great time. Of course with the usual constant movement about, I only made time for a couple of sketches, and you can’t really sketch in line (no, you can’t, you really can’t. Those lines are long but they move). Above, Sleeping Beauty’s castle, all redecorated for Christmas. The Holiday Season at Disneyland is pretty mind-blowingly spectacular, the amount of decoration is incredible. In Cars Land for example the number of different types of cars-themed Christmas trees were staggering. I definitely recommend a visit. The Castle however is the centrepiece and was really pretty, especially at night. When the fireworks lit up the sky above, snow machines blew snowflakes over everyone. I drew it in the daytime as you can see. It was a warm day, t-shirt weather. My wife and son had gone back to the hotel for a nap (though actually they went and sat by the pool – late November folks, late November!) giving me some solo exploring time. I met them later to watch the parade, and we sat by the Disneyland Main St Station, where I did a quick sketch of Disneyland City Hall while waiting for the parade. No sketch of the parade though, you can’t really sketch parades, no you can’t, not really. Well, I can’t. Well I could, but I don’t want to. 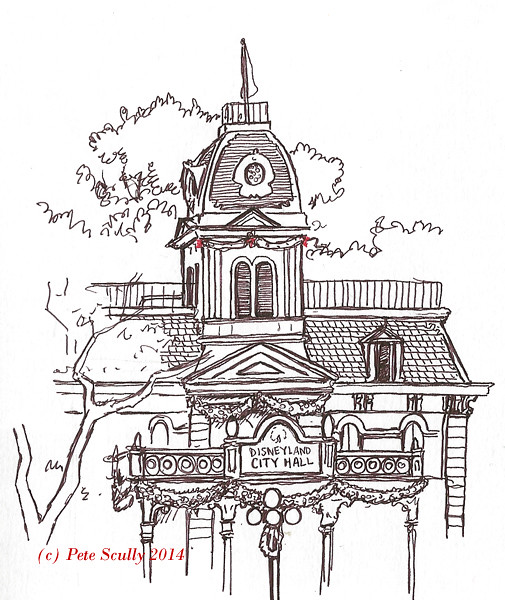 I do love Disneyland, and would love to draw the whole thing. But you know how it is, you pay a lot of money to get in, you don’t want to sit in one place for two hours drawing a panorama when there’s so much to do! Like meeting Captain America. We did that. that was cool.