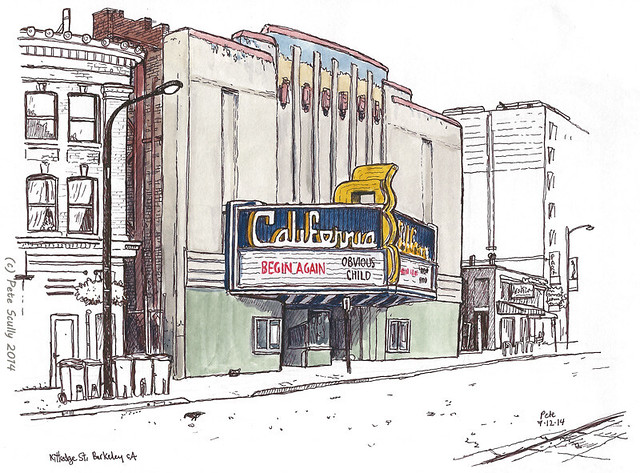 Last week was the event of the 44th Worldwide Sketchcrawl. Regular listeners will know I have been on many of the worldwide sketchcrawls over the years in many cities. Last Saturday morning I woke up, and decided: I’m going to Berkeley. The sketchcrawl was on the UC Berkeley campus, which for me was significant as one of the first sketchcrawls I ever took part in (it was in fact the second, the first being in Davis at the end of 2005, but I did not do much that day) was at UC Berkeley, in March 2007. On that day I sketched a lot but kept to myself, too shy to talk to other sketchers. I’m not so shy these days, but I did sketch solo, though it was great to meet and talk to other sketchers. I also remembered just how much I love being in Berkeley. The theatre above, the Calfiornia, I sketched in the morning before meeting the sketchcrawlers. I remember one of the last times I was in Berkeley saying, I must sketch that next time. That was five years ago, so I got there eventually. 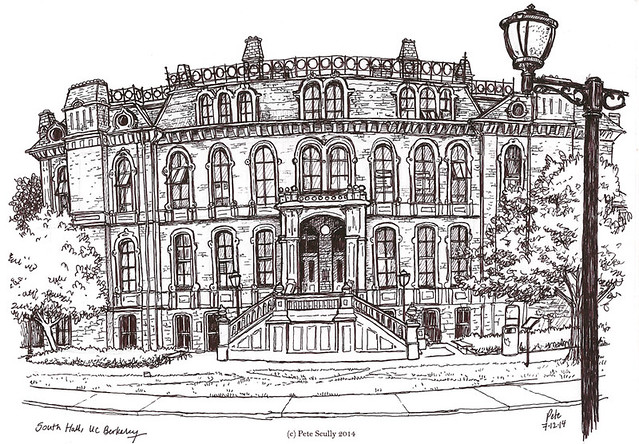 Above, my first sketch of the day. It took about an hour and a half, and I had intended to colour it but I haven’t yet. All of the colouring in I did was done later, because I didn’t bring a little jar of water for my paints (of my two small jars, one was lost and one broke, I haven’t found a good small one since). I don’t really do the waterbrush thing any more. So, it gives me more time for penwork, diving into the details. This is South Hall. Davis has one of those too, but it’s not as nice as this. This radiates grandeur. 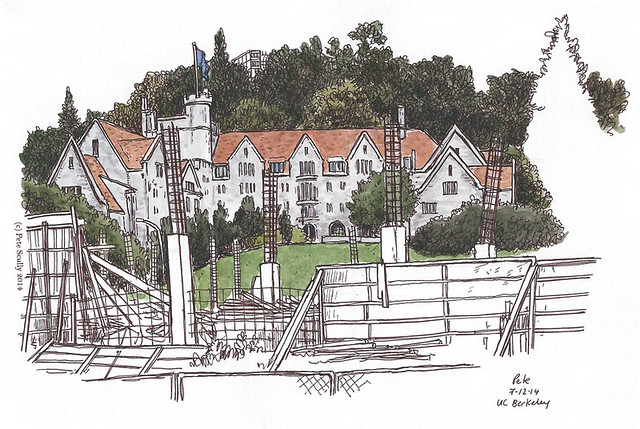 This is a building I have sketched before, Bowles Hall further up the hill. It looks like an old English country public school (Americans note, ‘public’ school in England is actually what we call private schools; our public schools are called ‘state’ schools. Mine was always in a state, anyway). I sketched it in 2007 on a much sunnier day (sunnier, but through the fog I actually still got burnt last week, stupid deceptive weak bay fog). This time there was construction going on in front of it, so I imagine this view will look different next time. 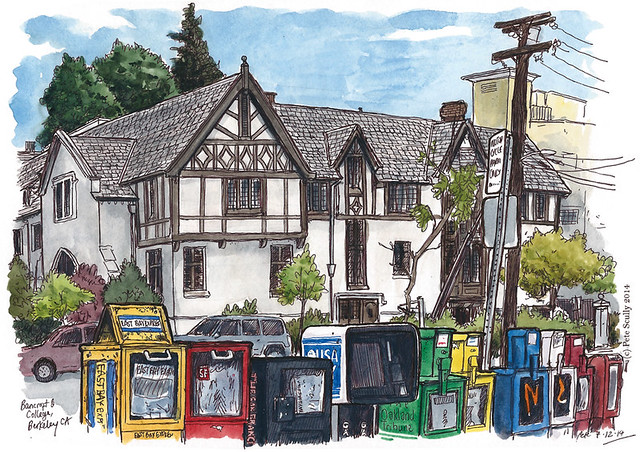 I went down the hill to the southern edge of campus, to the corner of Bancroft and College. This building is called the Free House I think. I was enticed by the colourful newspaper boxes which again, I had to colour in later, but spent a good deal of time (just over an hour) sketching all the little marks on each one. By the time I was done it was time to reconvene with the other sketchers, back at Sather Tower. There was quite a gathering. Here I am with a few fellow sketchers (left to right) Jana Bouc (one of the SF Bay Area Urban Sketchers and whose own sketchblog Jana’s Journal in fact inspired me to start this very blog you are reading); Pete (that’s me there with uncoloured version of sketch above); Gary Amaro (also an original Urban Sketchers correspondent, see his work online at garyamaro.blogspot.com); and Flory Nye-Clement, a sketcher from Benicia (who by the way is organizing a sketchcrawl at the Benicia Capitol State Historic Park on August 23, starts at 11am). Results of the sketchcrawl in Berkeley are being posted on the forum at sketchcrawl.com. 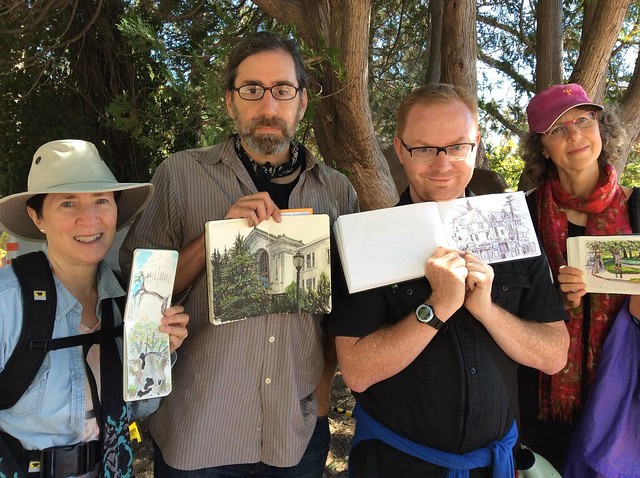 I’ve been quite a hermit lately in terms of sketching, and I must say it was very nice to get back out there and meet fellow sketchers again. It’s always good to rub shoulders with other people on this planet who ‘get it’. Hey, there are a lot of us urban sketchers out there!