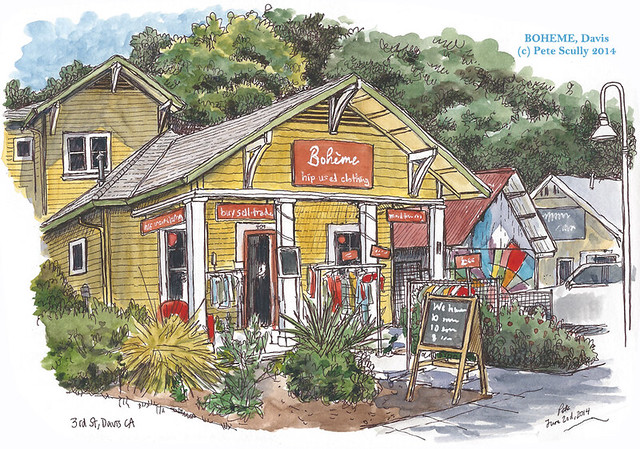 And back to the posting of sketches. I’ve been a little preoccupied with the Scene In Davis show, and also that other thing called the 2014 Brazil World Cup. Wow, what a World Cup it’s been so far! A million miles from the 0-0 borefest I had expected (though today there was finally a 0-0 draw). It’s been gripping stuff, and today especially I must so “Go USA!” Which is American for “Come On USA!”, it’s not a slogan for the tourist board. I do intend on posting a full description of the World Cup shirts, but perhaps tomorrow, after everybody has played once. Anyway, this sketch is of Bohème, on Third Street, Davis. I drew it all on site but added the colour when I got home. They sell hip used clothing, which is nice. Probably no old football shirts, though. If I were to wear a hip old international world cup shirt, I would probably go for an old USSR one (with the cyrillic CCCP emblazened across the chest), or maybe a green German away kit from the 1974, Italy’s kit from Italia 90 was cool too, or perhaps – and this is a controversial choice – the USA away kit from 1994, the light blue one with the stars, though I don’t think that really qualifies as ‘hip’. I’m not much of a hipster, unfortunately.