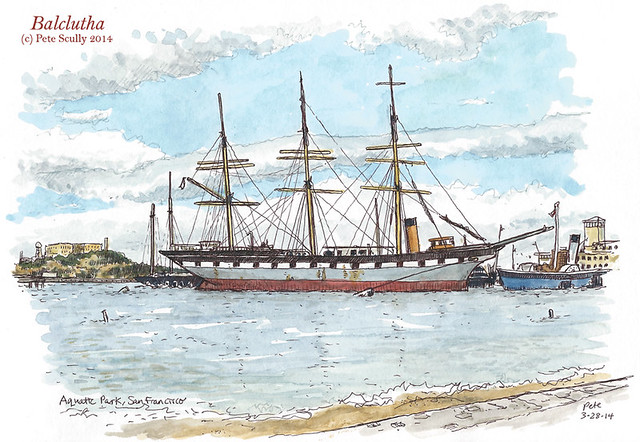 Recently I took a couple of days in San Francisco, the City by the Bay. I know lots of other cities are by bays as well (and this isn’t even the only city by this bay, nor the biggest), but when we talk about the City by the Bay we mean only one place. Anyway, to San Francisco I came, not to sit here resting my bones as such but to draw furiously, and draw furiously I did. After this one, anyhow, which was drawn calmly, peacefully and without any fury at all. It is lovely down there by the water’s edge, listening to the tide as it rolls away. I was blessed with a beautiful warm day (I always get weather-lucky in the city), the day before a huge storm washed away any doubters. I didn’t fancy sketching the mania of Fisherman’s Wharf much, and considered going out to sketch the Golden Gate Bridge (another time perhaps) but just wanted to sit and sketch the Balclutha, a magnificent old boat moored near Hyde Pier. There is Alcatraz, the former prison island, in the background (Clint Eastwood swimming just out of shot). I sat on a bench as joggers, tourists, cyclists, and those funny looking Segway riders bumbled by. At one point I took a photo of the scene using my iPad, at which point a Wandering Drunk stumbled by and said loudly, “I wish I could sink that thing!!” Now here is an example of the modern world taking over common vocabulary, because I actually thought he meant the iPad, as in ‘sync’, and I was most confused. “It’s not even American!” he continued, while swilling his can of cheap beer. Now I was confused; Apple is based not far from here, surely, what are you on about you nutter? It was not a conversation I was interested in having, but then when he started gesturing at the ship I realized, aaaah, you mean the boat, right I get it now, you make sense now, carry on. He perched himself at the top of the steps with a six-pack and carried on making idle threats at passing maritime vessels, which to be fair is probably a nice relaxing way to spend the day, for all I know. I did look up the sailing ship Balclutha when I got home, to see if it really wasn’t American, and apparently it is not, it was built in Glasgow in Scotland (‘Balclutha’ is Gaelic and refers to the city on the Clyde), was renamed Alaska Star and Pacific Queen for periods, and has been moored in San Francisco since the Maritime Museum purchased it in the 1950s. You can find out more about the Balclutha on the National Park Service website.

9 thoughts on “just to make this dock my home”