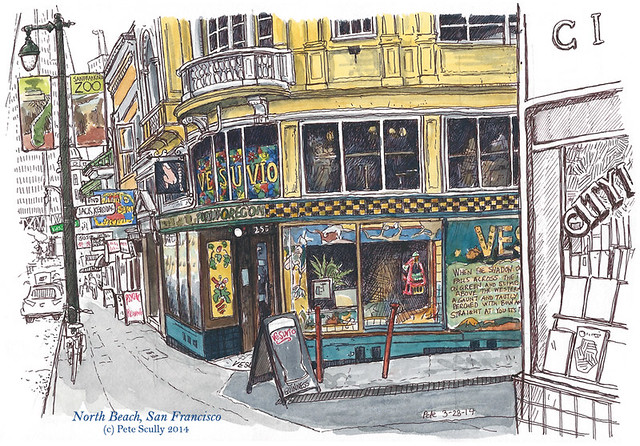 Back to San Francisco’s North Beach, on that Friday of sketching at the end of last month. After a quick check-in at my hotel, I walked back up Columbus to stand outside the famous City Lights bookstore and sketch Vesuvio’s, a popular local bar on the corner of Jack Kerouac Alley. This junction is one of my favourite in the world. I have said it before, I could draw this area for years on end and never get bored. Well, not that bored anyway. The last time I tried to sketch on this spot, about five years ago, I got a little way in before rain stopped play, but on this occasion it was a warm, sunny Friday afternoon, getting into Happy Hour, as the world ended its work week and started to relax. It was a fun time of day to be out with a sketchbook. As I stood, the occasional bar patron would come out and check out what I was sketching (one bloke had his friend wave at me from the upstairs window, so I added him in). I popped my head inside afterwards, but didn’t stay for a pint, as I had more sketching to get on with while the sun was still shining. I have been in before, and one day I plan to sketch the interior. 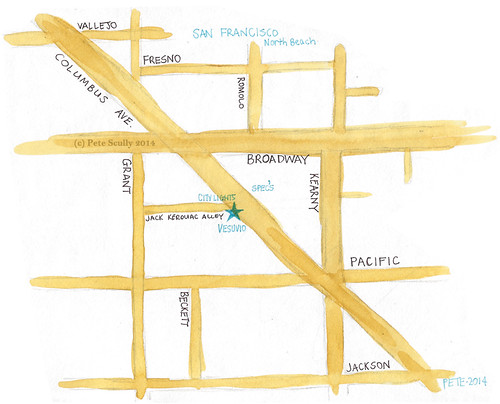 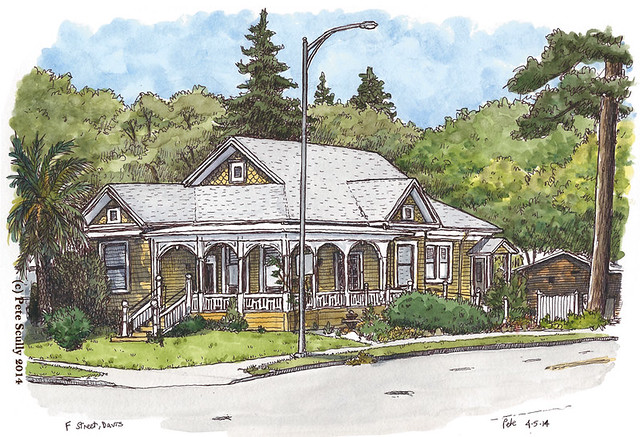 I cycle up F Street a lot, on the way home from downtown, and have passed this historic Old North Davis building for years. “Must sketch that someday,” I always said to myself. I believe it’s a dentist’s office, but it’s a lovely period house in a neighbourhood of nice old wooden houses from a century ago, two blocks from the Co-Op. If I could draw the entire area all in one book, I would (hint hint, there’s a commission idea, City of Davis). Actually there is already an impressive book about the area, written in 1999 by John Lofland (the pdf of which is online at oldnorthdavishistory.org). This building is the Anderson-Hamel home, built in 1903 by the man who would become the first mayor of the newly incorporated City of Davis, John B. Anderson…but it was not built here. It used to be downtown, but in the 1940s the house was moved five blocks north to make way for a new drugstore. Old houses move around in Davis, it’s not particularly uncommon. Some have even moved since I have been here. It can be disconcerting but I dare say the houses themselves don’t mind all that much. 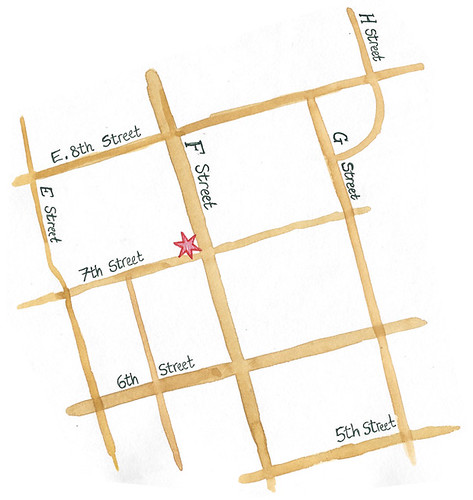 Here is the map. As I sketched this building, I listened to a history of Captain America. Kind of appropriate, in a way.