The World Cup Final is upon us. The semi-finals were a little unbelievable: Brazil, oh Brazil. Didn’t I say, “keep the white shorts“? Didn’t I say that? I think I did. “Those white shorts look better Brazil, they’re lucky, don’t change back to blue!” Brazil wore their proper combination of yellow / blue / white, and…um…. let’s say the last time Brazil suffered a home World Cup humiliation, in 1950, they wore their once-traditional white shirts…and never wore them again. It’s safe to say their 7-1 defeat to the Germans (a scoreline which flattered Brazil) was a little bit more humiliating, given their galactic history since the Maracanazo against Uruguay. Maybe it’s time to change to, I dunno, all green or something. Germany wore the nicer of their two kits, the black-and-red Flamengo kit, but I think they could have run around in big frilly Victorian dresses and still score at least four goals. And then there was Argentina vs Holland, the polar opposite. I got very excited when I saw Holland in orange shirts and white shorts, against Argentina in their proper black shorts with the blue and white striped shirts. They looked right, finally. Unfortunately it was a match so boring, not even the proper-ness of the kits could rescue it. Who won again? I don’t care.

And as we prepare for the final (Germany against who was it again?), an all-Adidas, all-wrong-shorts affair, here is my run-down of the rest of the World Cup kits. I promise to post some of my recent out-and-about sketches very soon, but the World Cup month is nearly over, and boy will I miss it. I’m sure you won’t!

And so that is that. Thanks for sticking with me this far. Oh, you didn’t? Well never mind. It’s back to nice sketches of little downtown buildings very soon. For now, there’s a World Cup Final to watch.

And so after another pause in posting (due this time to moving house) I return with more from my run-down of all the kits from all the teams at this spectacular-except-for-the-quarter-finals-which-were-rubbish FIFA World Cup Brazil 2014. There will be ten looked at here, then another ten which I will review at the end of the tournament. Before I go on though, a few points about kits so far…

As you may be acutely aware I rather like football shirts. Way more than I even like fire hydrants, which is saying something, I know, but it’s true. Every season I eagerly await news of any new kit release, clicking on links to reports of what Partick Thistle’s away shirt might look like, nodding appreciatively when teams like Nantes announce a new deal with Umbro, or shaking my head at the width of stripes on a new Milan jersey. The World Cup therefore is as much about the kits as it is about the players – I know more about the kits, for one thing (whereas I barely recognised half the England team, though that guy up front with the big mop of hair looked familiar, Dwayne Rodney I think he was called). So here is a helpfully-unillustrated run-down of the kits of each team at this year’s World Cup. Non-kit-enthusiasts, look away now (my next post will be a nice urban sketch I promise).

Before I start, here are some kit stats:

And now for my thoughts on the countries. I’m going to give this to you in three parts. It will be alphabetical. And all of the kit illustrations are mine, created in old-school MS Paint…

Phew! Join me for Part Two, which will come when I’ve drawn more kits…

Soccer and Lifestyle, 2nd Street Davis. Click on the image for a larger view. You’ll want a larger view, to get a look at all those lovely football kits – or soccer jerseys, uniforms, shirts or whatever your preferred vocabulary choice is. This is one of my favourite shops in Davis (actually it is my favourite shop), and was the first shop I ever came into when I first visited Davis. I remember chatting that day to the owner, Rami, about Spurs and also Charlton Athletic for some reason. I was just so impressed there was a shop here devoted to my favourite things – football shirts – that I told my wife “we have to move here!” and since I’ve been here ever since that is fairly big. Anyhow, I’ve sketched the window before (in 2010) but never sketched the store itself, so with it being the height of the 2014 Brazil World Cup I figured that now was the right time. I went down there one lunchtime, wearing my recently purchased dark blue France shirt (it is in my opinion the best kit at the tournament) and sketched while watching the first half of France vs Switzerland, a demolition of a match for France out tore the usually pretty strong Swiss up. The owner, Rami, is a friendly guy who knows his stuff (actually they all are, those who work there, always welcoming for some footy chat). I love standing among all the colours of the World Cup shirts; I bought my son the new green Mexico shirt, which he loves because of the little lightning flashes on it. With all the crazy colourful boots (cleats) and all the footballs (soccer-balls) from various World Cups, as a kit-nerd and a footy-fanatic, this is very much my kind of store.

And what a World Cup it has been! The most entertaining yet probably. Certainly the most random-statistic-filled yet. All of which means the knockout stages will be dull tired affairs, but then I said the whole tournament would be so, and I was wrong. England were poor, predictably so, but my adopted team USA has been heroic and will face Belgium in the Round of 16. Then you have the Suarez biting story, which is such a bizarre pantomime villain tale it is almost as if it was all pre-fabricated to give this amazing World Cup a proper bad-guy, to add drama to the plot as we enter the middle act. Who knows. Anyway, of the flags hung up on the wall, the following sixteen are left…

So it’s “Get on the Plane, Spain”, “Get your Coats, Croats”, “You’re a Gonner, Ghana” (works better with an American accent that one), “Cote D’Au-Revoir” (come on, that’s pretty good), “Here’s the Door, Ecuador”, “Herze Today, Govina Tomorrow Bosnia” (I think I heard that one on the Guardian podcast so don’t blame me for that one, my original pun were “Everybody Herz” or “Who’s the Bos” but I wasn’t sure about either), “Iran Away”, “Export-ugal” (yes I know), and “Russian Home to Beat the Traffic”. Phew. (I actually couldn’t think of a good one for England) That is a very small sampling of what it is like living in the Scully household during the World Cup, or any cup for that, and I can’t apologize for that. There are so many punning opportunities I can’t help it. If you like hearing the very worst scrape-the-barrel World Cup punning perhaps you would be interested in following me on twitter, @petescully. Converseley if you absolutely cannot stand it and it makes your head want to explode, maybe unfollow me until after July 13 when my tweets will be all about sketches of little houses I promise you.

And football shirts…I have been meaning to do a run-down of the kits at the world cup, and wanted to give illustrations while talking about (complaining about) each one. But that was too time-consuming, so you have to wait a bit longer. In short, I hate them all except France, Mexico and the USA (only kidding, there are some others I quite like). I think I will do that in a separate post. Tomorrow is Brazil vs Chile, and you’d better get your kit on, it’s going to be a great game. It’ll be followed by Colombia v Uruguay, and Colombia are the better team, but I reckon Uruguay will clinch it by the skin of their teeth*.

(*I actually don’t, I think Colombia will hammer them but the time period for using that admittedly feeble joke is running out and I don’t like wasting opportunities like that) 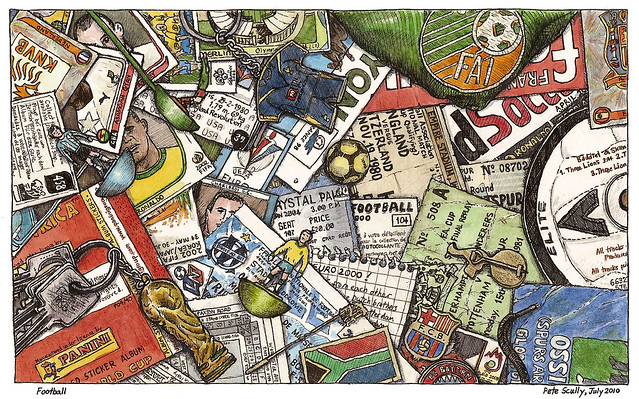 WORLD CUP! The once-every-four-years fest of stadiums not being completed on time, FIFA corruption, corporate greed and hyper-zealous sponsors, dull substandard international football from tired irritable professional footballers, unfettered jingoism, and the world actually believing any of this still matters is finally here, and WE LOVE IT! I can’t help it. For all of my cynicism – and for those of you who don’t know, I am occasionally cynical – my inner ten-year-old leaps out and goes bananas in the build-up to the festival of football. It’s obviously nothing to do with the actual football, I barely remember the last decent bit of football I saw at a World Cup. As an afficionado of football kits and their traditions and trends I am constantly having angry palpitations over the stupid kit regulations and choices at the FIFA World Cup, in fact in global scheme of things very little annoys me more than the idea of Spain wearing red shorts (it’s just WRONG). I do intend, this weekend, to provide you with a long, detailed rant/overview of all of the kits for this year’s World Cup (and if you aren’t interested in my many annoyances about football kits, I might also advise you to unfollow me on Twitter until mid-July). But dspite all of this, I LOVE IT!

Our Panini album is filling up fast, and I have most of my old ones going back to Mexico 86. The drawing at the top as one I did in 2010 during the South Africa tournament. And above, flags of every country taking part, made out of paper mosaics by me and my son, this was a fun project. We’ll be putting them up around our house, maybe taking them down as teams get knocked out.

The World Cup starts today, with Brazil vs Croatia. Most of the games will be on while I’m at work but I actually will get to see this one. And for the record, my prediction for the winning team this year is indeed… Brazil.