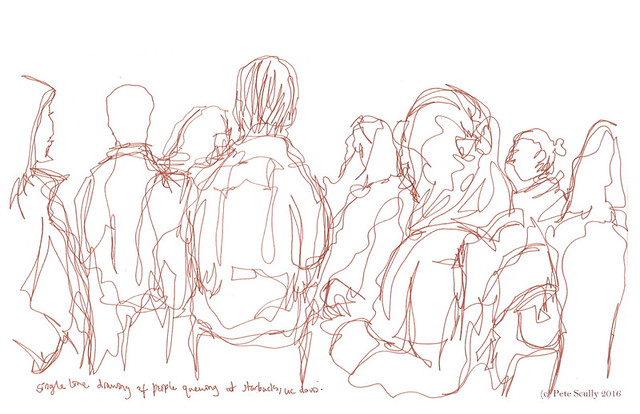 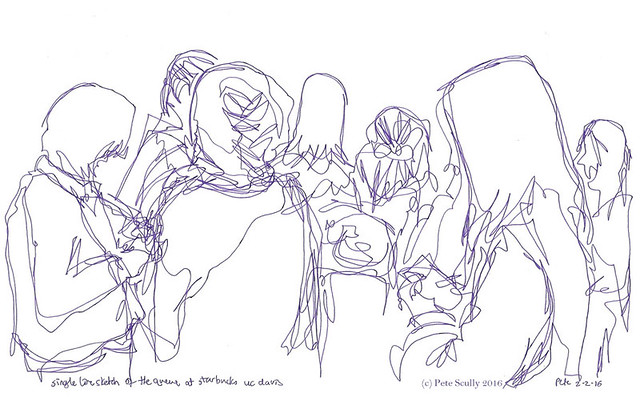 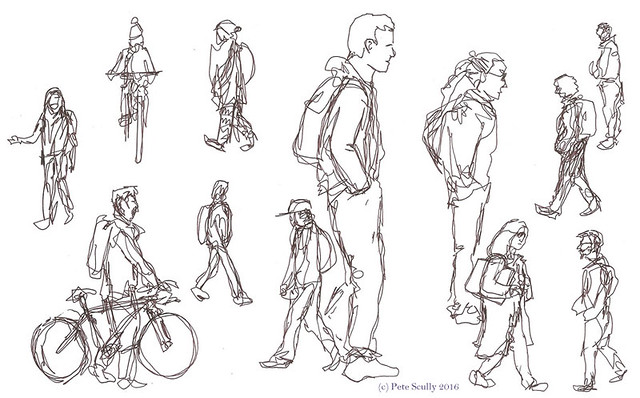 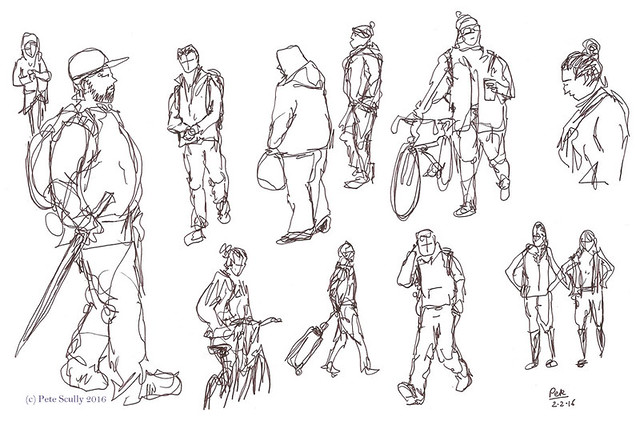 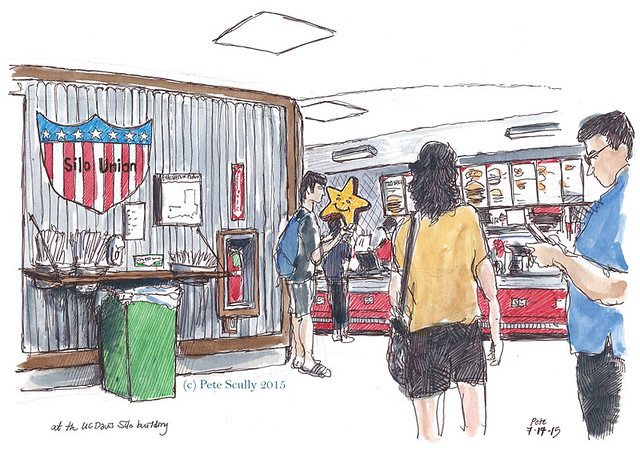 France was fun, but you have to come home. I do actually have a few more sketches from London but they were kind of shoehorned in to the end of the trip, I’ll post those soon. So aftre all those lovely picturesque canals and timber-framed buildings, you get the interior of the UC Davis Silo, where I often eat lunch. this was sketched while waiting for (and subsequently eating) my Carl’s Jr. It was typically tasty, but incredibly greasy. Outside the mercury was rising fast to those unbearable Davis Summer levels. Welcome back to America! When’s my next trip to France?

Panoramas carry on. This is a scene that I used to sketch twice a year, once in January and once in June or July. Then I stopped, because it wasn’t really changing and I was getting bored. I never did a two-page spread, though, so over a lunchtime and a half (the inkwork) and adding colour later on I checked it off the list.

Out of interest, here are some previous versions of the same scene, sketched from roughly the same spot: 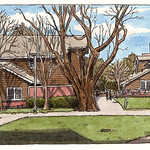 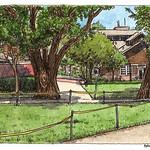 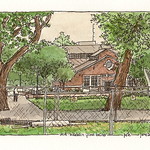 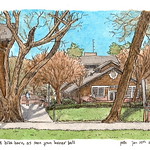 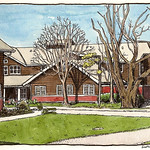 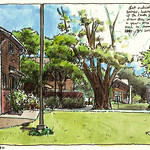 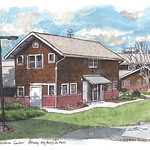 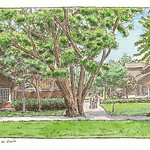 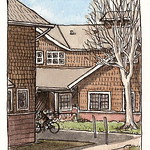 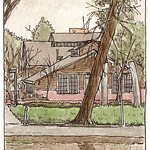 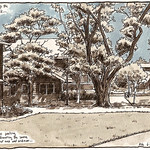 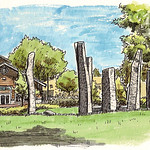 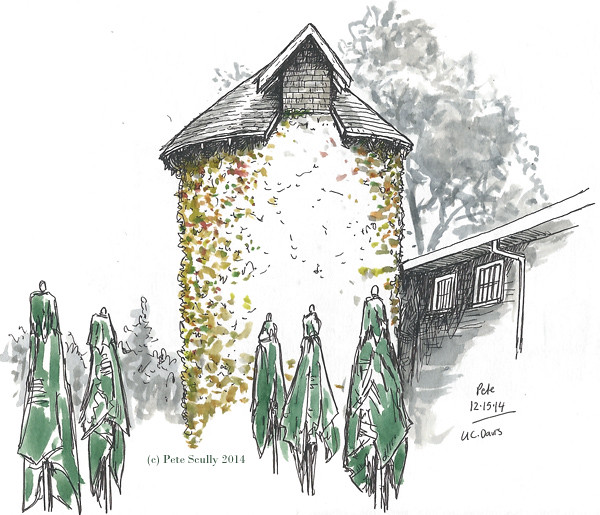 The UC Davis Silo. We had a lot of rain this past couple of weeks. Last Monday it was raining, but I really wanted to sketch at lunchtime, so I did a quick one of the Silo’s tower while stood under some shelter. I wanted to colour it in a little so I did that too, but I had forgotten my water-jar. I crouched down and used water from a puddle. I must have looked a sight. I don’t care. Sketch done.

Click on the drawing to see it bigger. Another panorama, this one being from the Silo area of UC Davis, which as you may recall I have sketched once or twice or a million times before. (Aaaargh, I’ve been in Davis for ages!) Still, I’ve not drawn a two-page panorama from this angle. I had intended to colour the whole thing in (hello laziness, my old friend) but those trees are just a dull green with some crunchy brown so you’re not missing any Fall colours. You can see some of them in the rainy drawing below of the view of the Farmer’s Market at the Silo (every Wednesday lunchtime) which I sketched last month from the staircase you can see on the building in the right, above. Happy Thanksgiving folks! 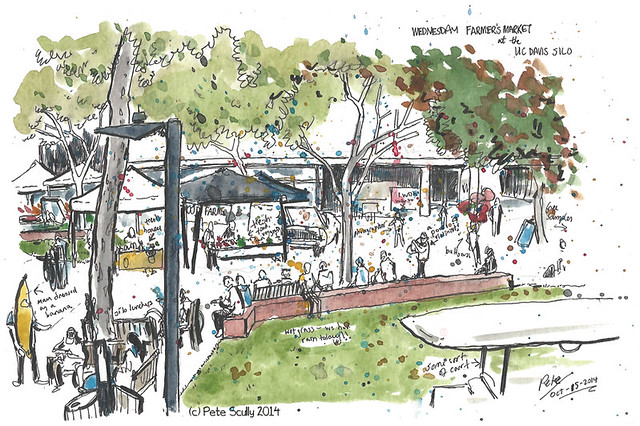 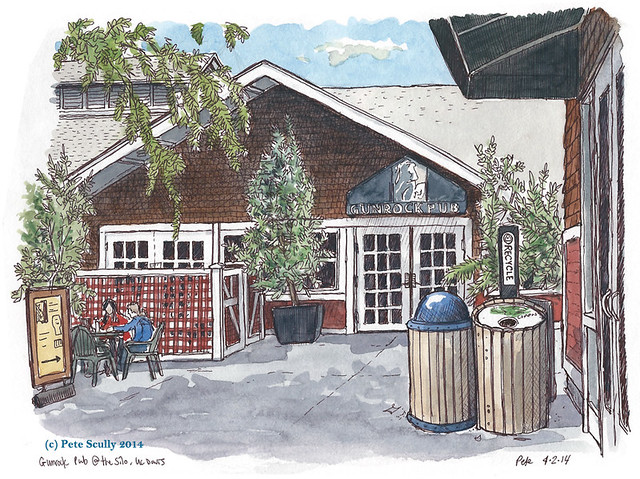 Continuing the theme of these similar looking buildings on the UC Davis campus, this is the Gunrock Pub, part of the Silo complex where I have had lunch so many times. It used to be called the Silo Cafe, or the Silo Pub, but now it takes its name from Gunrock, the equine UC Davis mascot. This, like the others, was furiously sketched over a lunchtime with the colour added in afterwards. I’m filling this S&B Alpha landscape sketchbook fast. 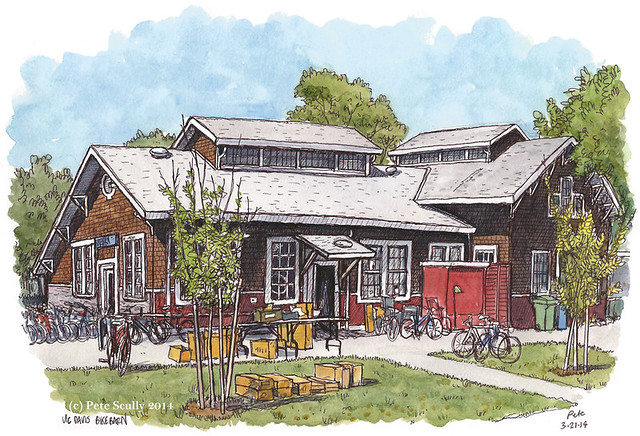 Another of those wooden campus buildings; in fact this is the same building as in the last post, just seen from the other side. This is the UC Davis Bike Barn, which yes I have sketched many times. I did this on Friday lunchtime; the ink anyhow, I added the colour later on. All of those boxes in the foreground were moved away right after I sketched them, so I’m glad I drew them, they add something. Davis loves its bikes. The U.S. Bicycling Hall of Fame is here in Davis, and this really is a great place to be a cyclist. I commute to work each day on my bike, and laugh at those who drive and pay loads of parking. I muts admit though I don’t like drawing bikes, especially when there are loads all parked together outside a building – quite common here in Davis. But I like drawing the Bike Barn.

The building formerly known as Outdoor Adventures. This is at the rear of the Bike Barn, and is another of those old wooden buildings I am currently sketching through on the UC Davis campus.I drew this all in a lunchtime, and added the colour later on (didn’t need little notes or photo references – I know what this building looks like, I pass it every single day). When Outdoor Adventures was based here, there would be canoes parked out the front, people walking tightropes suspended between the trees, all manner of fun happening. Now they have moved to another part of campus and the tightrope walkers are gone, but it does kind of make the building a bit easier to draw when the activity is gone.

I suppose you could call urban sketching on location a form of outdoor adventure. I don’t know if it’s actually adventurous half the time, but it is fun. 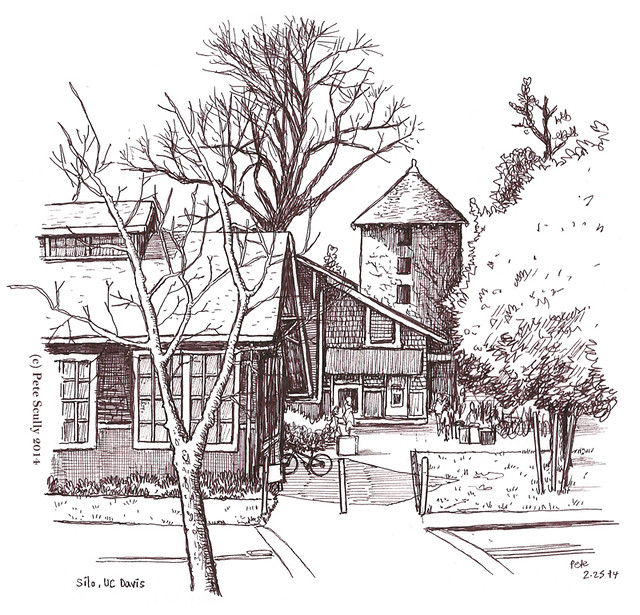 Don’t be fooled by the colourless demeanour of this image – it was very sunny, and warm, mid-70s. The rains have come in the couple of days since this sketch though. this blog is fast becoming a Davis weather report. Spoiler alert – there’s very little to report. The storms last night were fun though, but it was just a bit of rain, not like the deluges you’ve been getting back in England. The rain, of course, first item on the local news, with shots of reporters in their yellow raincoats offering such insights as “people struggled to stay dry” while showing locals strolling about calmly without umbrellas, unperturbed. (The news here does make me laugh; second item on the bill was a story about some hay that been stolen. Yes, stolen hay.) Anyway, to sketch this I sat in the shade of Rock Hall (the building from the previous post) to stay out of the warm sun and listened to a podcast about Merlin of all subjects. I haven’t sketched this scene from this angle in about seven years, amazingly. The big tower is the UC Davis Silo, which of course I have sketched many times. This was done in brown uniball signo pen in the Stillman & Birn alpha sketchbook.

Earlier this week I was eating lunch at the Silo, and being a busy day there was only one seat available, right opposite a young lad from Hong Kong who was sketching people. Good on you mate, that’s what I like to see! His name was Ka and he was really good. He did a couple of sketches of me (with my new scraggly stubble-beard) so I sketched him. Below is his sketch of me. I’m honoured!