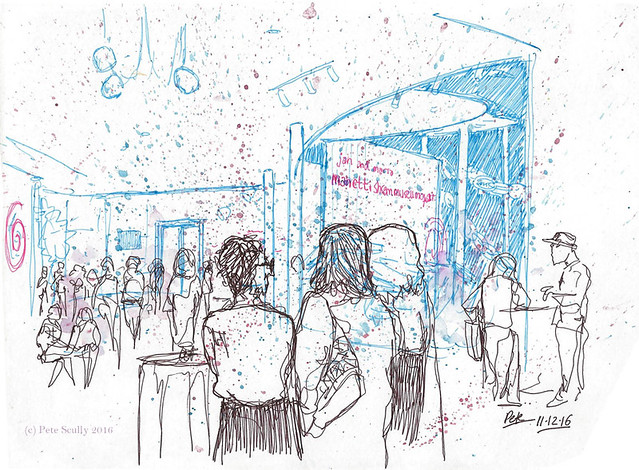 And finally, the art museum is open! The Manetti Shrem Museum of Art is a pretty amazing piece of architecture, designed by SO-IL and Bohlin Cywinski Jackson and built by Whiting-Turner. As you recall I have been sketching the in-construction progress of the building (let’s do a recap in a different post) and so on Opening Weekend, I was invited to attend the Director’s Debut, a special event on the Saturday night for donors and artists. It was an incredibly cool event, and amazing to finally see all of the artwork inside. 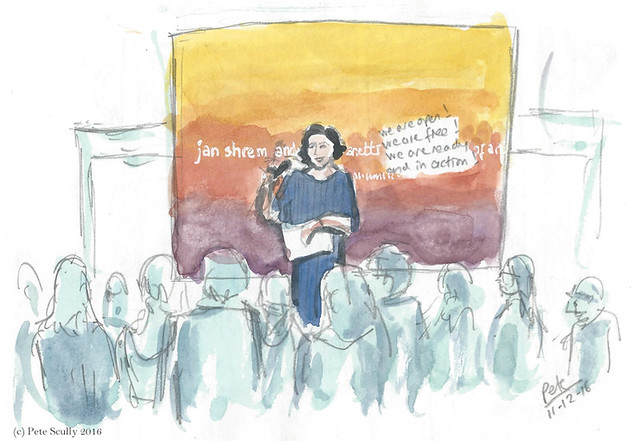 The Director, Rachel Teagle, gave a speech to the gathered attendees, including Jan and Maria Manetti Shrem, thanking them for their support and announcing that because of their patronage, entry to the museum will be free to all. Pretty awesome! I was introduced to Rachel by Prof. Tom Farver, an emeritus faculty member I know (who is one of the donors listed on the big wall, along with his wife), and they also introduced me to the wife of the late Robert Arneson, the ceramicist who made the Eggheads and many of the sculptures in the Manetti Shrem’s collection (lots of toilets!), as well as a few other artistic luminaries. As I sketched the scene above though, a couple came to check out my sketchbook, and introduced themselves to me as the Madonnas (no not that Madonna), Joen and Paul. I was pretty surprised, realizing this was the same Paul Madonna whose books I have, the San Francisco artist who does the All Over Coffee strip, which inspired me to keep drawing in the early days. I’d never met him before though I’d been to one of his exhibits, so it was a nice surprise, and I showed them my sketches from San Francisco the day before. I kept on sketching the evening away, met a few other interesting folks, probably also really well-known artists I’m less familiar with (I didn’t get to meet Wayne Thiebauld though, the local art legend), though I did know quite a few people from the local art world who were there, and one of my artist friends Dori Marshall was there with her art group presenting this colourful cycle-powered sculpture on display outside the main entrance. I drew it below, it was really fun. You could see the colourful circles projected onto the wall behind it when approaching the building, really added to the party. 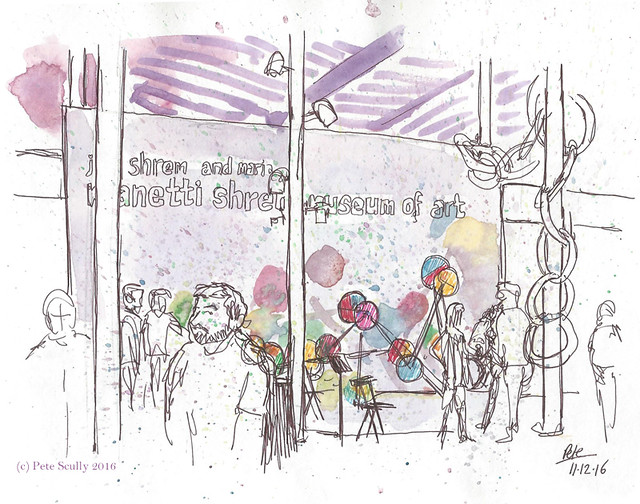 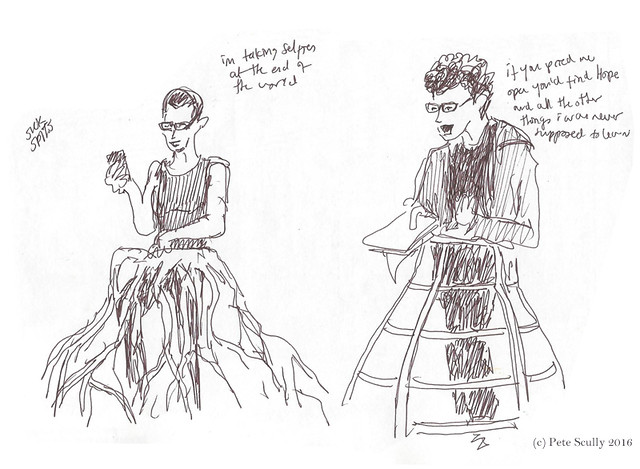 There were some interesting art performances as well. Above, a spoken word group called Sick Spits performed some of their pieces, very performative, especially when spoken in the pulpits of the sculptures I attempted to draw very loosely (this is “five minute people sketching”, Pete, you wrote a book about it…). I love that sort of thing, having a background in performance (well, my undergrad degree in drama) and spoke with the performers afterwards. I need to sketch more performance artists. The food was great too. Top fancy stuff, stuff I didn’t even completely understand. I did have a lovely ice cream, which was made by pouring liquid onto a slab of nitrogen, it was very swanky stuff. I felt clever just watching them make it.

Here are some photos. The big bunch of flowers, well that was from Prince Charles, who couldn’t make it to the event, but he knows the Manetti Shrems and wanted to send his best wishes. Would have been fun to meet Prince Charles, I’ve sketched his house before. after this, the wine and canapes were put away and replaced with cereal for the big student party, which would go on until 2am. Not being a student I didn’t stick around for a bowl of Cheerios, and headed down to the pub to sketch out some of my buzzing drawing energy with another De Vere’s bar sketch. But next morning I had to get up and go back to the Museum for the Grand Opening… 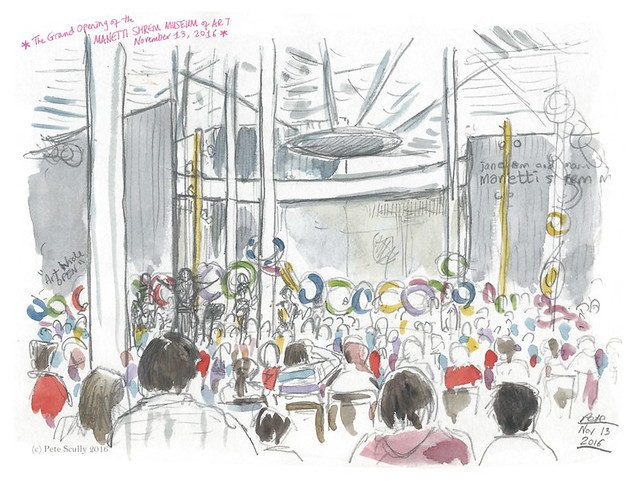 There were a lot of people there awaiting the big event. That large colourful chain decorating the museum exterior was to be formally cut signifying the opening of the doors. Rachel Teagle gave another speech joined by many other UC Davis importants, and we sat on the little grassy knoll with all the other families and watched the proceedings. My son was very excited to sketch so he chose the spot he wanted and we both sketched away. My scene is above (pencil and watercolour), and I also drew him getting down to work. He’s really getting into sketching now (we did a bit more together in London the week after)… 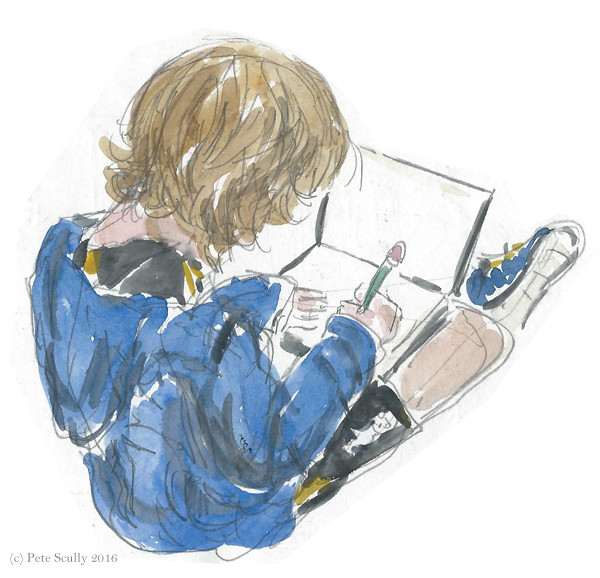 … and he drew the scene below. Great job mate! 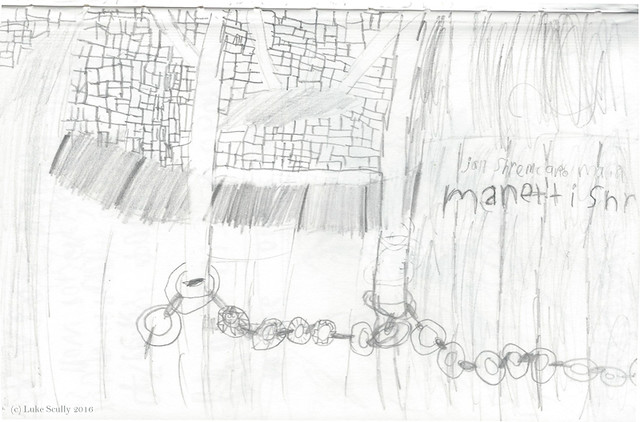 And so, we have a new centre for the arts on campus, a place that really puts UC Davis on the art map. (Speaking of art maps, I drew one recently too for the UC Davis magazine! Details soon). I will do a post like I did for the Pitzer showing all of the in-progress sketches of the Manetti Shrem in one go. 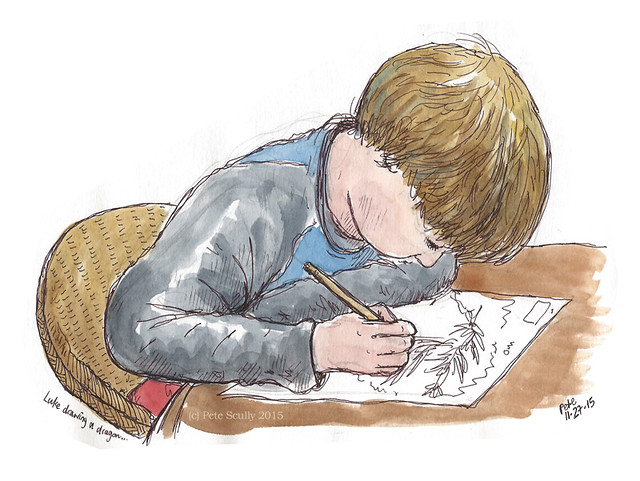 This is my son drawing on Black Friday, while the rest of the family were out Black Friday Shopping. He’s drawing a dragon, he likes dragons. I like dragons too. I’m not very good at drawing dragons so I’m hoping he’ll teach me some day (I’ll teach him how to draw fire hydrants, very handy when dragons are about). I can draw Lego dragons, and we have a few of those.

More form the first Saturday back in London… We all took the tube down from Burnt Oak (or rather, the Northern Line rail replacement bus, which for some unspecified reason took us to Finchley Road on the Jubilee Line – it appeared that the driver got rather lost) and went down to London Bridge, to visit the great Borough Market. My main reason was to get one of those really yummy grilled-chicken sandwiches that I had last year. I had been drooling over those for the past twelve months. After we sat and ate them in the gardens of Southwark Cathedral and listened to a little choir singing about how the tory government are destroying the NHS (I joined in the song, of course), we walked down towards Tower Bridge. There was a little event going on in the gardens beside City Hall, so I got a beer and we all sat down in the shade, where I quickly sketched Tower Bridge. My five-year-old son joined me for some father-son urban sketching, and he did his own version! He hasn’t done such observational sketching before so I was well impressed. He was very specific about getting the City of London flag right, that’s my boy.

I love being by the Thames. I have said it many times before, but I’m happiest by the river.

Yesterday my son played his first ever tee-ball game, and has now entered the big world of baseball. His team, the Orioles, played the Pirates on a lovely March early evening; my Luke, wearing the number 1 (how cool!), made a couple of nice hits and while fielding made a great throw to get someone at first base. Sport at this age is so cute. They don’t keep score in tee-ball, and nobody is really out, everyone gets a chance to run the bases and hit the ball, and it’s all a lot of fun for them. Both teams therefore win (they won’t ever call it a draw!), and they all get snow-cones afterwards. My boy’s growing up; we’re very proud parents!

This was fun to draw: my son’s baseball glove (or is it a mitt? I already drew one Mitt in this sketchbook). The baseball glove is such an archetypal piece of Americana, and naturally it is completely alien to me. My four year old son had his first baseball game today – tee-ball, to be precise, and it was great, good job mate! – and while he is much more comfortable with the old baseball than a learner such as I, he did take to wearing it on his head for periods while out fielding. That is what I would do too, probably.

Last Monday my son was sick so we stayed home and hung out together at the apartment. H wanted to do some painting, so I sketched him at work, but for the most part he was distracted by Fireman Sam on the TV. Treasured moments!

Number 16 in the ongoing series of my son’s shoes, in chronological order. these are the blue sandals, BabyGap. They were worn a long time for most of last year (only now getting around to drawing them). Copic multiliner 0.1 in a moleskine cahier.

My son, watching Fireman Sam with his police ‘helicopter’ helmet on. It’s not often he sits still enough for me to capture a sketch!

It gets pretty foggy down at the Pacific Ocean’s edge. On our last morning in Monterey we took advantage of the cry of the sea one last time before we’d head inland to the hot Valley again. I painted the above pretty quickly; I was out of clean water for my paints so I used water from the Pacific Ocean itself to paint with. Seemed appropriate. This was still Pacific Grove, but further out, on the way to 17-Mile Drive.

My two-year-old son decided he’d like to help me with a bit of painting, so I gave him my paints and my brush, and even my nearly-complete brown sketchbook, and he painted the above. I think it’s just brilliant! He has a much better eye for colour than me. I can see us doing joint sketchbook projects in the future!

This last one is from the day before, when we had lunch at an interesting little place called Hula’s, where there was a lot to draw. And that was our short trip to Monterey. At some point soon I might start posting all the drawings I’ve done in Davis since the Symposium…

The ‘Little People’ airplane, we all had one as kids, and my two-year-old has one. He loves airplanes, loves to read about them, even knows his Spitfires from his Messerschmidts, and loves airports; he’s been on enough flights already, he’s an old hand. This plane is full of wooden letter-blocks, which in his universe are actually suitcases, luggage, and that makes sense.

This drawing is appropriate, as this weekend is the finale of plane-crash drama/mystery series Lost, a show I’ve followed avidly ever since we moved out here. It has been a great show (particularly season 4), but last year started to get a little, um, confused, and this season has been a let down to say the least. It’s almost as if they decided all those things which they built up as important over the years – the Others, Dharma Initiative, Ben vs Widmore, even the time travel stuff introduced last year – are in fact irrelevant because they’ve changed the story. They had to resolve the Widmore character (aka Jim out of Neighbours) so they brought him back and had him shot in the cupboard like a, well, a pussy to be frank. All season they’ve been showing us this alternate timeline and wasting time with new characters who are ultimately completely unimportant (ahem, Ilana). So the long awaited finale is tomorrow, and rather than excited, I am feeling like I just want it to be over and done with. At the least, I want to feel that all those years geting involved with the show and watching it with eager anticipation were not all for nothing. I don’t get into TV shows much, so it would be nice for it to be at the least satisfactory.