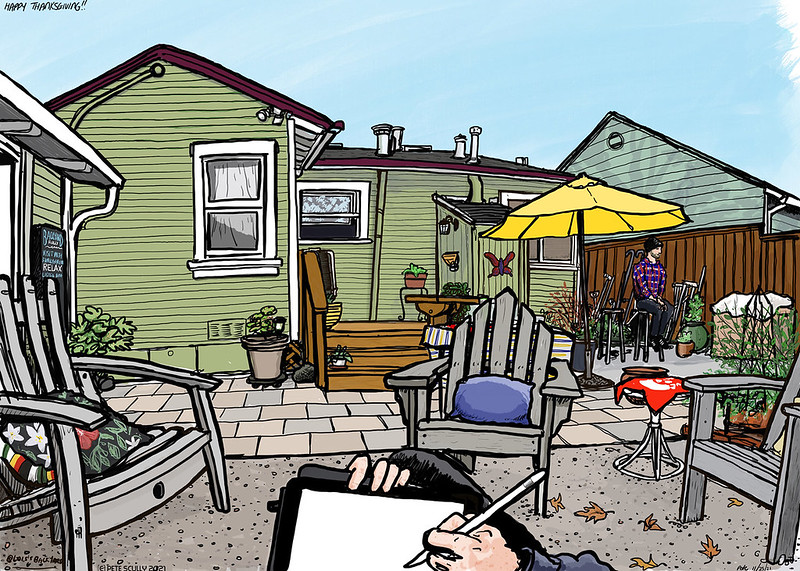 Happy Thanksgiving! Oh wait it’s January the 7th. Right, well this sketch drawn on the iPad in my mother-in-law’s back yard in Santa Rosa was done on Thanksgiving 2021, the sky was very blue though the light was a little muted so shadows were soft, and we did absolutely zero Black Friday shopping the next day because ha, no more of that. Remember when they’d get up at 4am to stand in the cold outside Best Buy or Target? Those days are gone. Thanksgiving as you know is the big American holiday where you eat turkey, mash potatoes, cranberry sauce, all things I love, but I really love stuffing, and I really love gravy. Stuffing and gravy, oh man. I love a roast.

I’ve drawn this back yard before a couple of times, and it has changed a lot over the years, but here’s a very early one from way back in early 2007, when it looked very different. That’s the old dog Brutus asleep there, long since departed. That tree is gone too. This was when I drew in a WH Smith cartridge paper sketchbook from England, before I started using Moleskine sketchbooks, long before any iPads, and I was still figuring out watercolours, I was still using a fairly cheap but cheerful set from the university bookstore. I can tell exactly the colours used (payne’s gray mixed with ultramarine and purple lake) to get that specific shadow on the door, because I still sometimes mix those three to get the colour of shadow I want, and it was a bit of trial and error for this one at the time. I enjoy looking at the sketches from those first couple of years in the US, and I am glad I felt it so important to draw them. I still do. 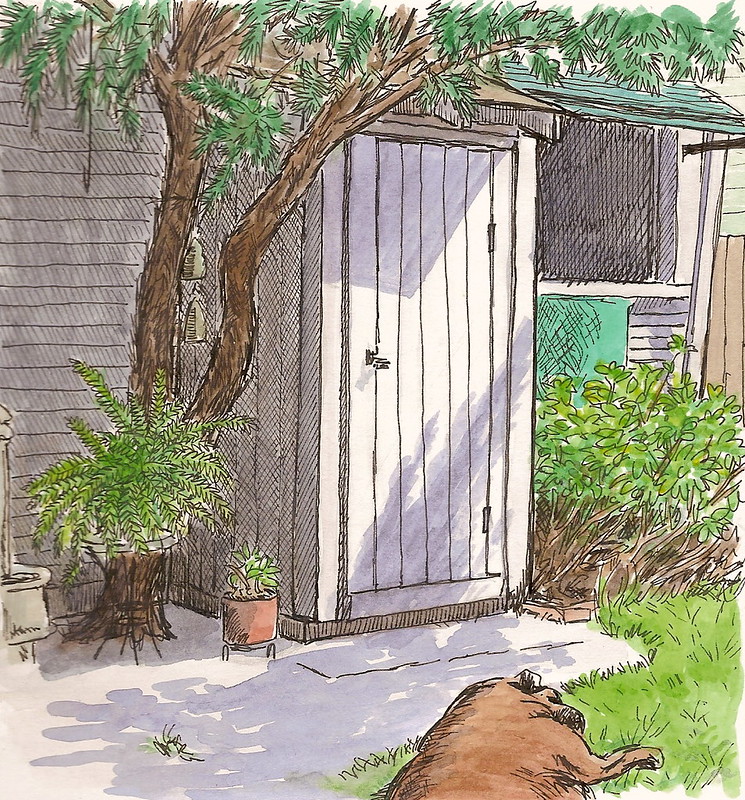 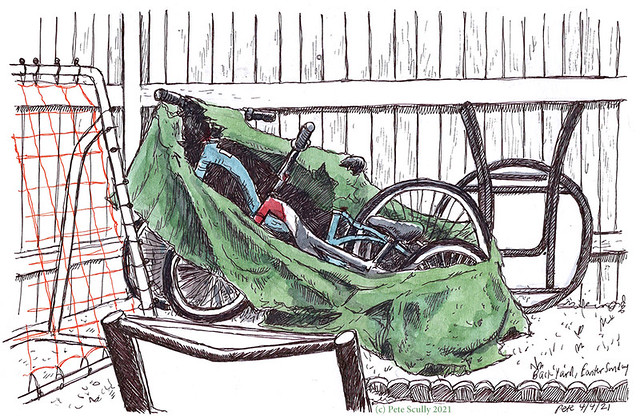 I mentioned gardens in my last post, and this is my ‘garden’. It’s a small back yard that we could do a lot of work in, if I were a garden person, which I’m really not. Although I say that, I have spent a lot more time out working in this yard than any other, pulling up weeds and trimming down branches, but it’s not a space we spend a lot of time in. We did have a lot of unwanted junk out there that we ended up bringing to the dump, which made it much nicer out there, although there are still two old bikes (one of which is not actually old, it was just not ever really ridden, but has been out in the yard for quite a while now so probably needs a good servicing before it can go out on the road). The other is an old bike of my son’s when he was smaller. The tarpaulin has largely perished. Against the fence that is a foldable table, we don’t really use that much. The thing with the orange net is a rebounder, useful for soccer practice, if we ever used it for soccer practice. It’s too big to bring with us, and our yard is too small to use it effectively out there. This is only one corner of our small back yard. Let’s not talk about the black widows. We have an understanding, I pretend they don’t exist, and they don’t get stamped on when they come out. There are a lot of them in Davis, but we aren’t talking about them. So yeah, I’m not a garden person, but I think maybe I should spruce it up a little. I have all these ideas, but I’m not super handy, or practical. But it’s a lot better than it was. A few years ago there was this massive bush, a tree really, sprouting out of the ground there. It grew fast, and had big ugly lemons on it, and its branches had these sharp thorns about an inch or so long that would go straight through your hand, and destroyed a few bike tyres. It grew high, right over the fence, dropping those big lemons with faces like Victorian thugs onto the path below. It took a while and several sharp cuts, but I defeated that bush, with my massive lopper and my sharp garden scissors. It remains one of my greatest victories. I put it on my CV. That lemon bush thing has never returned. There was another tree, an actual tree rather than an upstart bush, growing much closer to the patio door. It was ok at first and provided a bit of shade, but eventually it got a little wild, and started rattling against the windows. Despite lopping off as many limbs as I could, this one required professional help so we got someone out to take care of it. And I mean “Take Care Of”, I don’t mean we got someone to come round and give it a foot massage. That tree’s days of knocking on bedroom windows are over. 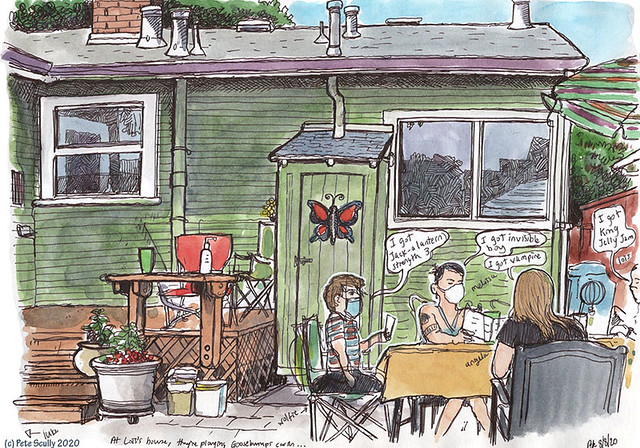 We took a drive over to see family in Santa Rosa, not something we;ve done much of lately since the pandemic started. We sat in the backyard of my wife’s mother, all socially distanced and wearing masks. My nephew had grown taller since I last saw him, so much time has passed. They all played a game of Goosebumps around the table while I sketched from a different table. The weather was cooler than in Davis. My mother in law’s back yard looks lovely now, it has all been done up nice. I have a feeling if this pandemic keeps up like this we’ll be having Thanksgiving and Christmas dinner out there too! I want this whole thing to be over, back to normal. I want to fly to England to see my family there, but this is where we are right now so we do what we can. It was nice to at least go and do this. Now this summer is flying past, working from home, the world outside is literally burning as I write with clouds of ash and smoke from nearby wildfires, mass evacuations going on, firefighters working around the clock to keep us safe, the air outside thick and choking, the sky a dull orange, all the while a global pandemic is going on, and then there’s the bloody election season upon us. At least the Champions League football has been fun. 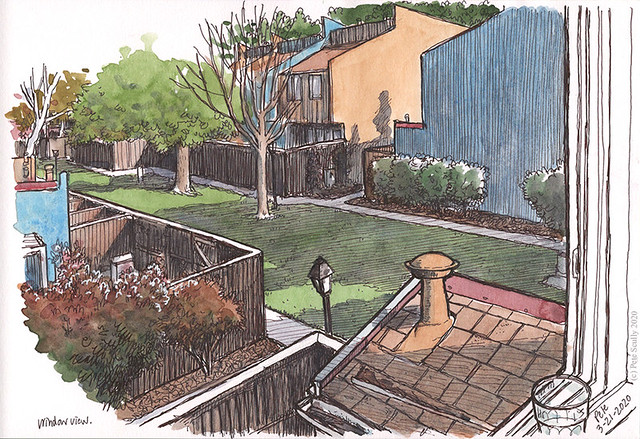 The days indoors continue. So I am looking out the window. I did get out for a run yesterday, staying away from people, and this evening (Sunday) I managed to go out for a walk, this time avoiding the green belt path I know lots of people take, to social distance as much as possible. I ended up walking down some streets I’ve never explored, and was amazed at some of the designs of the houses. I’d love to draw those. Right now is not a good time to be on the streets sketching. So, looking out of the window it is. Amazingly I have never drawn this view from the upstairs back window before. I had always thought of putting a desk in that room and using it as an office, but we never got round to it, and now it’s just basically the Room of Requirement. It’s where guests sleep when they visit, and for all I know there might still be some in there somewhere, finding their way through all my travel books. The cats love it in there, full of places to hide, though it’s not much bigger than a broom cupboard. But ti does have a pleasant view, so my project now during this period of indoorsiness is to Do Something About It. Isn’t that all our project? And yet, with this whole thing going on, even getting out of bed is a struggle. I did find some time a couple of days ago to Do Something In The Yard though. My yard is beyond help, but since we got someone to get rid of the tree, it feels a bit more manageable. So I cleared a little space and built a soccer rebounder (not pictured in the sketch below as it’s a bit too far to the left). I had ordered it ages ago, but it turned out to be bigger than I thought. I finally built it a couple of days ago for my son to use in the yard, but it really does rebound a lot, so will take a bit of control. Sleeping in the foreground is one of our cats, Whiskers. They are indoors cats, but I let them run around and explore the yard. They love all the nooks and crannies and webs and branches, and Whiskers likes to get into weird-cat-noise contests with a neighbour’s cat, and guard the bottom of the fence while our other cat Sawyer just rolls his eyes. 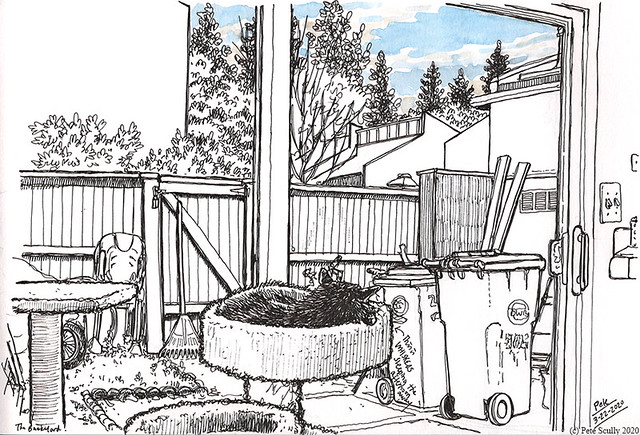