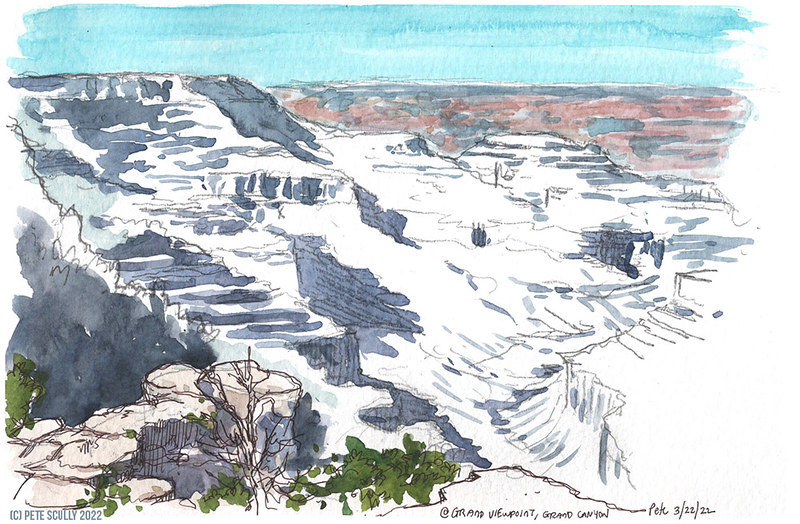 After leaving Flagstaff, we drove north through Arizona, watching the landscape continue to change. We passed through the Navajo Nation – our clocks automatically went forward an hour from the rest of Arizona time. It was interesting as we stopped off for a bit to eat as well, the indoor mask enforcement was a much more in place on Navajo land than in the rest of Arizona, it was more like California. The Navajo Nation covers a pretty vast area, the largest Native American reservation in the US. After driving through for a while, there was a pinkish glow to the landscape ahead of us, and it was clear we were approaching canyon country. As the road turned we would start seeing gorges open up, wow that’s quite deep, and they would start getting deeper and you could see that ahead of us was something big that we couldn’t see. We arrived at the Grand Canyon National Park by the entrance furthest to the eats, whcih was a pretty great idea. I was expecting something like we experienced at Yosemite – long lines of cars, massive overcrowding, a couple of hours sat in traffic, but there was none of that at all. In fact I was incredibly impressed at how uncrowded the Grand Canyon NP was. When we first arrived and caught our first real view of the Canyon itself, the scenery just blows your breath away, it takes your mind, it’s like nothing you could really believe. We were here before, 20 years ago, long before our son came along, so this was his first time. We started out at Desert View Point, taking lots of photos, getting the National PArk stamps in my sketchbook, and I did a sketch of the Desert View Watchtower (below), built by the architect Mary Colter back in 1932, inspired by the ancestral Puebloan people of the Colorado Plateau. We also sat for a while outside by the rim and just looked, while I sat on a ledge and drew the scene above. I could only paint the shadows – the colours of the Canyon are a bit overwhelming for a predominantly urban urban sketcher like me, but I wanted to try a bit of Canyon painting. There was actually some snow on the rim, and the weather was bright and sunny but a little cold still, and I still wore my nice warm scarf. 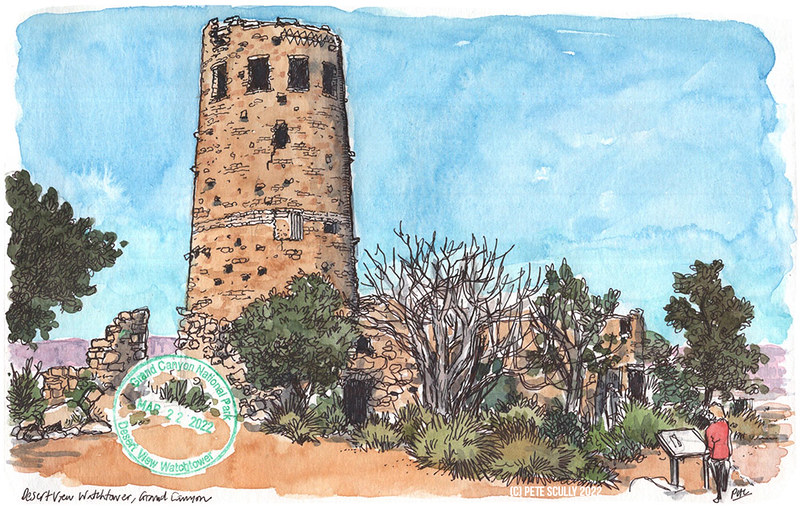 We drove further along the rim of Canyon to the Grand Canyon Village, where we were staying at a lodge right by the rim. Incredible location, we were lucky to get that. I caught the bus back down towards the South Kaibab trailhead. I was eager to do some hiking into the Canyon, and that was a pretty good trail to be taking on. The shuttle bus services at the Grand Canyon are amazing, all free, very regular, often with entertaining and knowledgeable drivers. I was going to be hiking alone down the South Kaibob trail as my family were resting up a bit, and I went about a mile or so down the narrow zigzagging paths until I reached Ooh-Aah Point. The temperature rose considerably as I descended – apparently the base of Canyon it is as warm as Phoenix, even if there is frost on the rim. I sketched at Ooh-Aah Point, making Eric Cantona jokes to myself  (“Ooh-Aah Canyona”). I got a lot of spectacular photos down there, but you only get to see my sketches, because I’m not organized enough to find and post those too. The Grand Canyon is so deep, man. Looking down at the hikers below who continued down the trail was like looking at ants. It’s nearly 5000 feet to the bottom, where the Colorado river keeps on carving and curving, and a good ten miles across to the north side. While my plan was just to hike to Ooh-Aah Point (about a mile or so) before climbing back up again to meet up with the family, I did start walking down the path a bit further, as I was making good time on foot. Then I realized just how steep it was, and how hot it was in the sun, so I headed skywards again. The climb back out was considerably more strenuous – I can see how hiking the Grand Canyon is like mountaineering in reverse, where the hard part is the bit when you are tired. You have to be careful, and drink lots of water, and there is no water on the trail itself, you have to bring a lot with you. I was pleased to get back to the more shaded zig-zagging paths near to the top, but there were people who were just knackered all along the way. I got to the top again and it felt like an achievement. I do like a hike. As I neared the rim, I saw some people throwing rocks into the Canyon. Not just the youths, but their parents too. Someone else told them not to do so as it was dangerous, but they just glared and kept on doing it anyway. I had seen people down on the trail, hikers with kids, and if a stone thrown down had hit them it could have been serious. I was right above them so I shouted down in my clearest Burnt Oak, “OI! STOP THROWING THEM BLOODY STONES! THERE’S PEOPLE DOWN THERE!” I like to think it echoed around the valleys like the Supreme Being in Time Bandits or something, but they did stop. Fools are gonna fool. 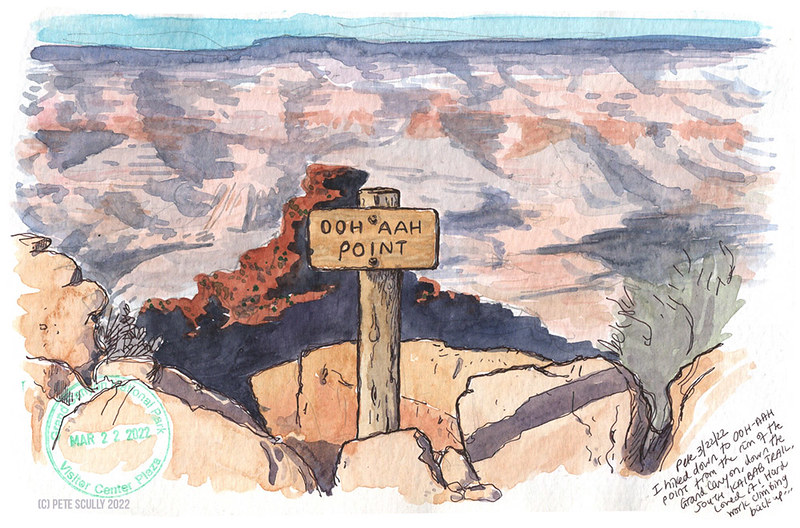 We stayed in a nice little room at the Bright Angel Lodge, just footsteps from the edge of the Canyon. At night there were so many stars out my poor stretched eyes were popping out of their sockets. I love a bit of star-gazing. We slept ok, except for the noisy heating unit in the room, and I woke up super early before the sun came up and went outside to watch the day break, and of course do some early-morning sketching. It was pretty cold. I drew the small building near our lodge, the Lookout, which dates back to 1914. The Canyon was being filed with deep purple shadows and creamy orange light, but the sky was crisp. Hikers were already out, tenacious groups starting the Bright Angel Trail (that’s a hike I would like to do some day). I do get excited by all the hikers, it’s something I would like to do more of. The only thing is I like to sketch, so I probably need to hike with people that need to take lots of breaks. 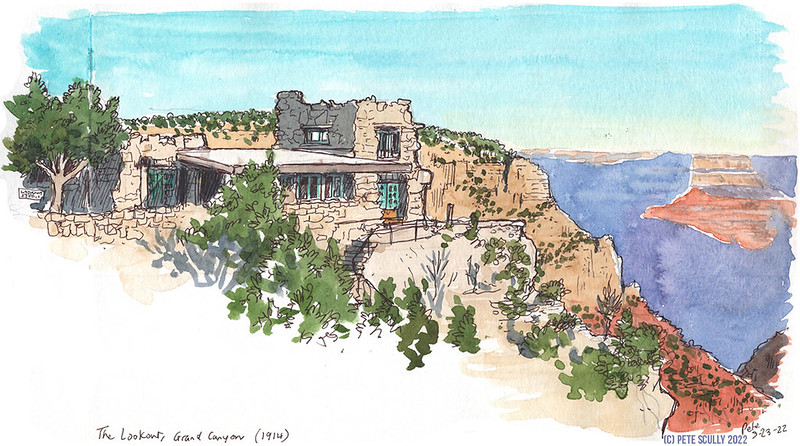 After drawing this, I was starting to feel quite cold but it was still early, the family was still sleeping and I had another sketch in me. There was a fire hydrant perfectly placed not too far away. Rather than go on a little solo morning hike, I sat and drew this instead. And then…my paints froze. They were acting unusual, beading up in places, not acting how my watercolours would normally act in warm dry Davis. I tried paint more but there was frost in my paint tray. This has never happened to me, but I’d got about halfway through (I had painted the whole previous one no problem) before I had to go back inside to warm the paints up. I was quite pleased with that background though, but Grand Canyon painting is a whole ‘nother ballgame. Fire hydrants however, I know those. 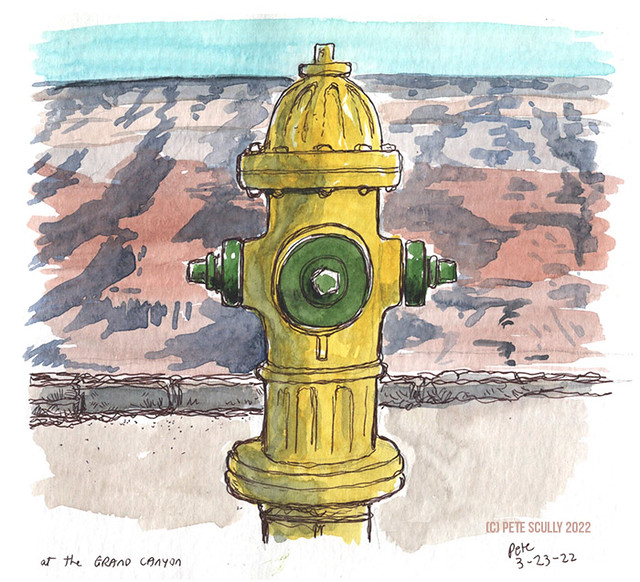 On that second day we did do a lot of exploring, taking the shuttle bus out to the Hermits Rest, on the western end of the park, and did a mixture of hiking and shuttle-bussing back along the rim, taking photos along the way. I did start a couple of sketches, but just quick pencil outlines I never finished off.  The one below was one from the sunset the evening before, by the Grand Canyon Village, I drew all the pencil and then added in the colour after. 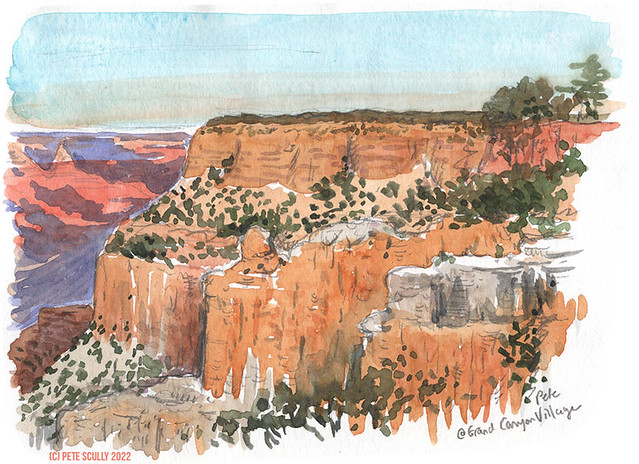 This was an amazing trip and I’m so grateful to my amazing wife for arranging the whole thing and taking us everywhere, she has all the best ideas. We left the Grand Canyon and spent a couple of nights at a hotel resort in Scottsdale (next to Phoenix) where the weather was much hotter, I did no sketching, and we spent a lot of time going around the lazy river. I even saw a real life rattlesnake and a real life gila monster (not to worry, both were in glass cases in the hotel!). It was a nice trip to Arizona. 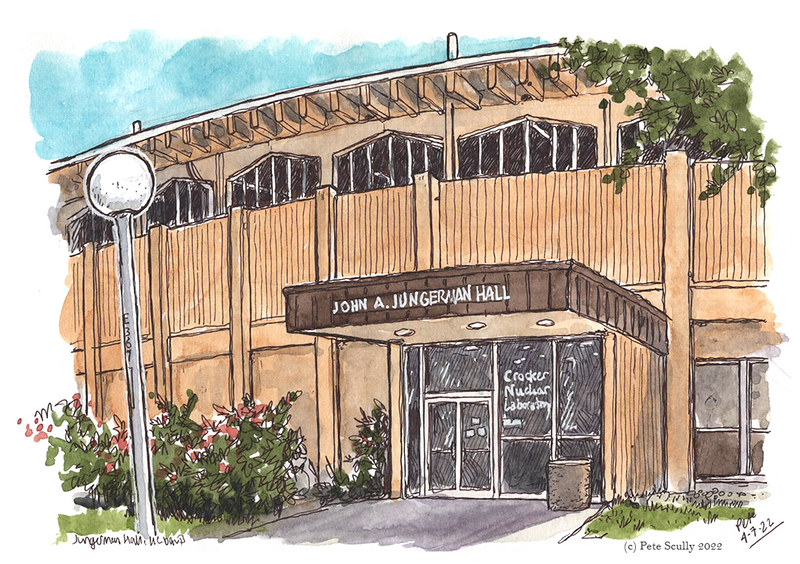 Before we get to the Grand Canyon, a couple more UC Davis sketches to tide us over, sketched just a few yards from each other (albeit facing in a different direction). Above is Jungerman Hall, which houses the Crocker Nuclear Lab. They do lots of stuff with their Cyclotron. I can’t pretend I know what the Cyclotron does but I imagine it’s what the Autobots would have turned into if they had landed on Earth before cars were invented, and they just transformed into bikes. Still, I bet it would be cool to draw, hint hint. Below, the side of Bainer Hall, which is where lots of Engineering types can be found. From above, it kind of looks like a chunky Y-Wing fighter. Not everything is about Star Wars, of course. That strange rocket shaped tower protruding from the roof looks nothing like anything in Star Wars, because as we know vehicles in Star Wars don’t rely on rocket propulsion to leave their respective atmospheres. I’m not an engineer, nor a science fantasy writer, so don’t quote me on that. “Jungerman and Bainer” sounds a bit like it could be the name of a cop show, neurotic perfectionist Jungerman partnering with brash no-nonsense Bainer, the pair not getting along at all when the chief puts them together to investigate some serious crime, having a hunch they’ll make a good team to crack the case, but they end up getting caught by the main villain and tied up, where they form a bond and use engineering know-how mixed with blunt force to escape and – let’s face it the pilot of this show is totally getting cancelled, isn’t it. Still more interesting than Jurassic World Dominion. Maybe the TV execs are cancelling it because there’s not enough dinosaurs. Anyway, enough of that tangent. I’m done scanning all the sketches from my recent European trip, so hopefully those will all be posted here soon, probably over the course of the next few months at my rate. 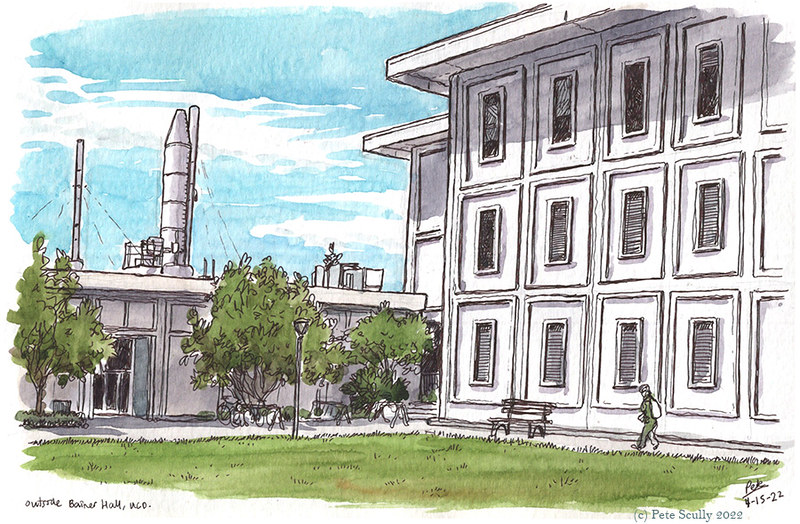