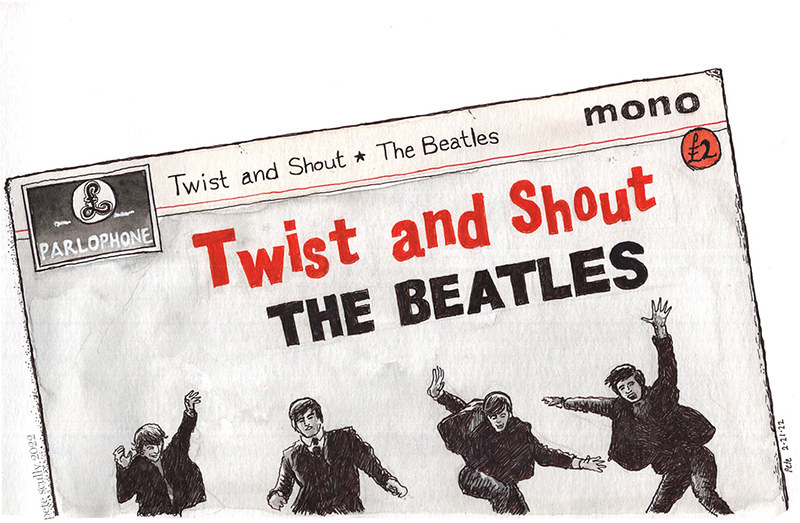 Time for some more Beatles story. This is an old EP (“extended play” for you modern kids, not an album or “LP” – long play – and not a single, but it’s the size of a single, and it has four songs on it instead of two. A bit like you would get on a CD single in the 90s) from 1963, “Twist and Shout”. It’s an original copy, with the yellow-lettered Parlophone, and I’ve had it since about 1989, when I would go around second-hand shops and car-boot sales looking for old Beatles records to add to the collection that my uncle Billy started me off with. As you can see it still has the little two quid sticker on it. I forgot I still had this, sitting in my cupboard, so when I came across it again I thought that would be a good opening page for my new Moleskine sketchbook. A sketchbook that I have now closed, and started a new one (I’m very far behind posting). Still, with the rekindling of my life long Beatles obsession with the release of both the “Get Back” film and Paul McCartney’s “The Lyrics” book at the end of 2021, now’s a good time to post this. Macca just turned 80 over a week ago, so I’ve been gorging on Paul’s songs lately, but Twist and Shout – perhaps the Beatles’ most famous cover song, recorded in a single take and an absolute belter musically – is very much about John and his ripped-to-shreds voice. I bloody love it, I love the “aaaah….aaaah…aaaah” harmonies, the call and response with George and Paul, I love the leather-jacketed guitar riff which feels it has bounced straight off the sweaty walls of the Top Ten Club in Hamburg, I love Ringo’s excited drumming, I love that this is the sound of a band that absolutely loved playing music and gave it their all. It’s also got “A Taste of Honey”, “Do You Want To Know A Secret” (I quite like that one) and “There’s A Place” on it, but after the raw energy of Twist and Shout, these are like cups of tea to help you calm down.

I still have most of my old Beatles records, the ones I either got my uncle when I was 12 or 13, or ones I picked up in second hand shops and car boot sales around the same time, a mixture of originals, imports or old reissues, or new (new for 1988) reissues given to me as Christmas presents, like my beloved and much-played copy of the White Album. I never had a big record collection, but it was decent and full of personal memories. I don’t even play records any more; I have a small record player here now that my wife got me ages ago, but it plays records a bit too fast, and the sound comes out of a little built-in speaker on the back, not out of two big speakers in wooden boxes perched on top of my wardrobe like in the olden days. The sound of records couldn’t be beaten, that crackle of the vinyl, the realness of it. Sure CDs came along and suddenly we could hear it all, but the vinyl experience was something special. In Beatles albums especially there was usually a distinct side 1 and side 2 feel that is lost in modern albums which are – or were? – one-side constructions for CDs, now for download albums. There was a reason the ‘Ringo song’ was sometimes track 1 of side 2, it made it easier to skip it when you flipped the disc over, now it’s in the middle of the album and catches you out. Ah, I’ve learned not to mind “What Goes On”.

I’ve got a million things to say about the Beatles and they’ll always be my comfort blanket to escape back into, same as for many people, but right now I’m just enjoying the post-Get Back world and spending time with the guitar again, which I’d not done in years, even messing around on the keyboard, and of course the ukulele. I recently bought my first new guitar in 16 years, and last week got my son his first ever guitar, so there’s a bit more music back in the Scully household again.

Yes, it’s been a couple of months without a post on this sketchblog, but in my defense I’ve been lazy. Well, I’ve also not bought a new computer yet and my current one that I use for all my scanning is making a noise like Evel Knievel, so I’ve been reluctant to turn it on and catch up with the scanning. I have sketches from Arizona, Nevada, London, France, Belgium, and even Davis. Finally the other day I braved the loud slow machine and got it working enough to scan about half of those sketches. I need to work up the courage to turn it back on again and scan the rest. With everything going on in the world right now, I don’t have headspace for a noisy belligerent computer and a mountain of scanning, but at least some of it has been done. Now for the storytelling. This sketch goes back all the way to St. Patrick’s Day, and was drawn on 3rd Street, Davis. It was going to be all coloured in, but you know, one purple flag and a green tree was all it needed in the end (also, lazy). It’s hard to believe that it is nearly July now. I did do a race back in March though called the Lucky Run, it took place around north Davis where I live, and was St. Patrick’s Day themed. I wore my 1994 Republic of Ireland shirt, the one they wore at World Cup USA 94 when Ray Houghton scored that great goal as we beat Italy 1-0. I still have a t-shirt my mum got me a couple of days later at an Irish music festival that says “We kicked Italian Ass on American Grass”. Probably wouldn’t wear that now; probably wouldn’t fit anyway. I have another shirt my mum got me when Ireland beat England in 1988 at the Euros, “these boys made history” with a photo of the team. There were probably ruder ones available given the immensity of the occasion and the feeling between the two nations at the time but I was only 12 during Euro 88. I was 18 during USA 94 but the Republic’s huge baggy 90s-style shirt still feels massive on me even now. That made it nice to run in though. I’ve decided that for all future races I will wear a different classic football shirt. For the Davis Stampede in February, I wore the Hearts of Oak (from Accra, Ghana) shirt from a few years ago, that got a comment of “cool jersey!” from the race commentator as I crossed the line. I have another race in a couple of weeks, the Davis MOOnlight run, which is an evening race so I should wear something light coloured, I have a snazzy Ghana shirt, or maybe one of my Spurs shirts, another baggy 90s one maybe. Yes, something baggy, because I’ve not been exercising and practicing quite as much as usual lately so I feel a bit out of shape. I need to get back into routine, back to running several times a week, back to the gym, back to early starts; but you know, lazy. Hopefully this race will inspire me back to get out there.

Anyway I will also get back to posting my sketches and stories here again, some interesting travels to talk about, and some more travels yet to come. I’ve finally crossed the Atlantic again after three years and intend to keep doing it, make up for lost time.