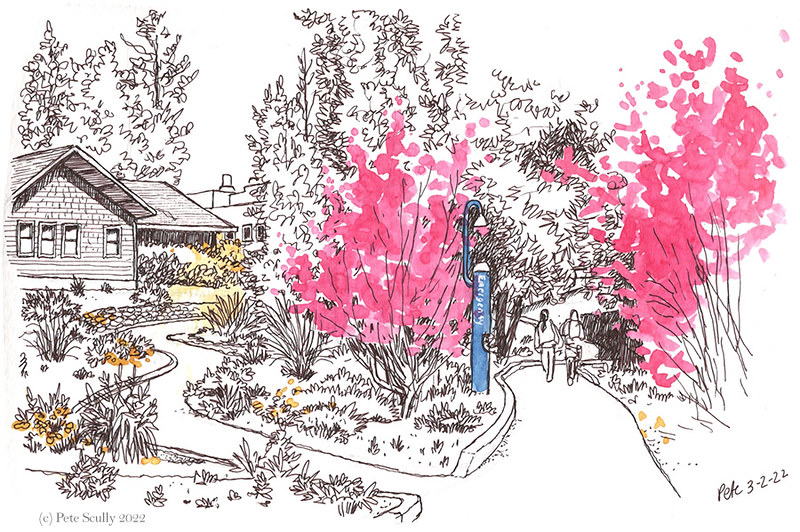 The Redbuds are out. This is in the Arboretum at UC Davis, the section closest to where I work is the Warren G. Roberts Redbud Collection, which blasts into life at this time of year. Here’s a little bit of info about it: https://arboretum.ucdavis.edu/warren-g-roberts-redbud-collection. The Redbud is a native Californian plant, which grows in the foothills. I sketched quickly. A lot of people in the Arboretum that day, seemed to see many people I know, or who knew me without me knowing (or recognizing) them. I do sometimes get a “hello!” from people who I’ve obviously met before but don’t recognize (either due to the masks, my legendarily bad eyesight, or just that I never recognize anyone), so I always just say “y’alright, how ya doin’?” back, and let my slow mind catch up with who it might have been afterwards. This happened just last night on the way out to the soccer practice field, I got a “hey Pete, been a while!” from someone but for the life of me I don’t know who it was, I just waved a “yeah man, good to see you!” although I couldn’t actually see them. My phenomenal lack of being able to recognize people goes back a long way. Back in the 90s, I was up in Yorkshire visiting a friend who happened to work in a nightclub, so after arriving on the late bus from London I went by there to wait for them to finish and I spotted one of their friends, who I had met the previous time I’d been up there, Bertie I think he was called, drinking with a couple of other lads. So I went up and started chatting, “how’s it going, good to see you, yeah I had a long journey up here, six and a half hours on the bus, not very comfy, bit cream-crackered now,” the music was loud so it wasn’t easy to hear each other, I anyway after about ten minutes he says to me, “who are you though? I don’t actually know you.” Because it wasn’t Bertie, he had no idea who Bertie was, or who I was, or why I was talking to him about the state of the seats on the National Express. I just went, “oh, you’re not Bertie, sorry!” and went off to hide forever. I might have done that thing where I take off my glasses and rubbed my eyes like in a cartoon. To be honest I probably wouldn’t have known Bertie if he’d jumped out of a big cake. I don’t even remember if he was really called Bertie, he was probably called Bobby or Barry. Anyway, I’m not great at recognizing faces, so if you do see me and I look a bit nonplussed and give the random “hey, how’s it goin” response, that’s just my terrible eyesight and memory, nothing to worry about. I’m too busy focusing on the pink trees anyway. 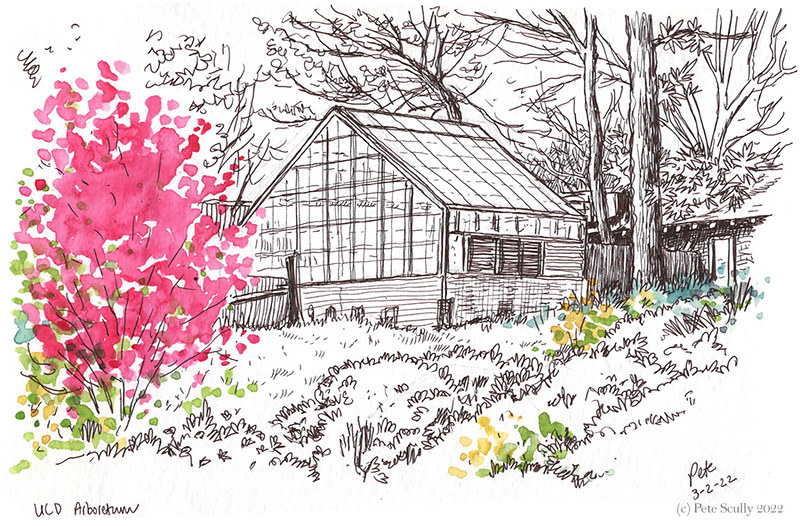