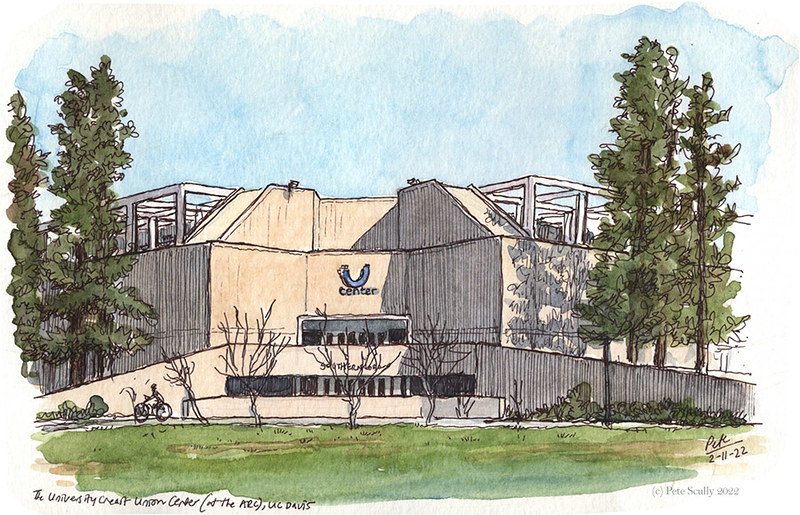 Every two weeks I get my Covid test at the ARC, on the UC Davis campus, which all employees have to do. It’s a bit of a long walk back to the office on those days when I don’t bring my bike (my back wheel is acting a bit odd these days and I need to fix it, I just haven’t gotten around to it). On this day I took the long walk past the old ARC Pavilion on LaRue, now the University Credit Union Center (UCUC, which sounds like someone emphatically making a point) (maybe it should be called the UCUCUCD). I was listening to an audiobook about the Beatles (“Tune In” by Mark Lewisohn, chapter one of a planned three part epic called “All These Years”, detailing their entire childhood and early adulthood right up to their last Hamburg trip at the end of 1962 – it was a 45 hour audiobook, which seemed like a lot for an audiobook until I remembered I’ve probably listened to over 100 hours of Beatles podcasts in the past couple of months since the Get Back inspired return to Fab Four obsessiveness. Honestly I’m like Murray the K. Anyway, I was listening to stories of young Ritchie Starkey playing Butlins with Rory Storm, I realized I’d never drawn this building before. It makes interesting shapes when the sun casts its shadows. It put me in mind of the Southbank Center and Royal Festival Hall (where Macca gave a talk about his book The Lyrics not too long ago), and that made me miss London, which is my default setting these days, missing London and obsessing about the Beatles. I used to like going down to the South Bank when I was in my teens, when I was doing A-Levels I would go to art exhibits there on the weekends, back before the South Bank was as busy as it is now, before the London Eye, before the Tate Modern, before the nicely paved walkways down to City Hall which also wasn’t there; I’d say ‘before the South Bank was cool’ but in the early 90s the South Bank was as cool as it was ever going to be, though I do love all the new things. I also had this thought, UCD standing for “UC in the sky with Davis” which I think would be a good name for a book, or maybe just a zine. Or maybe just a blog post, and not even this one, save it for a better one.

One thought on “you see UCUC, you see”