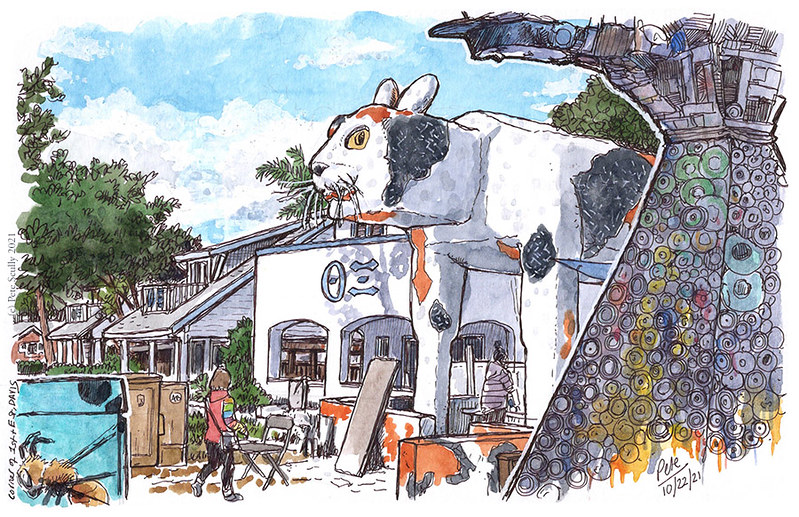 I popped downtown for lunch one Friday, and it was sunny, and people were out and about, and I decided to stand on the corner of 1st and E Streets and draw the outside if the John Natsoulas Center for the Arts, where they have the big cat over the doorway, and the big colourful dog made out of vinyl records. There was some sort of art event going on, people were coming and going in groups. I remember when they were building the big cat, as I was drawing a panorama of 1st St at the time, about five years ago or so. You’ve gotta love a big cat. It’s called the Cat Patio, by ‘The Mosaic Boys’ according to the Natsoulas website which calls it the ‘largest mosaic in northern California’. By a whisker, I suppose.

I’ve always been fascinated by the dog with all the vinyl records on it though. Young me would have probably been horrified at the waste of coloured vinyl which to me was the height of rarity, like picture discs or 12″ singles, until I discovered they aren’t that rare at all. I remember once actually going to Loppylugs Records in Edgware as a teenager getting into music and buying a red vinyl single from some band thinking wow, you don’t see many of these, if this band’s any good this will be a great addition to my Record Collection. Record Collection, hah. I gave up on an actual Record Collection at a young age. It seemed so important once didn’t it, to have a Record Collection, but in the end it turned out to be a bit pointless. I did enjoy going from second hand store to car boot sale looking for old original press Beatles records though, when I was 13, and I still have those along with the ones that my uncle Billy gave me. Those few important ones I got as a teenager, those were all I really needed. Anyway I got this one red vinyl single, by some duo with long hair whose name I can’t remember, and well, it was total pants. Utter pony. I was embarrassed even listening to it. I couldn’t even look at the photo of the duo on the back sleeve. The best thing to do with this red vinyl would have been to add it to another pile of shite coloured vinyl records and turn it into a massive sculpture of a dog that lights up at night, and evidently that’s what’s happened here. I have no doubt that the records on that dog were just as unlistenable as that one I got, so bad the only thing you can do is turn them into art. I really like the big colourful dog, even though you can only see a bit of it.