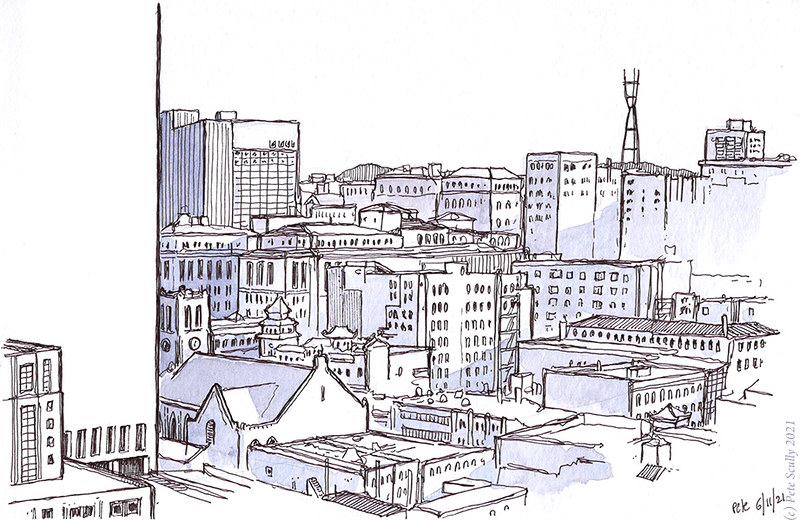 So, I went down to San Francisco for the first time in nearly two years for an overnighter. It was a beautiful early evening as my Amtrak bus crossed the Bay Bridge; I had come down on the train after work on a Friday and it was still light enough when I got there to get to the hotel, and get out for some sketching before dinner. My hotel was tall – I was on the 23rd floor, so I had an amazing view over the city. I couldn’t resist drawing some of that view from my hotel room window, while I didn’t colour it in or finish all the details it was great to sit at a desk and look over this view, even with my increasingly poor eyesight. Sutro Tower poked out above the fog-free sky, and the evening light was soft. But I wanted to get outside and wander, to see what was different about the city in my two year absence. 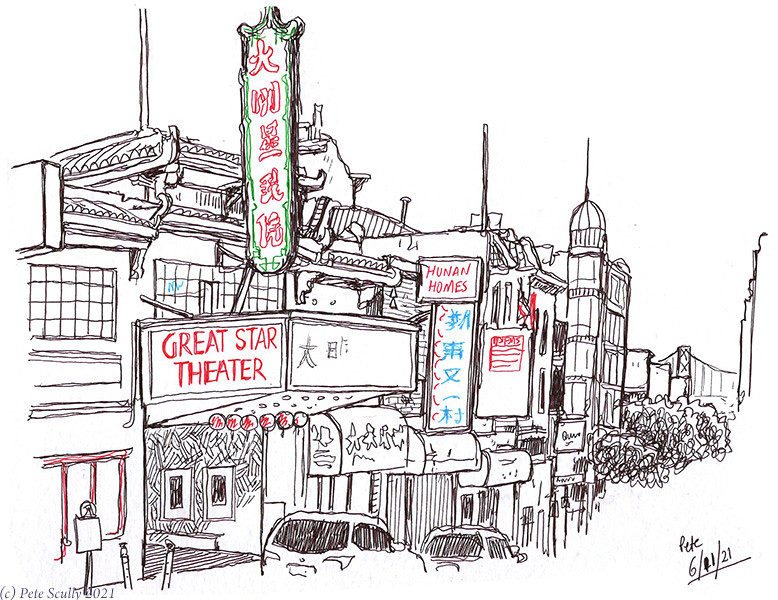 First of all, the restaurants and bars all have outdoor seating on specially built wooden platforms that come out into the street. It makes a lot of the areas around North Beach feel quite crowded, and more claustrophobic than before. I was right by Chinatown, and many of the restaurants there had the same thing, and were fairly busy. A few places were closed; the Comstock Saloon (which I drew two years ago, while enjoying a delicious cocktail). still had boards over the windows, with signs dated March 2020 saying they were closing for a bit. With so many other places still operating (such as Mr Bing’s across the street, which was positively bursting with merry drinkers on its wooden platforms) it was a shame to see the Comstock closed. I sketched in the street in Chinatown stood in the gap between two covered outside seating areas, the Great Star Theatre, but didn’t bother adding colour. 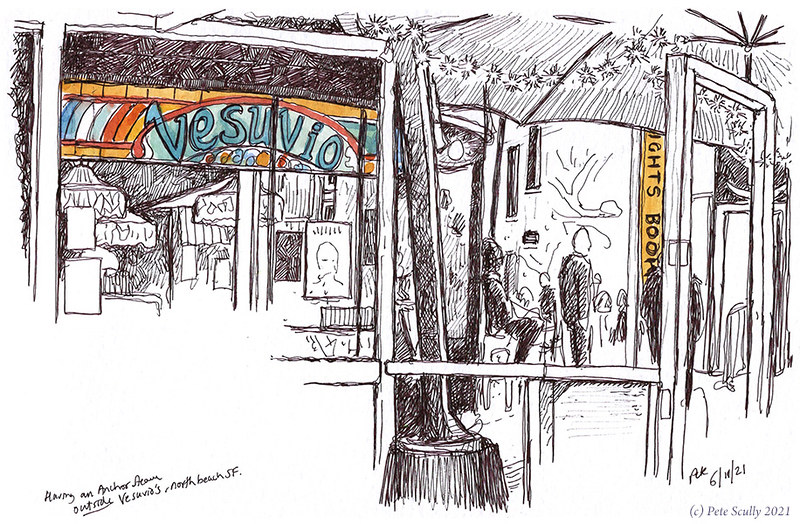 Everywhere in North Beach was quite crowded, so I found a less busy restaurant down the quieter end of Columbus, and had some gnocchi. I grabbed a cannoli at Mara’s for dessert, before stopping at Vesuvio’s for an Anchor steam before bed. I sat in the small outdoors platform, with the traffic of Columbus zooming by, and drew the above. There were many people sat at tables in the well-lit Jack Kerouac alley in between City Lights and Vesuvio, you had to be directed to your seat by the Vesuvio door man and service was table-only, but you could go in to sue the toilet. In fact there was limited seating indoors too but very limited, and all taken. As things open up a bit more, things will start getting back to some kind of normal, I am just glad to see that Vesuvio, and my favourite place across he street, Spec’s, is still operating in These Unusual Times. I finished up by beer and my sketch and went to bed; my hotel was only five minutes’ walk away. 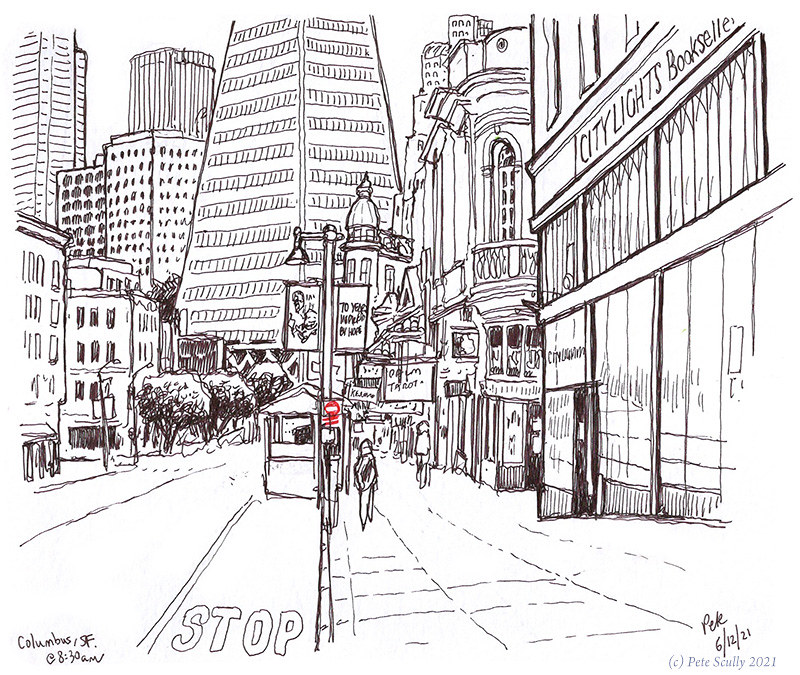 So when I woke up in the morning, I popped down to the donut place on the corner of Kearny and Columbus, and did an early sketch of that very scene looking down past Vesuvio, toward the TransAmerica Pyramid. I have of course drawn this view a few times before. It was 8:30am but already warm, for the city. I drew what I could and then headed back to the hotel to watch the Denmark-Finland game, which turned out to be the one in which Christian Eriksen collapsed.  I went out after the game was abandoned (temporarily as it turned out) and sketched for the rest of the day. I’ll post those another time. It was good to finally be back in the city, I’ve missed it, but it’s not yet the same. I suppose in this city, it’s never the same.