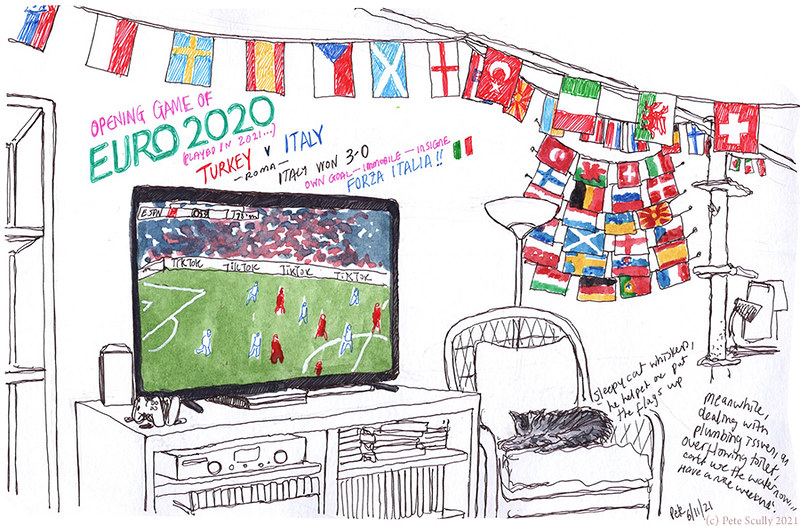 “Who’s going to win the Euros?” you ask. I don’t care. Despite all of this, despite the elaborate chart I have made, despite my collection of shirts, despite that massive long autobiographical post I made with digital illustrations of players past, despite getting up at 6am to watch Scotland lose to the Czechs, despite all the flag banners I have put up and the paper mosaic flags I have painstakingly made (they go back several tournaments), despite hunting in vain for this year’s Euro 2020 Panini album here in California and then finally just spending money ordering it online just to have it with all the others, despite all of this I don’t actually care who wins the bloody thing. I don’t care who wins the groups, I don’t even really care who wins the games themselves, although obviously I want England to win theirs (yet I will wear the Scotland shirt this Friday when they both play, my son will wear the England shirt), and it would be nice if England actually won the tournament, there’s been too many years of hurt. Perhaps instead of “Jules Rimet still gleaming” someone could sing about the “Henri Delauney”, to the tune of Roy Orbison’s “Only the Lonely”. But no, I don’t actually care. Several reasons, firstly I am exhausted from football. It’s been a long couple of years. Imagine how the players feel. Secondly, Spurs aren’t in it, so I always feel differently about international football. Thirdly, watching Christian Eriksen nearly die on the pitch live on TV on Saturday morning scared and horrified me a bit. I was actually in a hotel in San Francisco at the time, and just couldn’t believe it. I can’t really comprehend all the feelings I have about that incident, all I can say now is that I am so glad he lived and is, as much as we know, ok. Alive. I was going to draw him in Illustrator tonight but I’m still upset thinking about him on that pitch, surrounded by his team-mates, trying to bring him back. I have a soft spot for Denmark having spent a formative summer there at the end of my teens, but I love Eriksen. He spent a long time at Spurs, he could have left long before but didn’t, when he finally decided he needed a new challenge he went to Italy and won the Serie A title with Inter, and bloody good for him. He was long part of my favourite ever Spurs team (maybe equal to the Ossie/Hoddle/Waddle/Allen etc team) and he’s still on my son’s wall; that Tottenham team forms part of the bond I have with my son, so I have a lot of affection for Eriksen. That’s all I can say on that. It wouldn’t be fair to say it’s made me not care about the Euros, on the contrary it’s probably made me appreciate all the players who take part in it more, they are human beings doing what they love so we can watch them. I think I don’t care who will win because I just want it to be all good and worth it. It doesn’t really matter who wins. Though of course, tell me that when England are in a penalty shootout in the quarter finals and I am in the kitchen eating a packet of Pringles too nervous to watch. As I write all the teams have played once; I drew this during the first match, Italy vs Turkey. You’ll see from the note that we had a plumbing incident, that would be the toilet spewing out sewage, which I was hoping wasn’t a metaphor for international football. However it was a really good start from Italy, and despite my reservations about this multi-country tournament I absolutely love that many teams are playing in front of home crowds. After this bloody year, it feels really fantastic, especially watching Italy in Rome with Andrea Bocelli banging out ‘Nessun Dorma’ (though of course Pavarotti was better; I said to my wife that it was a bit like having Ringo sing ‘Imagine’). The best bit was the little remote control car that drove out onto the field with the match ball on top of it. Star of the show. “Is that a Volkswagen?” someone asked; I said “I think it’s a Nissan Dorma”. Sorry, it’s late and I just needed to get that joke out of the way. Italy looked good, they could be Dark Horses. There are lots of Dark Horses in this tournament aren’t there. Why do we say Dark Horses? I mean, horse racing usually takes place in the daytime and a Dark Horse would be easier to see. Maybe we should say Green Horses, they blend in with the grass. Or Invisible Horses. Anyway it’s been a good tournament so far, some great names, there’s this one guy called Varcheck everyone’s talking about (or it may be his wife, Varcheckova). I know, just getting those ones out of the way. I was pleased to see Sweden have a player called Danielson, it reminded me of the Karate Kid. This will be a long tournament, honestly. I don’t care who wins.