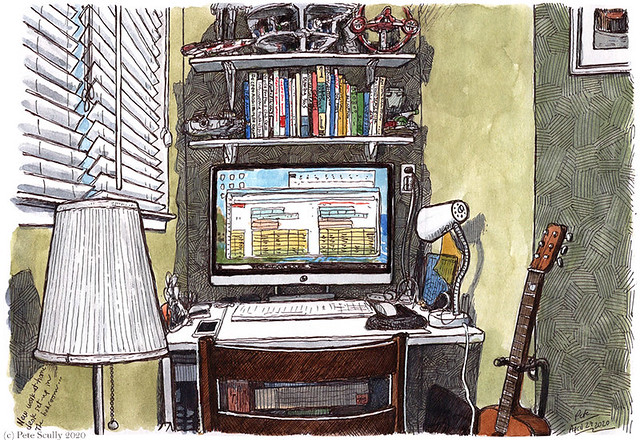 If the flood has done one thing, it has cut my commute time down by quite a few seconds, now that I don’t have to go downstairs but just roll out of bed to the desk next to my bed. I’ll still be late, but I do work at all hours these days and nights, what even is time. This was the desk where I did my Lego animations (I have a number of lamps, there’s one on the desk with a yellow gel filter hanging from it); despite all this time at home these past two months I haven’t done a single bit of animation. I am still drawing that sketched virtual tour of Britain, I have just reached Sunderland so I’m getting close to the end. I’ll scan it all in one go. I drew this before I moved the bookshelf and a bunch of other downstairs stuff up to my bedroom, so I’m feeling a lot more cramped in here now. But it’s working for me ok. I have my books close to me, although I should find a way of putting them behind me like all the cool people do in their Zoom calls. Actually I have been rotating virtual backgrounds for Zoom, although sometimes half my body disappears when I move, making me a floating head, like Holly from Red Dwarf. I usually have a sketch of my room as a virtual background. 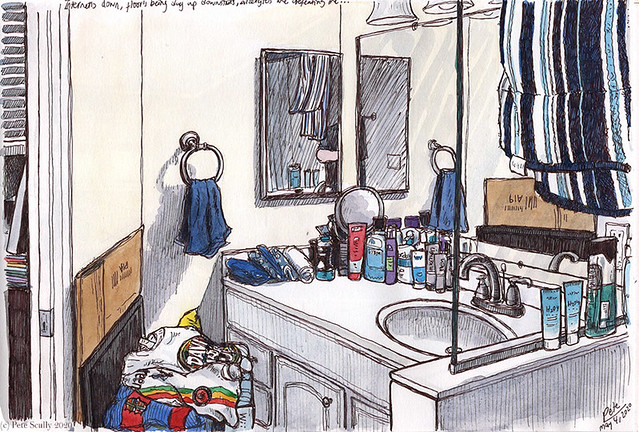 So, I’m living in a small corner of the upstairs for now. I get out for a run every day or so, but then it’s back up here to work or draw or read or eat. The internet went down one day, very disruptive for those working from home, or doing anything from home. So I drew my bathroom. Spot footy shirts in laundry basket. I did manage to cut my own hair ok, I did a good job. And then below, this sketch was from a month ago, before the flood, another one playing with the mad pencils on grey paper, this time late at night watching the Formula 1 show on Netflix. That’s Ricciardo there, it was announced this week he will join MacLaren for 2021. If racing or sport ever comes back. Of course the Bundesliga returned this weekend, in front of empty grounds, and I got in a few jokes, “Glad to be Bach” (in the Frankfurt-Mönchengladbach game), “All Quiet on the Westphalian Front” (in the Dortmund game) and I slipped in a “Don’t München the VAR” when Bayern had a goal disallowed today. As far as silly puns this is as good as it gets in these difficult times, these strange unprecedented times, these very confusing times; they may be no “I pity the foal” but I’ll take what I can get. 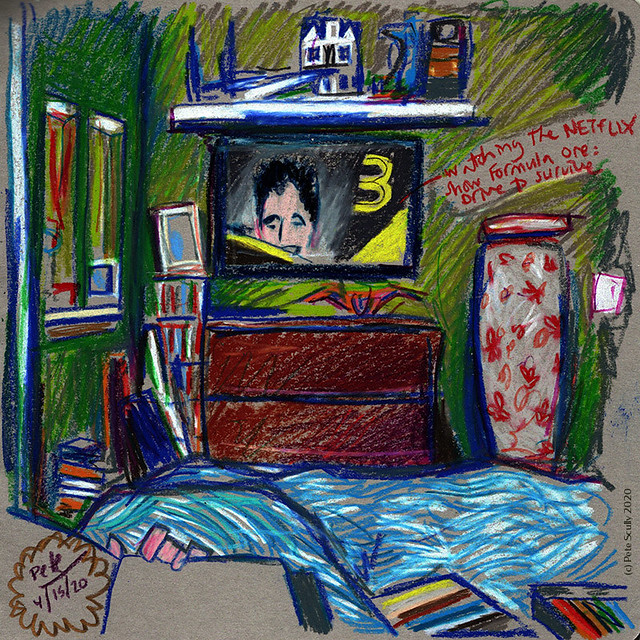 One thought on “time upstairs”