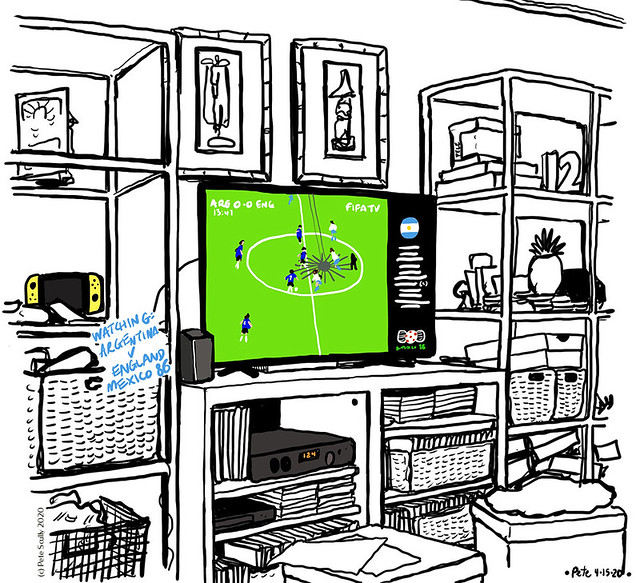 Here’s an iPad sketch from a few days ago. Sorry, a couple of weeks ago. Where the hell did April go? March was about eight years long, April was about eight minutes long. I have been watching a lot of old sports. Well mostly football and formula one. Ok, only those sports. Here is the classic 1986 World Cup quarter final game, you might have heard of this, Argentina v England. I was ten when I last watched this game. We’ve all seen two clips of this game a million times, the Hand of God, Maradona’s famous handballed goal, and his subsequent brilliant mazy dribble. I was ten when I saw this game. Maradona was the best player in the world. While family members and friends all swore loudly and often, I knew this was a special player. We all did. Mexico 86 holds a lot of great memories, the first World Cup I really followed. I still have my Panini sticker album, defaced with felt tip pen by me and my neighbour, unfinished but still enough memorable characters such as Antal Roth, Randy Ragan, Cha Bum Kun, Yannick StopyRAAAAAA. Giuseppe Bergomi’s massive monobrow. But back to this game, we were at a friend of the family’s house, I was playing with the other kids, coming in and out to watch the screen with the sweary drinky people. International games in those days were so glamourous, far away, bright un-English sunshine, ridiculous big stadia nothing like the crammed in barns we saw on The Big Match, the commentary echoing of far away phonelines. This was the greatest game of all time wasn’t it, England were robbed weren’t they, if they had managed to not get cheated out of this game they would surely have just won the World Cup easily right, their first in twenty long years of hurt, right? Watching it again, I am reminded of how boring some of these games can be, especially back in the old days of the 80s. It was nice seeing Peter Reid again, always liked him, maybe a bit less seeing Steve Hodge, never a big fan. And England really weren’t all that, Argentina were always winning this game, all the momentum was with them. Who know, perhaps if the game had not swung their way, England may have nicked it, but the Hand of God shook the cradle, Shilton failed to outjump the famously not tall Maradona, Diego punches it into the net and I remember vividly that sweary drinky room of family and friends all jumping up as one shouting “HANDBALL!” and other jingoistic phrases, and I remember thinking at the time, ten years old in 1986, “you know if only we had VAR, we would have nothing to talk about over and over again for the next thirty-something years”. My favourite bit about rewatching it was that FIFA added different commentary than the one I remember, and the commentator is clearly speaking years later but pretending like he doesn’t know what happens, as if adding some doubt about the handball. He actually says, while pretending to be actually at the Azteca in 1986, “well here we are in the hot and sweaty Azteca stadium in Mexico City and Diego Maradona has just scored a goal with what might be his hand! Or his head. It might have been either. He is celebrating so it must be his head. If it was his hand England will be aggrieved about that for years until they win the World Cup which might not happen ever now. I’m sure he’ll make up for it later in this game with a much better goal to prove that he really is the best player in the world, in case we think it’s Platini who might make a good UEFA president someday with his honesty. Well it looks like the famous Hand of God goal will stand, so that’s another goal for Maradona and wait til you see him in the semi final against Belgium.” Other than that it was faultless commentary. Even describing the second goal as the Best Goal of The Previous Century didn’t give it away. I have a pair of socks with little images of that Hand of God goal all over it, if we had VAR I might not have those socks. the best bit about that game though was not the Hand of God, nor the Amazing Best Goal Ever, nor even Gary Lineker Pulling One Back, but the shadow of that big windmill spider thing that was cast across the pitch. It was such a memorable feature of that World Cup that it was almost like another character in the film. 1986. You’re only ten once, you can never be ten again. When I was ten I watched football all the time, drew constantly, had Lego all over the place and regularly freaked out about the daily world news. You can never be ten again.

3 thoughts on “talk to the hand”