Ok…this one goes back a while. Back to March, in fact. In my defense, I only got the sketchbook back recently, so I could not write a post about it at the time. Well I could have, but stories without pictures? I was invited by Prof David Del La Peña of UC Davis to take part in a special sketchcrawl, which was to be part of the annual conference of CELA (the Council of Educators in Landscape Architecture) in Sacramento. The sketchcrawl would move from midtown Sac and end up in Davis, linking up by train between the two. I joined them after lunch in Sacramento, and we were given accordion Moleskines to draw a series of fast sketches in, on location, at various spots about downtown. Also in attendance was Chip Sullivan, who I was not familiar with but he is very well known as a sketcher and educator and knows James Richards well. So I started off by drawing him and David near the conference center in midtown. 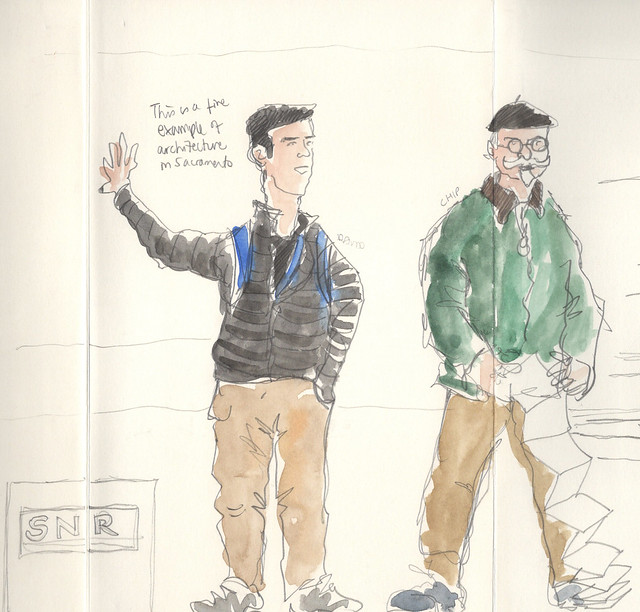 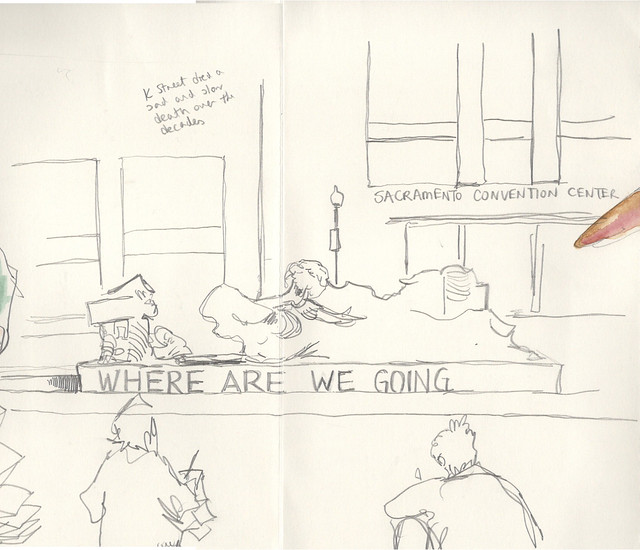 “Where Are We Going” it said on the sculpture near K Street. Well it turns out we were going down to the Cathedral, and I sat behind the large open angel wings of a statue. I remember drawing this Cathedral (Our Lady of the Blessed Sacrament) years ago, 2006 or 2007, back when Pyramid Brewing was right behind, and California was so new to me. I remember trying to draw the Crest back then as well, the classic movie theatre a little way down the street. As we stopped for a moment to mention something about sketching I drew the sign, taking just a few minutes, before we moved on. 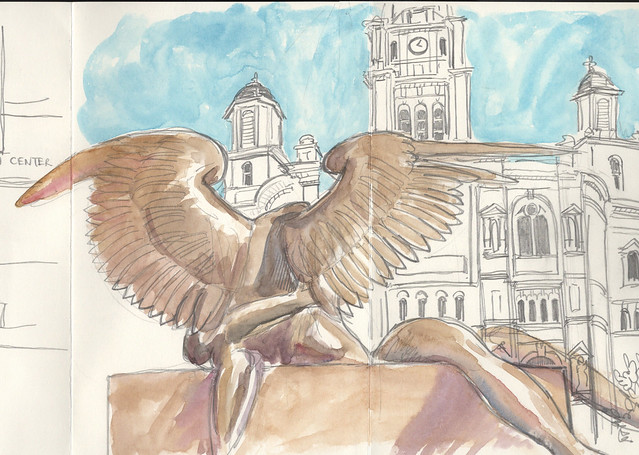 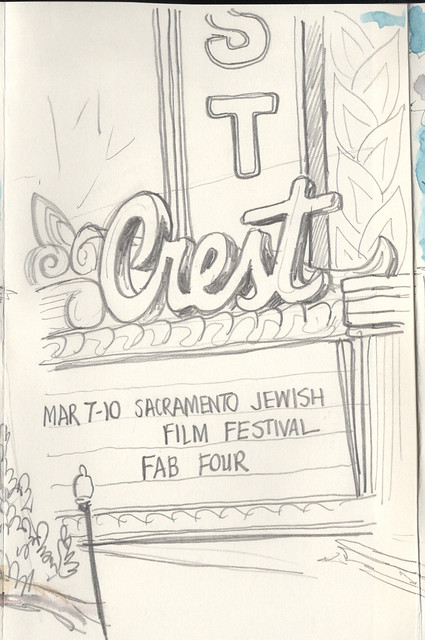 And then we moved to the newest part of downtown, the area around the Golden One Center, the massive basketball arena. We saw Paul McCartney there a couple of years ago, an amazing show, one of the first performances held at the stadium. Macca sang for three hours and was incredible. I remember when this was part of the downtown mall, I would come here occasionally, but it is long gone now. You’ll notice I decided to deraw in pencil that day. I find that in those accordion moleskines I find drawing in my usual pen to be frustratingly difficult. The paper, the size of the page, the fact that it’s flopping all over the place, plus the extremely limited time in each spot – so I just went with pencil, which moves so fast across the page, and splashed on watercolour when I could. It was a sunny day with great clouds.interesting shadows, but cool enough for scarves. My favourite weather. We walked from there over to the Crocker Art Museum, not with much time to do a larger sketch (such a tight schedule, and distances to cover!) but enough time to pop into the gift shop. Oh but I did get a sketch, of another sketcher in a red coat. And then we went to old downtown… 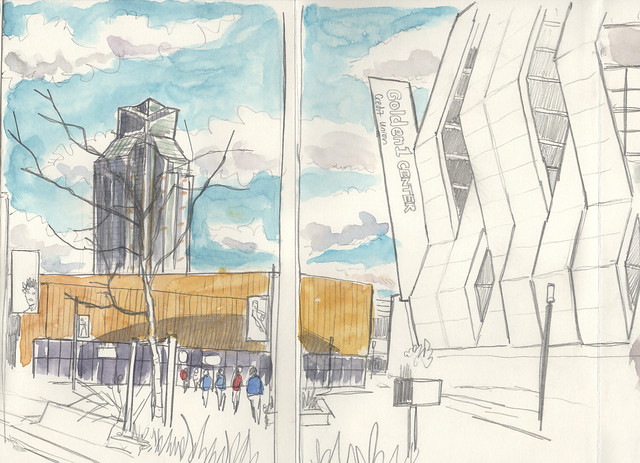 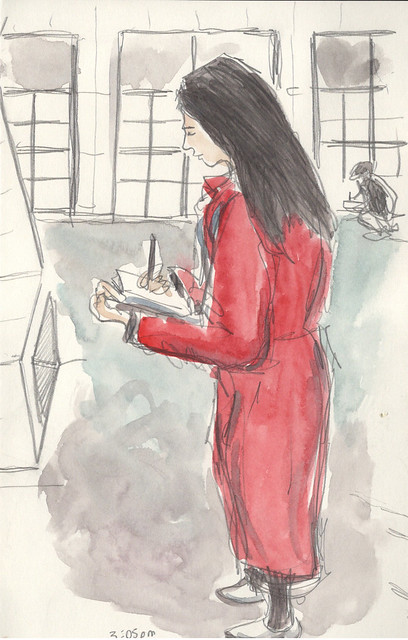 Old Downtown has lots to sketch, I really should go sketchign there more often. This time I decided to draw some of the fire hydrants, one with a yellow cap, one with a green cap. This was followed by fast sketch of the Pony Express statue, before we walked to the Amtrak station. 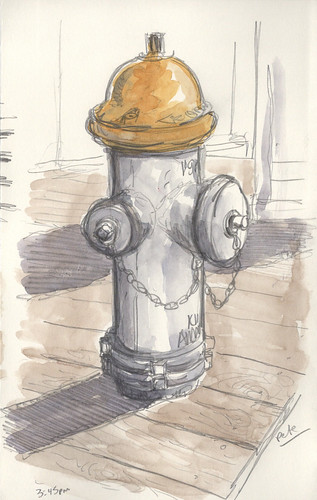 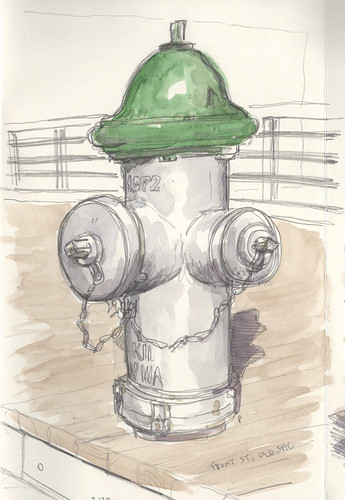 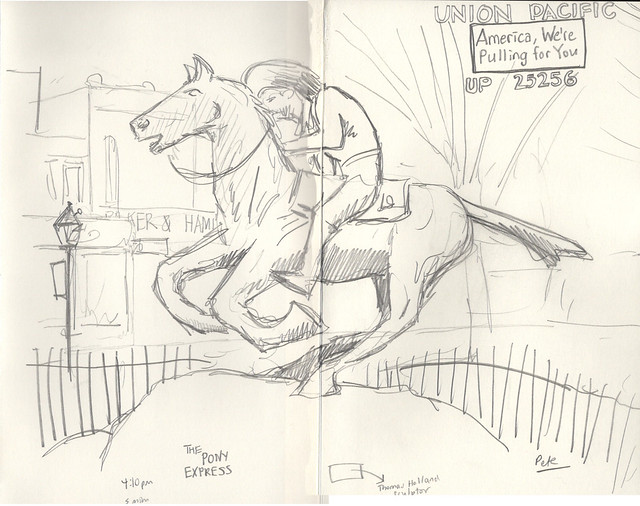 I sat with a couple of the people attending the conference, Penelope and Tatyana (I think one came from Texas, another from California, but this was in March and my memory has faded). It doesn’t take long to get from Sac to Davis, but there was a table and a defined amount of time to sketch. You can see from the window that the Causeway was still full of water, after all the rain we got last spring. I have sketched the inside of Amtrak trains a few times before. 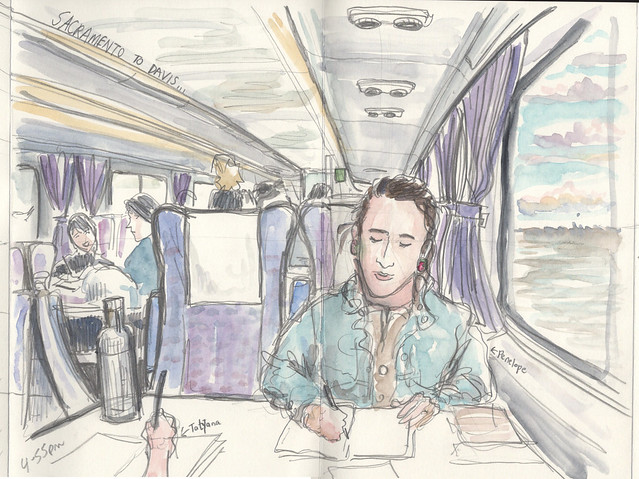 And then we got to Davis, with just enough time to draw that iconic and sketchable Davis building, the Varsity Theatre on 2nd Street. And then we relinquished our sketchbooks, and walked back to the UCD campus. 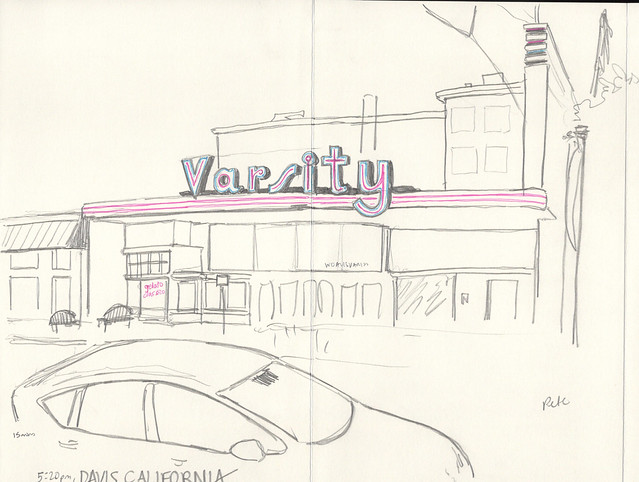 The books were shown at an evening event during the conference, I was unable to go to it, but it would have been fun to see how everyone else interpreted the afternoon. Everyone sketches at different speeds and with different amounts of detail; I consider myself a fairly quick sketcher but it was hard to keep up! My feet were pretty tired afterwards, and I needed a good rest that weekend.