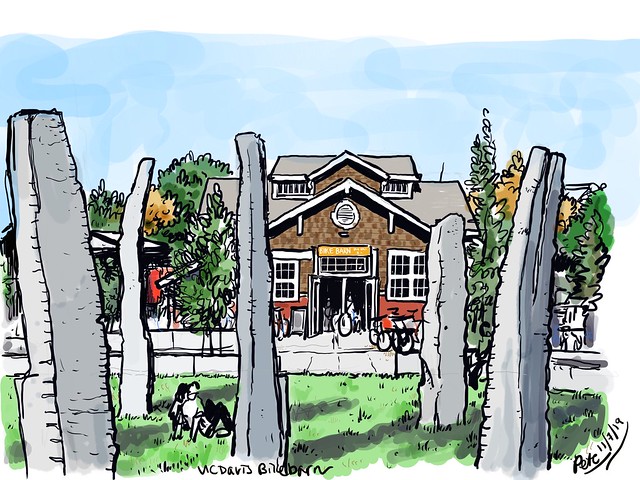 Ok, let’s start this thing again. It’s been a long time since I posted my sketches properly, and it’s about time I caught up. I historically post sketches chronologically, never alphabetically, often autobiographically. However since my last posted sketches were from our trip to Disneyland in JUNE – over six months ago! – we’ve actually been to another Disneyland since then! – in fact my wife has been to Disneyland itself at least once since then – then perhaps I should just post the second half of my 2019 sketches in a nonlinear fashion. Like Pulp Fiction, or the middle episodes of every Netflix series. So let’s start off with something familiar. This is the Bike Barn at UC Davis, I have drawn it a million times, and this time it has those standing stones in the foreground. I drew it on a bright November lunchtime, with the sun in my eyes, glaring off of the screen. The screen? Yes, this was not drawn in the Seawhite of Brighton, or the Stillman and Birn, but on my new iPad, using Procreate. I have joined the Procreate drawing club, and I love it. I finally got a new iPad Air after years of using a 2014 iPad Mini. I was going to get the Pro, but the new Air is just as good and was half the weight. I made up for that by getting an expensive Moleskine cover for the iPad, so it looks like a sketchbook at least. Anyway I got the Apple Pencil and I love it, wow, it’s totally fun. I really like the other sketchers who use Procreate and digital devices (such as Rob Sketcherman, Paul Heaston and the brilliant Uma Kelkar who actually has a book about sketching with a tablet coming out next month, part of the Urban Sketchers Handbook, I’m looking forward to reading that). I especially like that you can watch back a video of how the sketch came together. Very useful for demonstrations. Still, I’m trying to get the hang of it, see what I like. I like using layers, that is very handy. The colouring part of it is very different to what I’m used to with real paint, so that’s something I am experimenting with. This sketch and the one below, the Crocker Nuclear Lab drawn quickly from my office window, were two of my first attempts at Procreate. I’ve got a lot I am figuring out and I am already getting used to some of the different brushes, but I can already see I am going to use it a lot more. In fact I drew this year’s advent calendar with it, mostly while sat on a plane back from England (I went to England in November). 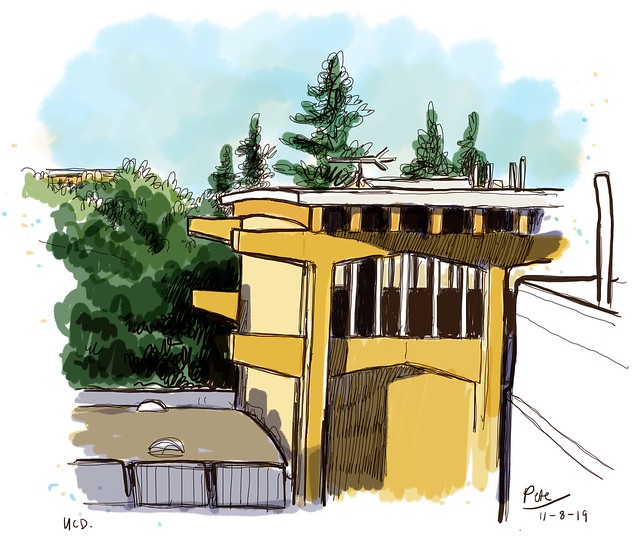 It’s been a while since I posted, so you’re probably wondering how UC Davis is doing. UC Davis is doing fine, it’s been getting some new buildings, and renovations, and I’ve been drawing those. Walker Hall is still being refurbished, it’s nearly done. I’ve been drawing that too. I even sketched it on the iPad last week. One of the best things about the iPad, one of the absolute greatest things, I don;t have to scan the drawing afterwards. It’s right there digitized already. I do have a new scanner, faster and quieter, but I’m still getting the hang of the lighting settings on it, there are always shadows near the crease of the book that I have to edit out afterwards, as best as I can. None of that with iPad sketching. Having just scanned half a year’s worth of sketches this past week, that is a big bonus.

One thought on “procreating”