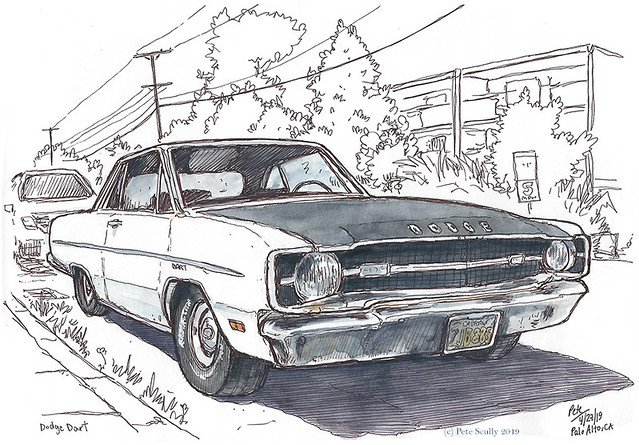 We went down to Palo Alto, in the heart of Silicon Valley, for a soccer tournament (my son’s team the Davis Dawgs got first place after a thrilling and tight final). It was held at Greer Park, just off the freeway, and I had time between games to get some walking in, and some sketching too. This old car was parked near ours, a Dodge Dart, looking very much like it just skidded in from a 1970s cop show, knocking over a pile of boxes, shouting ‘guv!’ and sliding over the bonnet pointing a shooter at some crooks in a Ford Cortina. Even the headlights and the grille seem to be scowling at the DI who is reprimanding them for kicking in the door of a well-known Tory MP accused of taking backhanders from back-door bad guys, before slamming his badge down on the table, shouting ‘guv’ and heading down to the smoky boozer to growl at the barman, where he overhears a tip from a grass and a lightbulb goes off, and the next scene there is a door being kicked in and a scrawny looking crook caught wide-eyed in the headlights, before hauling him into the DI’s office and slinging him across the desk, earning a raised eyebrow, a shouty word, and his badge back, thanks guv. It totally looks like that, doesn’t it! 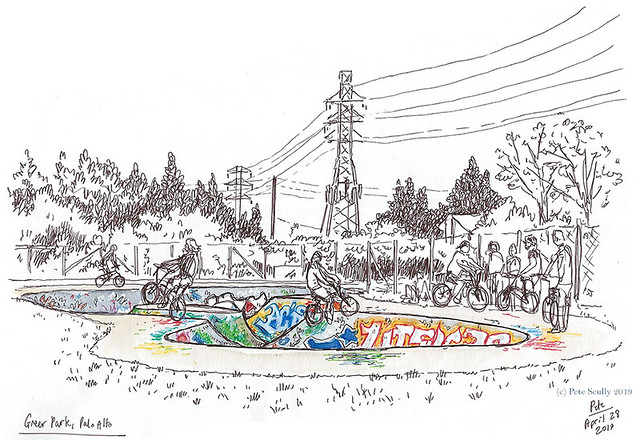 On my walk around the park (getting my steps in, guv), I saw this skate park, in which the valleys were filled with colourful graffiti. When I went back to sketch, after our fourth game, there were a group of men in their 20s and 30s with bikes having a day out, barbecuing stuff and taking turns going into the valleys and doing big spinning jumps. I also sketched a fire hydrant. After our team won the final, everyone got an ice cream. I got one too, a massive chocolatey nutty thing, and that was my dinner, diet be damned, guv. 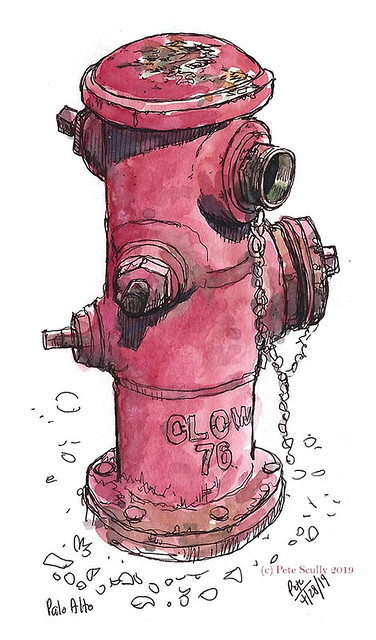