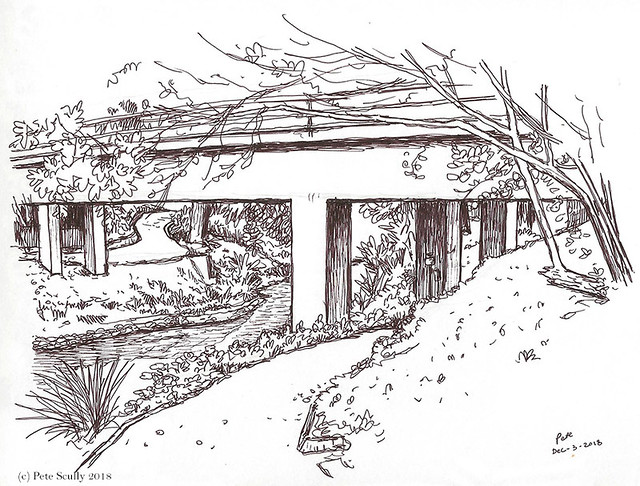 Another from the last month of 2018, this sketch was down at the Arboretum on the UC Davis campus. It was more colourful than this looks; there was a lot of yellow leafage strewn along the rising bank to the left there, and a greenish hue to the water (though since the creek has been thoroughly redeveloped, there is no longer a pea-soup thick covering of algae).

By the way, I was interviewed by Anjini Venugopal for the California Aggie (UC Davis’s long-running student-managed newspaper), and the article appeared this week: https://theaggie.org/2019/01/11/the-artist-pete-scully-discusses-urban-sketching. Check it out! “I’m just obsessed with drawing,” Scully said. “It’s something I have to do.” I totally said that.

Right now I am (in addition to sketching) actually doing lots of logo design, both for our Select soccer team (the “Dawgs”) and also the Davis World Cup, so I have been drawing lots of ideas, and teaching myself how to use Illustrator, which I have just nor bothered with for years (I typically use Photoshop when doing anything digital).  At some point I might share that stuff, but for now, I’m just teaching myself and messing about. And it has been immense fun! 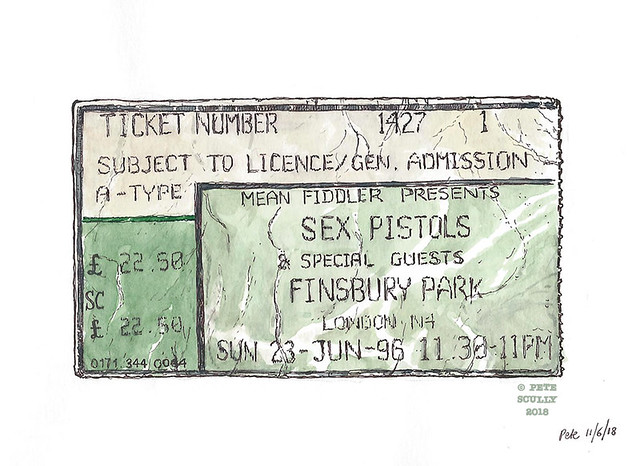 As I do every year, here is a list of all my sketches from 2018. It was a less sketch-ful year than 2017, and than 2016 too, but still it’s a decent haul. I’m not showing  huge pile of twelve sketchbooks from fifteen countries or anything; I’m a quick sketcher who draws a lot, but I love lots of detail . Sure, it’s been a very busy year, working lots in my full-time job, and coaching soccer for much of the year, but I always find some time to sketch (though so far, 2019 equals zero actual sketching…). The busiest month by far was July, when I was in England, Spain and of course Portugal. Sixteen fire hydrants, not bad. Some Lego, not as much as last year (but I’ve been animating quite a lot of it!). I’ve done other drawing, some design stuff, creating logos. I’ve also started teaching myself Adobe Illustrator the past couple of weeks which has been fun. Anyway, as a pound-for-pound comparison with the most recent years, here is the new chart…

In 2019, I am planning to go to the Amsterdam symposium in the Netherlands, and also sketch around the country of Belgium right before that. I don’t know if I have any new-year sketching resolutions, perhaps to draw more nature, I’m so inspired by Richard Bell’s book ‘Britain’, I would love to explore more. Anyway, happy sketching in 2019!