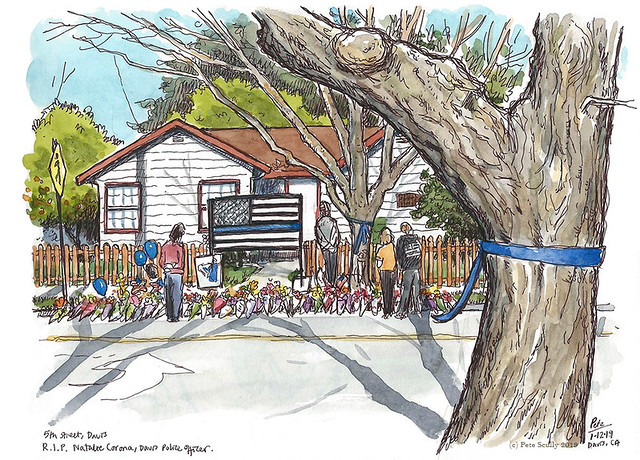 Last Thursday evening, at around dinner-time, a three-car traffic collision on the busy Fifth Street in Davis was attended to by Police Officer Natalie Corona. It was an unusually foggy evening. I had gone back home not too long before then, we ate dinner, watched TV, and then received calls and texts on our phones that came from the Davis PD, telling us to stay inside and shelter in place until further notice, that the police are searching for an active gunman in downtown Davis. Living in America, these are the alerts you fear most. We learned that a police officer had been shot and that the shooter had fled. Police Officer Corona was taken to hospital in Sacramento, where she passed away. She was only 22, and had been a full police officer for only a few weeks. Watching the Davis Police Chief Darren Pytel give a press conference that night when so little was still known was difficult, it was clear he and the whole of Davis PD were in a state of shock. A massive police presence in downtown Davis scoured the area, eventually surrounding a house about a block from the crime scene. Reports were that the shooter was inside. Eventually at around 1am it was reported that the gunman had shot himself, confirmed by more automated phone calls and texts at around 2am. It was a shocking evening in Davis, one that it is hard for me to stop thinking about. I pass that way most days, I know a lot of people who were around that area, this is a small city. The next day I walked up to the area around Fifth and C, but it was all still closed off by police. The name of the shooter was not released until Saturday, one Kevin Limbaugh, 48. It transpired that Limbaugh was not related to the traffic collision, but had cycled up to officer Corona and shot her multiple times, then discharged his weapon around him, hitting the boot of a firefighter, a student’s backpack, and the back of a bus; it’s a miracle nobody else was hurt or killed. Then he circled back and went home to a house he shared on Fifth and E. The details of the evening, what is known of it, has been reported in the Davis Enterprise, whose reporters provided excellent coverage throughout, especially Lauren Keene posting on Twitter.

At the spot where officer Corona was shot, tributes from all over have been left, by police officers and members of the public, thanking her for her service, shocked at this terrible loss. Blue ribbons have been put up around trees for many blocks around, and a candlelit vigil attended by hundreds took place in Central Park. A memorial service for officer Corona is being held this Friday. Our community in Davis has been shocked by this horrible crime, but it’s at difficult times like these when community is most important; I’m glad that we have one.