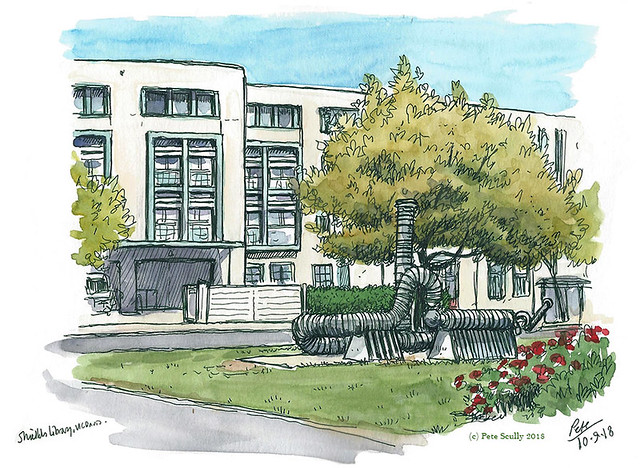 This is another scene from UC Davis, showing the side of the huge Shields Library, with the metallic sculpture called “Bum Bum, You’ve Been Here Before”, which is by the artist  Tio Gianbruni. I don’t think it’s ever appeared in any of my campus sketches before. There’s a lot of public art on campus, many sculptures. We’re a campus with a rich history of sculpture. ‘Bum Bum’ is found near the Arts Annex. I drew this in dark green pen. I like the dark green. Those red flowers make it feel like Spring, but it’s very much Fall. Mornings are getting cooler, though daytimes are still very much sunny and in the 80s. Shields Library is named after Peter J Shields, son of an Irish emigrant and Gold Rush rancher, who was one of the founders of UC Davis. When I first moved to Davis, before I was working at the university, I would come to the library and read medieval language books, riding on the back of my recent studies in the subject, though I never carried on. Shields is massive. Lots of places to read in peace. I miss spending hours on end in university libraries, doing research as best I could. My undergrad was spent in the large library at Queen Mary in London, which was always busy but had a great video library section (I did a course in German film). My Masters was spent mostly in the quiet corners of the Maughan Library on Chancery Lane, one of the main libraries for King’s College London, and I spent many hours every day there (though my best friend worked on the same street and there was a pub right across the road). I also spent a great deal of time in the medieval literature corners of the huge Senate House library, the central library of the University of London, near Russell Square. That really became a home from home while writing my MA dissertation (about the antagonism between English and French in the middle ages). In addition to Middle English and Old French I studied a fair bit of Old English (particularly the alliterative poetry, much of which I’ve forgotten now), Old Gothic (Wulfila and his bible), Old Saxon (the Heliand), and Old High German (Althochdeutsch; I did read the actual Abrogans, the oldest thing in German, at the beautiful Stiftsbibliothek library at the Abbey of St.Gallen in Switzerland) (I love telling people that) (makes me sound clever). Now, I draw pictures, and remember library time and dictionaries of languages I never learnt properly.

One thought on “bum bum”