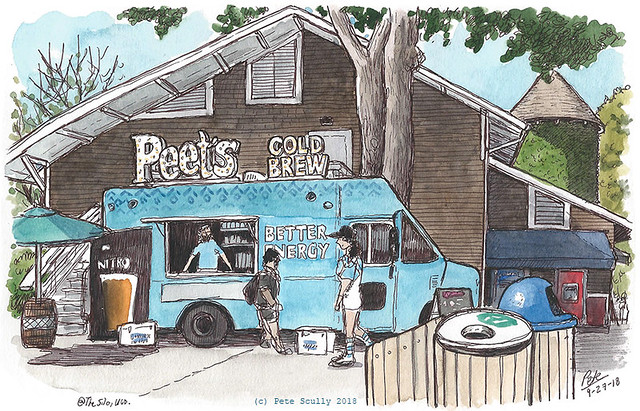 The start of the Academic Year at UC Davis always brings busy times. I like it; after the long hot summer it’s nice to have all the people back. A lot of people, a lot of new cyclists, a lot of young drivers. People dress well in those first couple of weeks, dressed to impress new classmates. All the sorority houses along Russell that I cycle past are bursting with outfits and hairstyles. I haven’t been downtown much lately but this is also when people go out to restaurants and bars in huge groups; they’ve all just met each other and don’t know who will be their best buds yet. This is what I’ve seen over the years in this college town. By about November the cycling crashes will slow down, the homework sets in, the leaves become crispier. On this day though in the first week of classes I sat in the shade by the food trucks at the Silo and sketched this temporarily located Peet’s Coffee truck which was busy offering people a free cup. I don’t drink coffee, and I also spell ‘Pete’ properly (this must be another American spelling like ‘color’ and ‘aluminum’). It was nice though to see something new at the Silo, something different to sketch. ‘Cold Brew’, I suppose this is some sort of cold coffee? I don’t know. That large ‘Nitro’ looks like a beer. In fact not knowing that this was Coffee I might assume this was a beer truck, if such a thing were allowed on campus. Brings me back to British universities, those first weeks of the academic year there, now they had a lot of beer on campus. In many UK unis the campus is built around the pub. The student union bar at my old uni, Queen Mary, was the Draper’s, and I remember back to 1997, that place would get messy. None would get so drunk as the rugby team though, going there on a Wednesday night you’d see the players there, large heavy-shouldered public-school types (America: ‘public’ school in England means ‘private’ school, yeah our language makes no sense occasionally), vomiting into buckets while stood on the table and then carrying on drinking. ‘Fresher’s Week’ is what we call the first week of the university year, ‘Freshers’ being like ‘Freshmen’ in the US (just less gender-specific).  God I’m glad I’m not back in those days.

3 thoughts on “get fresh on the weekday”