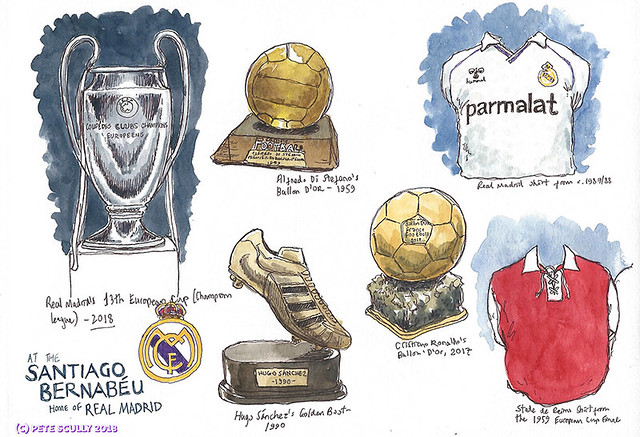 On our first full day in Madrid, the first thing we did was go to the Estadio Santiago Bernabeu, home of Real Madrid. On my previous trip to Spain I went to the Camp Nou in Barcelona, and did the tour of the stadium, with their impressive trophy room. I really wanted to see the trophies of Real Madrid, who have won the European Cup / Champions League an unbelievable 13 times, and so that’s where we went. My son is a huge football nut as well and actually has a Real Madrid shirt – we’re not Real fans, he got it because he likes Modric and Bale, and in Spain I prefer Barcelona historically (though I don’t really care, my only beloved club is Tottenham), but it was something special to see this amazing place. Cristiano Ronaldo had just left the week before for Juventus, so his #7 spot in the dressing room was empty. We saw the baths, where Ronaldo used to bathe. We saw the toilets, where Ronaldo used to pee. We saw the mirrors, where undoubtedly Ronaldo also spent a lot of time. We got to walk out on to the pitch, and pretend we were shooting on goal (my pretend free kicks always went in the top corner; much like my real ones). It was a very fun way to spend the morning for our soccer-obsessed family. 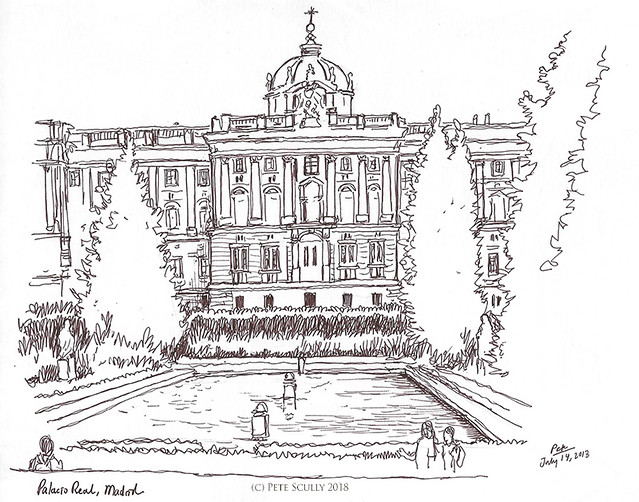 This is the Palacio Real, home of Royal Madrid. Haha. Hah. This is the royal palace (yes I know you figured out what Palacio Real means in Spanish), as viewed from the lovely Jardines de Sabatini. This is the official residence of the Spanish royal family, but it’s really only used for state functions. The current king of Spain, for those of you who are not aware, is King Felipe VI. I obviously haven’t been listening because I still thought it was King Juan Carlos I, who was on all the peseta coins when I visited Spain as a kid. The palace is on the site of a ninth century Moorish Alcazar, but the present palace dates from the mid-1700s. We didn’t go inside; I’m sure the royal trophy room is a delight but does not have as many European Cups as Real Madrid. We were out and about walking, and we strolled over to this part of town to look through the gardens, there is a small labyrinth and several nice ponds, and then I came across a group of urban sketchers dotted around drawing this building. We hadn’t had dinner yet so I asked my wife if I could just quickly do a 20 minute sketch. I was suddenly inspired by all the sketchers, the biggest group I had seen out in a while (this was pre-symposium), and I just wanted to join in. So, good time for a rest (actually my son decided to run laps), and I stood and drew. I didn’t really interact with any of the other sketchers but I peered over their shoulders, some very nice work that made me just want to draw stuff. If I had time I would have liked to have sketched the cathedral adjacent to the royal palace.