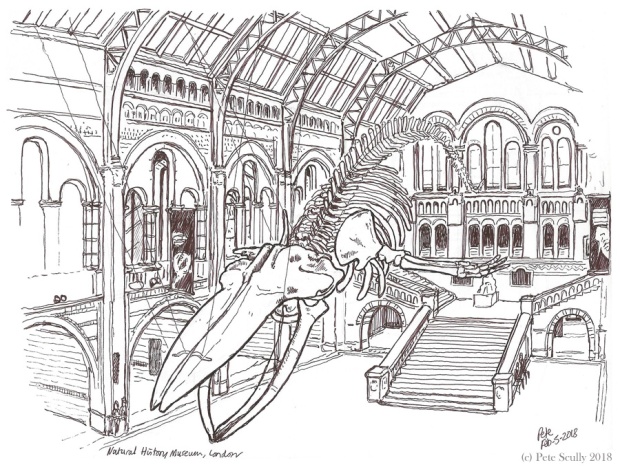 Back in February, I went back to London for a very short (unexpected) visit. I was down in Devon for a few days, and then back home in London for a day before heading back. For my one day in London, there was only one place I wanted to go – probably my favourite place, the Natural History Museum. It really is the best. I want to spend all day there some day, just drawing, drawing and drawing a lot more. I got a late start on this day, partly because, hey, nice to get a lie in after a lot of busy busy, but also because I’d spent the previous night with friends in Camden Town, after a long journey back from the South West of England. So I made it to the Natural History Museum by almost lunchtime. It was the first time I have been there since Dippy moved out. Dippy was (sorry, is) (if you call being a skeleton of an extinct animal present tense) (I say skeleton, it’s only a model) moved out last year to go on tour around the country, and make room on the ground in the Hintze Hall for more fancy events. Dippy was a Diplodocus, by the way. I realize I’m making Dippy sound like a House Elf. I sketched Dippy’s rear end back at the end of 2016, shortly before Dippy’s departure. Dippy was replaced by the large skeleton of a Blue Whale which now hangs majestically from the ceiling, the largest mammal in the world. I really wanted to sketch it. I don’t know if the Blue Whale has an inventive nickname yet, Bluey or Whaley, but I look at it and imagine I am one of the Avengers, facing down against a Chitauri space vessel. Well, in my head obviously. I’m not standing there doing Hulk impressions. I sketched from above, from one of the staircases in this most magnificent of London buildings, the sort of building that makes me really wish I had never left, that makes me so proud to be a native of a city that has such a place just right there where anyone can go and learn every single day. Sorry Davis, your bike museum is fine, but my heart is in Albertopolis. So, I drew Bluey the Whale from above and always intended on adding the colour, the browns and golds with purple tinted shadows of the museum, contrasted with the pale luminescent blue of the skeletal whale, but my friend Simon arrived and I didn’t want to keep him waiting about while I faffed about with the paints, so I left it as it is. We went around and looked at all the dinosaur skeletons and stuffed animals, and he expressed his grief at the removal of the much loved national treasure Dippy, which made me laugh as he’d just told me he hadn’t stepped foot inside the museum in well over twenty years.

I did draw one dinosaur though, the one above. “Dinosaur” the sign called it. Thanks, but isn’t this, you know, Iguanadon? I know it is. They have moved everything around in there since my last visit (just over a year before) but I know my NHM dinos. When I was four or five I went there with school and was the resident dino expert in my class, counting vertebrae, knowing all sorts of things I cannot remember now (though I still have a couple of my old childhood dinosaur books, themselves relics of a past scientific age). It turns out this is The Dinosaur Formerly Known As Iguanadon, now renamed Mantellisaurus after its discoverer, Gideon Mantell. I wish I had discovered a dinosaur, maybe I could have one named after me. Scullysaurus has a nice ring to it. I don’t know what I’d be doing to discover a dinosaur, I don’t exactly go out digging in the rocks, but I might find one in a park or an art shop. It wouldn’t need to be a ‘saurus’ either, I would take a ‘dactyl’ or a ‘docus’, even a simple ‘don’ like my old big thumbed friend Iguanadon here. Maybe Pteranodon was named after a Pete but they mis-typed his named, we all do it, I’m always typing Ptee or Pere, to the point my autocorrect has given up and says I can be called whatever I want.

We were done with the museum, and it was dark outside already. I could have spent hours longer in there, but I had to get back to Burnt Oak as my family wanted to take me out for a curry (I was flying home next day), so Simon and I walked down to South Kensington and into the little shops there, and I did one last sketch, of South Kensington Books. Small independent bookshops are among the best things in the world, because I am the sort of person who says so, having worked for a couple over the years. I want to draw all of the old bookshops in London, while they are still there. Actually not a day goes by when I don’t miss London, this London, not the crowded working rainy expensive irritated London, but my London, the one I spent my teenage days looking for on Saturday afternoons with a travelcard. I am glad to have had an unexpected afternoon there, a last minute very short trip, but it reminds me how much I really miss it.

6 thoughts on “the bones of the blue whale”