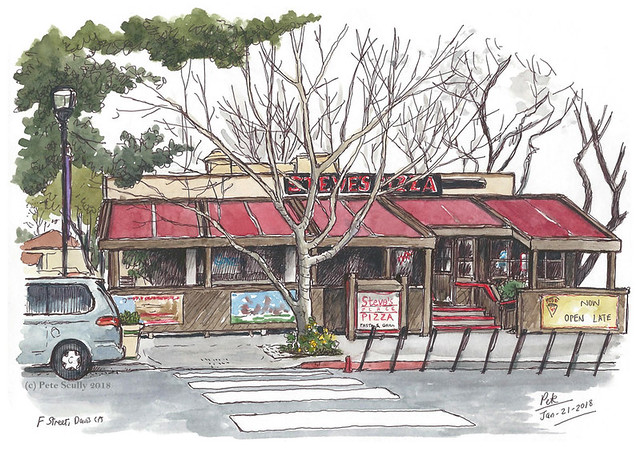 This is another from late January. It is Steve’s Pizza on F street, Davis. Or is it Steve’s Original Pizza? It was called that for a while. No, the sign says it is Steve’s Place Pizza. (It might be Steve’s Pizza Place). My son tells me that no, it’s Steve’s Pizza Pasta and Grill. I think it says Steve’s Place Pizza Pasta and Grill. Whatever it is called, if you go there you will get pizza, and presumably it will belong to Steve. Until you buy it. Presumably also it is Steve’s Pizza, Pasta, Grill, Salad, Alcoholic Drinks and Non-Alcoholic Drinks. I don’t know if it’s necessary to say everything on your menu in your name. There is also a sign that says “Now Open Late”. So this probably means that if it says they open at 5 you should probably go around 6, in case they aren’t open yet. I don’t know, I have trouble with signs. I really like Steve’s pizza, I must say, we order it at work, and also this was the first pizza that my son would ever eat, having always turned his nose up at pizza up to that point. Honestly, I didn’t know what sort of kid refuses to eat cheese pizza. Any cheese pizza, he just refused it all. He should try the sort of pizza I used to eat when I was that age, the frozen solid mini-pizzas from Asda, microwaved and eaten with baked beans to give them some flavour (always makes me think of watching Rod Hull and Emu while eating that, for some reason) (remember that? Grotbags and the Pink Windwil, that was one weird show). Well ever since going to a Pokemon birthday party at Steve’s and trying their pizza, he has loved pizza. Only cheese though, nothing too extravagant.

3 thoughts on “give you a pizza my mind”