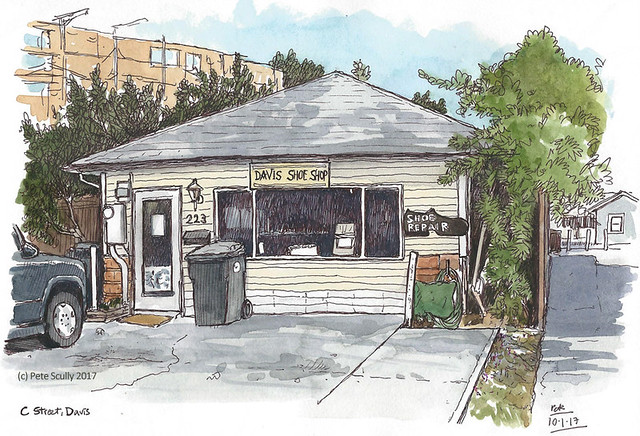 Another one from over three months ago. Time moves fast. This is a shoe repair shop on C Street called the Davis Shoe Shop. Shoe repair shops are great set-ups for jokes. Like for example, “My friend said he was a member of the shoe repair men guild, I said that was just a bunch of cobblers”. Yeah, that doesn’t work if you don’t know what I mean by cobblers. Also it just doesn’t work. So, a cobbler is someone who repairs shoes, you know that. Well in British English at least, if you say something is ‘cobblers’ or ‘a bunch of cobblers’  it means it’s bullshit or not true. Like, if I said “I had lunch with Prince William today,” you’d say “cobblers” and it means you wouldn’t believe me. So a better joke might be, “All my friends are shoe repair men,” and the appropriate response would be “Cobblers”. You could also say, “I went to get my shoe repaired the other day, and the guy said he couldn’t do it, but he did fix me a fruit basket. Turns out he was only a Peach Cobbler.” See, yeah that doesn’t really work either. This is what I do all day, I try to think of joke opportunities that can fit any potential situation, but I don’t know any situation that would allow me to use that one, and nobody would laugh at that one anyway. File it under ‘dad jokes’. Not my dad, he wouldn’t tell jokes as good as that, but my son would definitely say I would tell jokes as bad as that. Situation specific jokes are handy though. A couple of days ago my wife was telling me about a joke she read on one of her Disney blogs that she likes (Disney blogging is a really big thing) that made her crack up, but you really had to be a Disney fanatic to understand it. Needless to say I didn’t understand it. We got talking about different genres of blogs and she was telling me about Credit Card blogs, people do have forums and blogs where they talk about different credit cards, pros and cons, points and deals, that sort of thing. Apparently it’s a thing. So I started wondering what credit card humour would be like, whether I would be any good at it (I thought I’d take a swipe at it, if you will). (See that doesn’t make sense because take a swipe means have a go at it, not give it a go; oh, the English language, what are you like). Anyway I eventually came up with the following, feel free to use it in any situation you find yourself in with credit card enthusiasts. “So I was shopping for kitchen utensils and I accidentally chopped off six of my fingers! I didn’t mind though, because I only like to show my last four digits.” No, that doesn’t work. Ok how about this: “Why does a credit card blogger cut two fingers off of each of their gloves?” No you can see where that’s going, that’s rubbish too. Or how about “Did you know in America they don’t have chip-and-pin? Instead they have fries-and-pin”, yeah that one is, look credit card humour just isn’t as funny as regular humour. (Side note, I think this all counts under the heading “The author’s explanations are so boring, by the time he gets to the point you already forgot what he was talking about“.) Ok back to the Shoe Repair jokes. “What’s a shoe repair man’s favourite type of music? Sole Music.” (That’s weak, even for me) “What’s the difference between a shoe repair man and a wild animal doctor? One fixes heels, the other one heals foxes.” Ok that one is pretty good, maybe more of a joke-in-progress. “What is a shoe repair man’s favourite Star Wars movie? Brogue One.” Actually no, “The Laced Jedi”. Actually “Sole-o” (that’s the new one). The comedic possibilities are endless. Not very funny, but endless all the same. Perhaps the best sort of humour in this genre is more physical rather than descriptive, that is, “shoe don’t tell.” Ok, I’m done.

One thought on “shoe business”