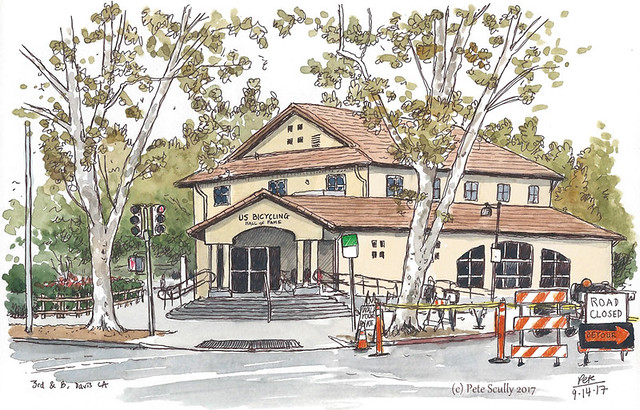 The US Bicycling Hall of Fame in Davis is found on 3rd Street. You know I have never been in there? I guess I’m not really that interested in Cycling. Oh I ride a bike every day, I love actually riding a bike, I’m just not interested in Bikes, or Cyclists. Yet here’s the thing, I am very interested in cars and the history of cars, I love to draw them, but I don’t drive a car myself. I sketched this from across the road on B Street. I remember several years ago when the Tour of California kicked off from Davis, Lance Armstrong (in his pre-ignominious-fall St.Lance days) was participating and had his bike stolen from Sacramento the day before. Someone actually half-inched his bike! Now Davis is a bit of a cycling center you might say, in fact we were the first city in the US to have bike lanes, that’s right, Davis was first, number one, us. We’re pretty good at it too. This time of year though on campus it gets a little chaotic, with all the new students and all the new freshly-minted cyclists going in all sorts of directions, careening across corners and riding round roundabouts. The bike crashes are often spectacular; it’s worth cycling defensively at this time of year, and wear a helmet. Also, new Davis cyclists, don’t go through stop signs downtown (or anywhere) because the local cops do actually hide around the corner catching errant cyclists out, and giving out tickets. I’m glad I live in such a bike-friendly city like Davis though, with all its bike lanes and bike shops. Helps that it’s flat too, because I don’t like riding up hills, or any kind of slight incline. Which is funny because I love hills, I love walking up and down hills, and seeing them from a distance.

One thought on “on yer bike”