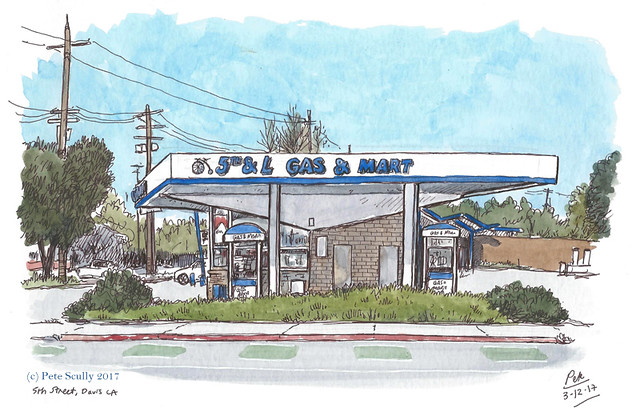 And after that Davis history lesson, and that Guardians of the Galaxy blaster, here is a … gas station. Very exciting. I used to pass by this for years when cycling home and think, oh I must sketch that one day. So one day years later I decided to do so. 5th & L Gas & Mart. I mean, what else can you say? I presume Mart is short for Martin, or Marty maybe, and Gas must be short for Gary, perhaps they are like a retired pub-singing duo who quit the rock’n’roll’n’pint-o-bitter lifestyle to open a petrol station in California. Perhaps “5th & L” is actually one of their old tunes, a play on words where you think, “5th and L” oh that’s an intersection, but they sing it fast over an over so it sounds like an expletive, “Fiff’n’ell!” Gas is a funny word though. Coming from England, calling petrol “gas” seems very odd. After all, it is a liquid. Oh the fun times when we first moved here and we would go to a petrol station and they would say, do you want some gas? And I’m like, no obviously we want liquid, gas will be absolutely no good at all, it would just blow away, and they’re all looking at me like, who is this Australian? (In all seriousness I used to get called Australian all the time because many Americans have difficulty with the difference between a London and Australian accent, especially when I keep saying “G’day cobber, ya flamin’ gallah”, humming the tune to Kylie Minogue’s “I Should Be So Lucky” and eating Lamingtons). Ok, I didn’t really think gas was non-liquid, I know that “gas” is just short from “gasoleum”, I’m not thick you know. But I would have said that if it had come up, for a laugh. Yes you’re right, it wouldn’t have come up like that, because. in California, you serve your own gas at the gas station, unlike in Oregon where someone else does it for you, by law. I remember our first trip to Oregon though, an exciting six hour drive to Medford, all I wanted was to get across the border and pretend I thought they meant gas as in the gas rather than gas as in the liquid at the petrol I mean gas station. Of course I didn’t. (I was excited about going to a state with no sales tax though, we live for the simple pleasures).

This is the sort of conversation with myself that I have in my head when sketching. So it was quite a relief when I was interrupted twice by passers-by who recognized me from my show last November (hello again by the way, if you’re reading!).