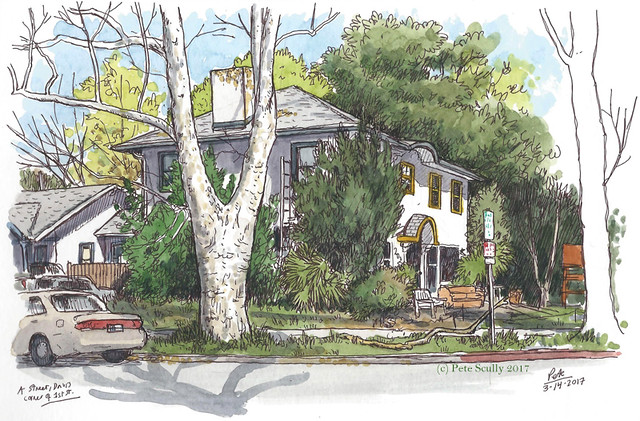 Here’s another from just over a month ago. This building, which I have sketched before, sits on the edge of campus at 1st and A (now there’s an address). I daresay that tree is all full of leaves now. When looking at this I think of Green Lantern, because I was listening to a podcast where they were talking about Green Lantern a lot (it wasn’t very interesting to be honest). When I look at that tree though I can’t help but think it looks like the legs of a tall spindly white creature with its head and arms stuck under the ground. Or maybe it is a giant bony hand giving the classic two-fingered gesture we British love to use, the one said to originate in the Hundred Years War with English archers taunting their French counterparts who had failed to chop off their bow fingers. Or perhaps a giant tuning fork, obviously this one is tuned to the key of “A” and that is how “A Street” gets its name. Have I finally cracked the code? Is this really why “A Street”, “B Street” etc are called that? So much meaning is lost in the legends of history that we really cannot say for sure. Look at London street names for example. Pall Mall. You probably think, oh that is named after a bloke called Paul and I suppose he used to have a shopping mall there, but you’d be wrong. It’s named after a game that was popular in Italy, palliomaglio (“mallet-ball”, a bit like croquet) which was played around there a few centuries ago. A bit like if you built a road over a popular basketball court and called the street “Basket-ball” and then everyone forgot what basketball  was. Then there is the “A1”. You’d think that it was so named because there was a bloke called “Al” (or a lady, maybe Queen Alexandra) and this was their road, but in fact it is because it used to be the Great North Road, a really long road (or series of roads) going from London right up to Scotland, which was in 1921 called the “A1” when the Ministry of Transport decided to give main roads all sorts of alpha-numerical designations. I grew up right near the A1. I like the history of roads. It would be fun to write/draw a book about the history of certain roads. I always wanted to do one with my fellow London-road-history-enthusiast friend Simon focused only on the one-word London street names. You know, like “Whitehall”, “Cheapside”, “Piccadilly”, “Lothbury” etc. One game we like to play when we meet up is to compete with how many we can name until the other cannot think of one, it’s a fun game, you should also try it (London streets only) (and you can’t have streets like “A1”, “A4” etc) (oh and you get extra points for etymology).

One thought on “oh you are A1”