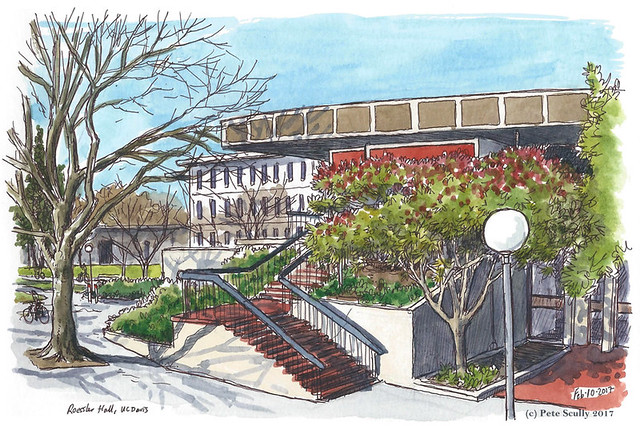 This is Roessler Hall, UC Davis. Or at least, part of it. Sketched from just outside the Physics Building. After all the big winter storms, destroying trees and swelling rivers, the sun finally came out. Elsewhere, the Oroville dam threatened to burst and large surrounding areas were evacuated; this has ceded a bit now, but it’s only February and there will be a lot of snowmelt later this Spring, so northern California is in for a bit more flooding I think. Feels a bit like the first winter I was here, over 2005-2006, but after years of drought it’s more of a surprise. It’s a worrying situation for a lot of families and I really hope for the best. I recall the storms and floods of early 2006, followed by the searingly hot summer that year, and being so new to California it was an eye-opener for someone like me, from a huge city like London coming to a small city in a vast agricultural valley, to understand the impact of weather on the land. I watched a lot of KCRA3 News and its Chief Meteorologist Mark Finan (Sorry, “KCRA3 Weather Plus Chief Meteorologist Mark Finan”, you have to say the full title otherwise the weather gods are displeased), who quickly became my favourite figure on Californian TV. He got all the exciting weather, and you knew the weather was not going to be interesting when they let Dirk Verdoorn, the reserve keeper, the Michel Vorm to Finan’s Hugo Lloris if you will, take over the reins. I really like Dirk too actually, but Finan with his long unwieldy official title (my wife and I used to joke that it actually just goes on and on, “…Emperor Beyond The Sea, Supreme Mugwump of the Wizengamot, Lord of the High-Slung Bottoms of Zob…”) became an early on-screen hero of mine in those nascent days as a new Californian. Well anyway, on this day at the end of last week the sun was out, the blossom was about to break through, and though the rain is back now, we’re all ready for a bit of Spring colour in this headache of a 2017.

3 thoughts on “from Roessler with love”