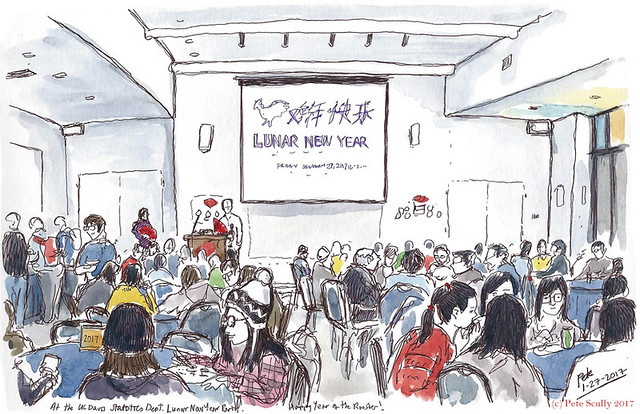 The Year of the Rooster has arrived, and we had a celebration of the new lunar year in our department at UC Davis. We have a lot of students from China, as well as from Korea, and so we have a big party to mark the festive occasion. This year we had a fun karaoke game – the songs were in Chinese, but our non-Chinese students were invited to sing them, in Chinese (written in pinyin on the screen). They were then given marks out of ten by judges like in the Olympics. It was great fun. I sketched the whole room as people ate and chatted. Now apparently it’s the Fire Rooster this year (the last Fire Rooster was in 1957). So, to all my friends from China and other countries that celebrate lunar new year, I wish you a Happy Year of the Rooster. Or is it the Cockerel (as we’d say in Britain)?