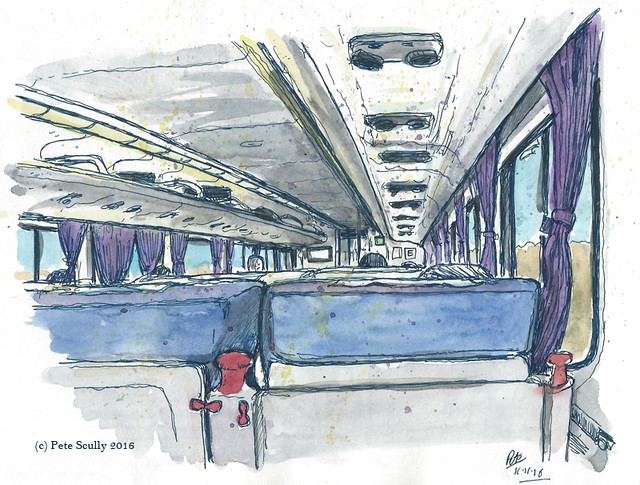 I haven’t posted much lately, though I have a lot of sketches to post. It’s not because I’ve been travelling (and I have), it’s not because I’ve been busy (though I have), it’s not because I’m rather lazy (yes I am), it’s not even because I’m so mentally exhausted from all the news in the world right now (yes we are). No the real reason is that I have a pile of stuff on top of my scanner that I couldn’t be bothered to move to scan anything. You know how it is, I’ll just put this magazine here, oh and these books, this jumper, oh and all my mail, and this Lego, a pencil case or two, the car, a turkey and all of my family, all piled up on top of the scanner, so moving it off of there and finding a space for it takes too long, so I’m behind on my scanning. This week I finally sat down and moved the actually-admittedly-quite-small pile off (not reorganized, just moved) and scanned the remaining sketches from the last sketchbook, Seawhite #5. First up, sketches from my Memorial Day trip to San Francisco. I didn’t go there with any real purpose other than a need to get out of Davis for the day. The family were out of town visiting other family, so I hopped onto a train down to the Bay, sketching in the Amtrak as I went (above). I probably don’t need to do any more of those train sketches but I still do it, and it looks nice. 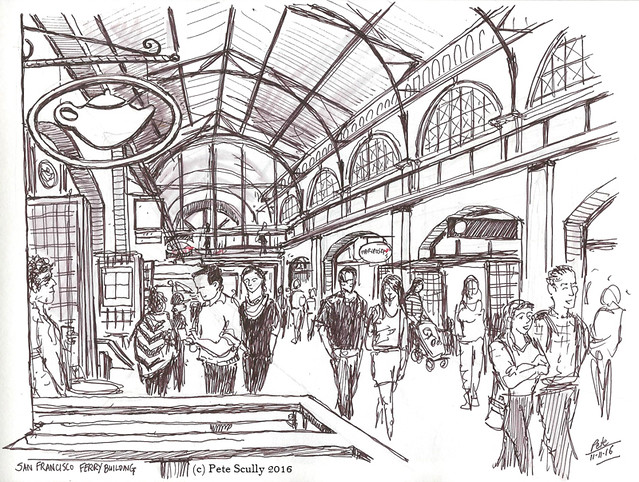 I stopped into the Ferry Building and sketched the view from a little winery/cafe place. I really like it inside the Ferry Building, plus it’s like a middle class theme park. Cheese-tasting, Sur-La-Table, Oysters, Soap, Wine, it has it all. I had no plan of action for sketching the City that day, I just needed to be somewhere with different streets, yet familiar streets, and see where they took me, but as it turns out I unexpectedly ended up following a similar path to the sketchcrawl I did back in November 2007, nine years previously, starting at the Ferry Building and ending up at Rogue in Washington Square. Spoiler alert for the end of this post. 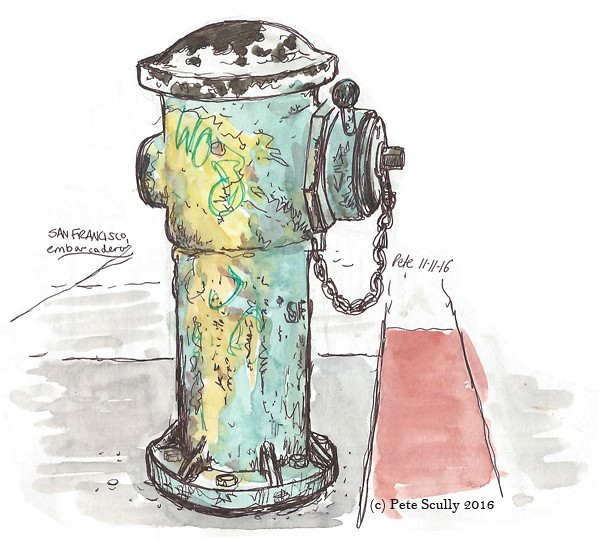 I drew a fire hydrant along the Embarcadero. These ones are interesting, they have this weird handle on the front, they look funny. This model has been on my sketch-wish-list for a long time. Hey I like fire hydrants, ok. A lot of joggers jogged by, as they do. 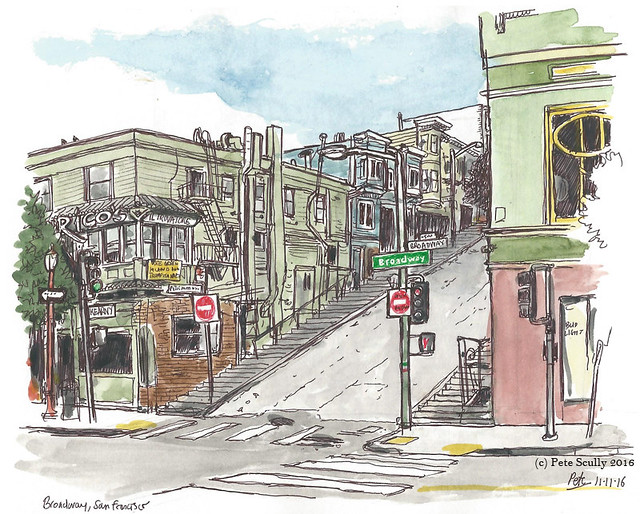 I got a bite to eat at a food truck and sat on the side of the road eating it, like you do. It was curry, it wasn’t cheap. It is designed less as real authentic street food and more as a way for local techsters and moneyboffs to grab some real authentic street food and pay more than in a sit-down restaurant. The city ain’t cheap. I walked up Broadway, a steep bustling thoroughfare leading to Columbus, where the old raunchy nightspots and strip-clubs are found. I was more intrigued by the angle of the sloping streets (“I only read Playboy for the Articles”…”I only go to the Red Light District for the Angles of the Sloping Streets”) (side note, I’m reminded of when someone told me they “only read the Daily Mail for the TV Listings”, so I said “I only read Breitbart for the Cereal Ads,” but enough current affairs). North Beach has some epic hills. If you want to practice the way perspective interacts with steep hills this is a great place. Lisbon too. And anywhere with hills. When I was done with this, I walked around to Columbus and certainly not up those steps. 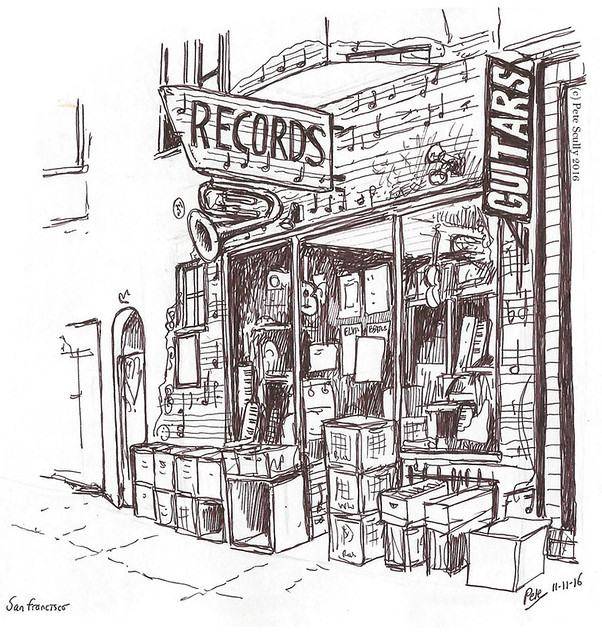 I did pop up Green Street, and saw to my pleasure that music store I sketched back in 2007, if you remember that far. Here it is on Flickr; I like my comment that I would draw it “Some other time, definitely”. Well I kept my promise to my 31-year-old self! It’s pretty much the only promise I kept to my 31-year-old self but there you are. I did go inside this time – it really is crammed with stuff! Loads of old tape-decks and video players, as well as a guitar shaped exactly like an axe. I didn’t colour the outside in this time; maybe some other time. Definitely. 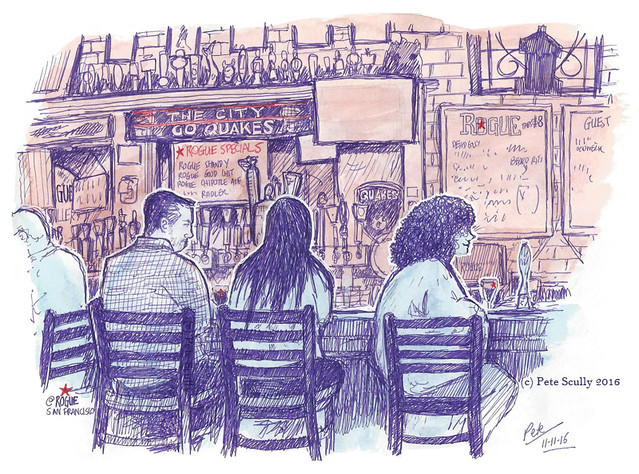 So just like in 2007, when I met up with sketchers at the end of the ‘crawl for a beer at Rogue Brewing, I did the same this time, except without the other sketchers, just by myself. I sketched the bar in purple, using a bit of blue and pink, and white gel pen. And then it was back to the BART, back on the Amtrak, and straight to the couch to watch TV. It’s always nice having a day in the city.