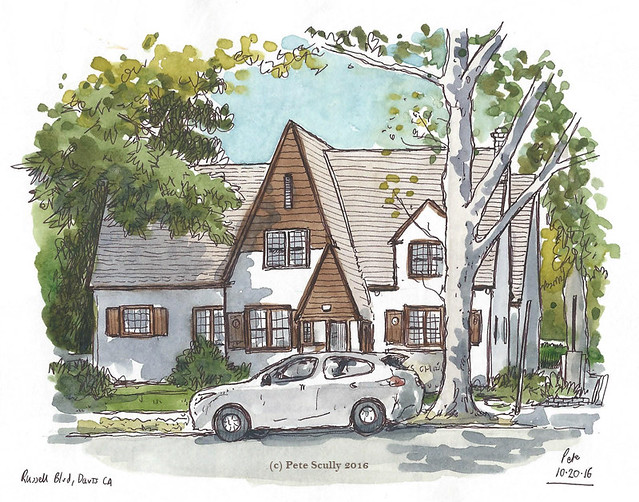 I do have two exhibitions going on right now, and have even given talks about sketching, organized a sketchcrawl (in the rain), oh and just had a book published a few weeks ago, and I know you all did Inktober and so on, but I gotta say, I didn’t sketch much in October. It was a busy month, working, coaching soccer (Go Quicksilvers!), doing all the art stuff, but for some reason my sketches were few and far between. I did do a few though. This one above, of the building known as the Institute of Religion in Davis, I think its where the Mormons go. It’s on Russell, right opposite campus, I cycle past here every day thinking, oh I should draw that sometime, those triangles are pretty triangular. So I sketched it one lunchtime, when I was in an all-day training for leadership (or something, I’ve done a lot of all-day training workshops lately). Always feels good to be out sketching, listening to the Football Weekly podcast. I have a few more recent sketches to post. I drew another of the Manetti Shrem Museum, and of the construction going on at the South Silo. Spoiler Alert, that’s not finished, but the Manetti Shrem, it’s nearly open! Just another week! I’ll do a retrospective of all my in-progress sketches once it’s all open. I’m very excited.

3 thoughts on “sing me something new”