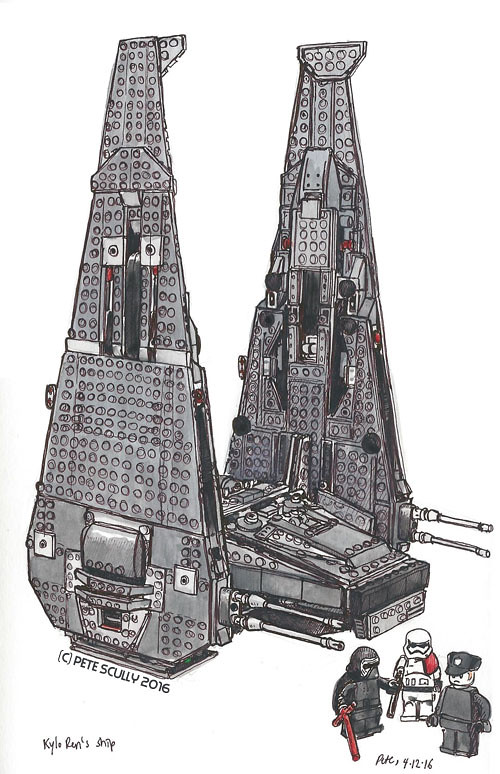 And back to the Lego. This is my son’s Kylo Ren spaceship, from a movie called The Force Awakens. Did you see that? It’s pretty good. It’s about this girl, and there’s this guy, and there’s this other guy who’s really grumpy, and they meet these guys and then all this stuff happens and the force wakes up, and the end. I saw it four times at the movie theater, or rather I saw it twice at the cinema (that is, in England), and twice at the movie theater (ie, in America), and one of those times was at the IMAX. I’ve seen it a couple of times at least on DVD now. So the shiny stormtrooper, if you live in London and go on the Northern Line, her other job is saying “This station is Chalk Farm. This train terminates at Morden, via Bank. Please stand clear of the closing doors.” I recognized the tall hairy bloke as well, I’ve seen him in something. So, I loved the film. I must point out that I am a massive Star Wars fan, I like all the Star Wars, all the wars, they’re great, and then there’s the stars, I love them, love all the different stars. Sirius, the Sun, Rigel, Nigel, Rigella, all the stars.

So there is a fair bit of Star Wars Lego in the house, and this is the tallest. Those wings are collapsible, much to Kylo’s annoyance. He needs those big wings, none of the other dark lords had wings that tall. Vader’s wings were tiny, and Darth Maul’s. You just know General Hux made him get collapsible wings so they would fit in the Star Destroyer. “Do you know how expensive those big bay doors are Ren?” he says. “You should be careful I don’t make your bay doors bigger Hux!” Ren retorts, before they both give each other very embarrassed looks, and Ren says “sorry that came out wrong, I need to go and speak to grandfather’s melted helmet,” before Hux suppresses a giggle and Ren shuffles away. On the back of this ship is a sticker that says “Chewie is my co-pilot” which obviously he put there years ago and forgot was there. That’s the thing, when you turn to the Dark Side do you go back and delete all those Facebook photos of selfies from high school, do all your friends unfriends you because your posts start getting all political, posting all “How to Talk to a Rebel” nonsense and changing your profile picture to a big Imperial flag with all “Proud To Be Imperial” and sharing “First Order First” posts that definitely aren’t racist against wookiees or gungans, but all seem to be stuff like “Who remembers when Coruscant was all Imperial shops, oh them were the days, now when you fly down a Coruscant street it’s all gungan blue energy ball shops, it’s a health hazard.” I bet Kylo gets into all sorts of arguments online, and all his comments are about three pages long full of links to Wikipedia or right-wing pro-first-order news editorials. He seems the type. I imagine being online was very much like that for Kylo, except I bet Facebook made him change his name back to Ben Solo because they have that bloody must-use-your-real-name policy, honestly you would think he would just not use Facebook, he doesn’t even like showing his face. I like how he smashes up his computer when he gets annoyed, that’s one way of getting a new computer. See I think that if Han and Leia didn’t keep getting him new computers every time he smashed one to pieces maybe he would have developed the emotional intelligence not to turn to the Dark Side. Then again I bet they were all like, “You’re not parking that ship in here, not unless you get collapsible wings” and he went out and got the wings made even bigger, just to rebel. Teenagers eh.

I can’t remember where I was going with this. As I said, I like Star Wars a lot. I really enjoyed The Force Awakens, but not in a fashionable smirky-cool “Hate The Prequels” way. No, I actually love the prequels, I love all the prequels. Prequels prequels prequels that’s me, I love them. Right, Lego. So I drew this in the Book of My Son’s Things. It’s a Stillman and Birn Alpha book. This was a fun sketch to do, and a fun ship to build, and play with. Note the little show running along the edge of the scan. I call that the Dark Side. Get it? Do you get it? Dark Side? No?

8 thoughts on “the tall wings of the dark side”