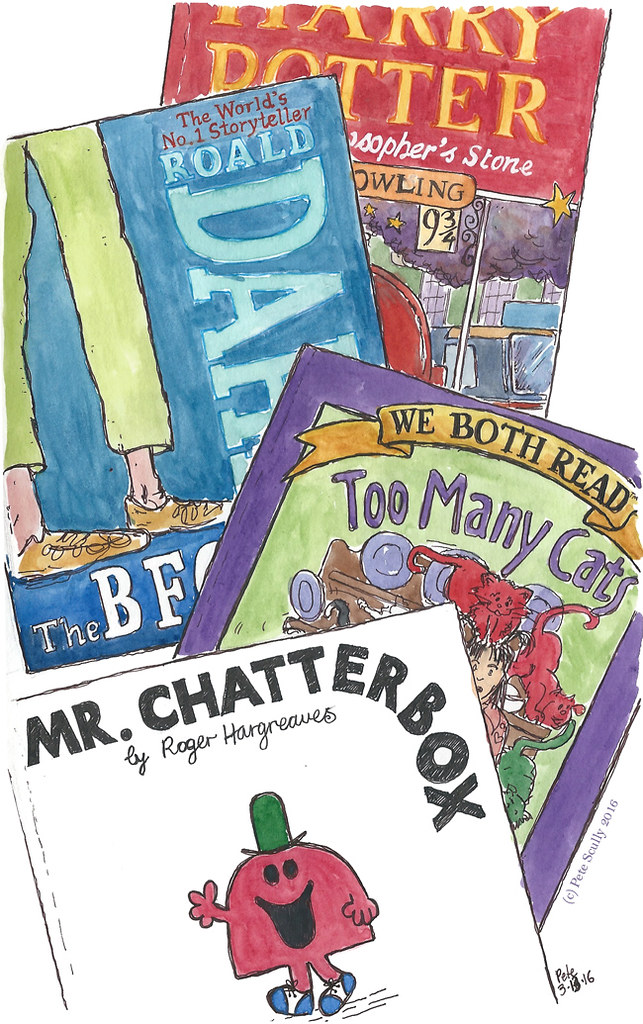 More drawings from the Book of my Son’s Things. These are some of the books that we read at bedtime. I’ve always read to him at night, though now he is a pretty avid reader himself and loves a book. These ones really had to be recorded though. First off, Mr Chatterbox. I loved the Mr Men when I was a little kid, I was the go-to Mr Men expert in our class. I remember in primary school one time we actually did a Mr Men performance for assembly and made huge paper Mr Men – whose job was it to draw them? I was “Mr Mr Men”. And the “Little Miss” series too, I loved them though thought that calling them “Little” was a bit belittling. I think I liked Mr Rush best, or maybe Mr Silly, but my son, who got his Mr Men interest basically from me, loves Mr Chatterbox. Rather, he likes how we read it. I do the Chatterbox voice super fast, and we have now read it so many times that the story has evolved into something else entirely. One bizarre version of it replaces all nouns in the book with the word “hat”. We deconstruct other Mr Men books too, such as Mr impossible, which we refer to as Mr I’m Possible, because he seems to only do things which are actually possible, if you look closely. Ok, next book, “Too Many Cats”. No, I’m not ready for that one. Next up, “The BFG” by Roald Dahl. We read this last year, before embarking upon a Dahl-fest reading blitz, picking up loads of his books one after the other (I love “the Witches” best, though when I was a kid it was “George’s Marvelous Medicine”). He reads them at school too, and last Christmas while in England we went to the Roald Dahl museum at his old house in Buckinghamshire. That was pretty brilliant. Since then my son has been reading a lot about Roald Dahl’s life at school and coming home with all sorts of interesting facts. Ok, next up is “Harry Potter and the Philosopher’s Stone” by JK Rowling. He hadn’t seen the movies, but one of his friends really likes Harry Potter, and my wife and I do as well – the first film had come out just before we met, and we read the books and watched the films together. So recently we started reading the Potter books at bedtime, and he loves them. I have great fun doing all the voices, especially Snape (poor old Alan Rickman! He was my favourite actor, so sad he died). We are watching each of the movies upon completion of the book. We’re up to “Prisoner of Azkaban” now, and I can’t wait to watch that film again.
Right, ok, “Too Many Cats”. We got this book years ago before he was learning to read, it’s one of those where you read one page, and then the child reads the other which might have two words on it. I think because he knows I can’t stand the book he still gets me to read it, though he himself reads full novels now. It’s another one that we just have fun deconstructing and having fun with, it has us both laughing at the silly cats. We now have this idea that the main character Suzu is actually a time-traveler with anthropomorphic rabbit feet stuck in a strange time-loop and the ten colourful cats are pan-dimensional visitors carrying warnings she fails to fully understand. I don’t know, you need to read it. I hope they never make a movie about it. Too Many bloody Cats. I had to draw it, another one of our many fun memories.