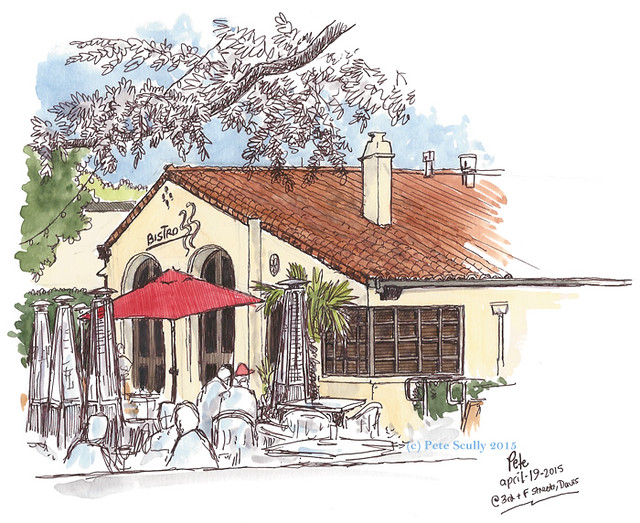 I went to see Belle and Sebastian last week. That has nothing to do with this sketch, but I am telling you anyway. Now if you have followed my sketches at all you will of course not know that probably at least 75% of them were sketched while listening to Belle and Sebastian, except that I use lyrics from their songs as blog post titles with alarming frequency. They have a pretty unmatched residency on my iPod matched only by David Devant, and the various podcasts I listen to ( which are headlined by “Football Weekly”, “The History of the English Language” and “Rachel and Miles Xplain the X-Men”). But the Belle and Sebastians, they come up Most Played, and so when I saw that they would be playing in Davis at the Mondavi Center, I had to go. And it was a brilliant show. The Mondavi is a great venue, and in fact it was the first time I had been to a show there. Yes, in almost ten years – this was well worth the wait. They played an incredibly varied set, mixture of old ones, new ones, fast ones, slow ones, and the lead singer Stuart was actually really funny. My wife came and she loved it. She knew all the songs because, in her words, “they remind me of being in the car with you”. I actually started listening to them around the time we first met, back when we lived in France that one year, I had bought the Boy With the Arab Strap album at a CD shop in downtown Aix-en-Provence (that I used to go to like every day) and have made her listen to everything since. Really though, they remind me of my time in Davis. Their 2006 album The Life Pursuit had a really distinctive sound, and every time I play it, I am brought back to 2006, that first summer in Davis, the epic heat, the bike rides around town, my discovery of watercolour and starting to sketch everything a lot more. That album came out on the very last day of my twenties. The funny thing is, I hadn’t actually listened to it for ages. I wasn’t, for some reason, on my iPod where everything else they did was, even more obscure stuff. I don’t know why I shunned it, I think part of me didn’t want to be reminded of my first year here, when everything was so new, so different, exciting. Looking back it was a tough transition, settling in a new country. I worked two jobs to keep me busy, ploughed into my art, and when I think of that year I think of this album (this, and Mr.Solo’s first album which I also listened to endlessly). Now in my tenth year over here I’m older (and fatter), more cynical (yeah right, like that is even possible), I have a fast-growing son (I live in a house made mostly of Lego and Pokemon cards), I feel different. It’s only natural. So when Belle and Sebastian played a whole bunch of songs, LIVE, from that very album, songs that I absolutely loved (particularly “Another Sunny Day” and “The Blues are Still Blue”) I was brought right back in a great way: the people who actually came up with these songs are actually playing in this actual city. Yeah, I liked that a lot. As soon as I got home I dug the album out and put it straight on my iPod, mystified as to how I’d not uploaded it on there before. I love their new album “Girls In Peacetime Want to Dance”, there are some cracking tunes. “The Power of Three” is my current listen. So, a great show, an evening to remember in a really lovely venue.

As I say none of that has anything to do with this sketch, I didn’t even listen to them while sketching it (it was a BBC History podcast about Galipoli). This is Bistro 33 in downtown Davis, a restaurant based in the side of the old City Hall, a building which has been a fire station, a police station many things over the years but is now a restaurant with a pretty large outside seating area. I kept it quick because frankly my seasonal allergies have kicked into gear in an epic way this week, and on that Sunday they were starting to destroy me a little. I would not have gone out at all but that I really needed to sketch some stuff. This whole week has been a bit of a sneezing-induced ‘mare. I ended up escaping inside to the adjoined City Hall Tavern to de-pollenify, before heading home. I’m still sneezing.