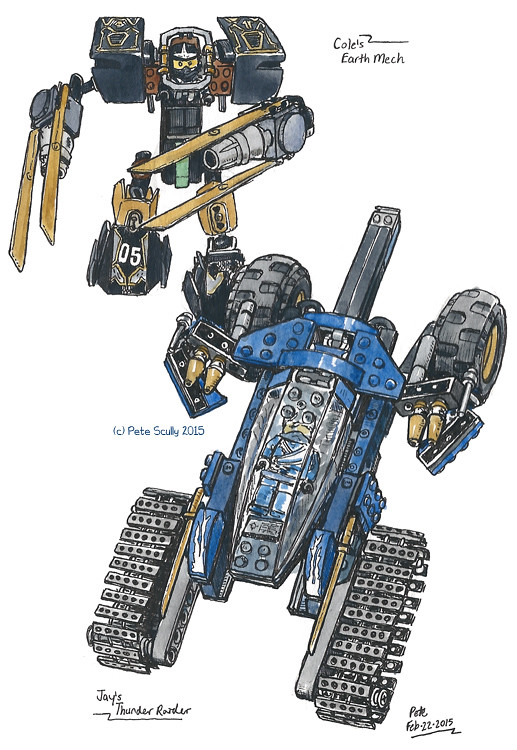 “Jump up. Kick Back. Whip Around. And…Spin.” No, these aren’t lines from a popular book-turned-movie that is in cinemas these days (“Shifty Grades of Hay”, or whatever it’s called), but is in fact the theme tune to the rather more interesting and well written kids cartoon, “Lego Ninjago: Masters of Spinjitsu”, based on the popular Lego toy line. Regular listeners will remember that I have drawn some of these toys before (my son has rather a big collection, and you need acrobatic Ninja skills to just get across the floor without stepping on one). Despite being an elaborate (and effective) toy commercial (hah, not like in my day! My favourite shows were Transformers and He-Man which, er never mind), it is actually remarkably good fun and a lot better than much of the nonsense on kids TV these days. At the end of the season three for example, when (spoiler alert) Zane (who is – spoiler alert if you don’t know this yet – a “nindroid”, ie a ninja who is also an android – hey it makes perfect sense, ok?) sacrifices himself to save his friends from the Overlord (who at the time was known as “The Golden Master” after retrieving the Golden Weapons from their hiding place on a comet and had rebuilt himself into a large robotic spider – look just go with it, alright), I was almost in tears. It was (spoiler alert) Ninjago’s “We are Groot” moment. It’s ok though because (spoiler alert) he’s not really dead because (spoiler alert) well, he is a robot after all, and becomes (spoiler alert) the Titanium Ninja. Look I promise you, this is a really good show. It’s not like that Kung Fu Panda show which was on every single bloody morning, where basically nothing happens at all, and they just talk about their feelings. Or the Amazing World of Gumball, or heaven forbid, Uncle Grandpa. God there is some annoying nonsense on kids TV these days. Not like in my day (my favourite shows were Wackaday and Grotbags which, er never mind). Anyway…these items which I have drawn here are tow of my son’s toys he got for Christmas, it’s actually all from one set, the “Thunder Raider” set. This is the name of the vehicle driven by Jay, the Blue Ninja, and is accompanied by the Earth Mech of Cole, the Black Ninja. A “Mech” is a kind of exoskeletal robotic suit. Come on look at it, you want one too. It can actually hook onto the back of Jay’s Thunder Raider. Of course as soon as I showed this to my son, he pointed out straight away that I have the wrong version of Cole riding on the Mech. A slight variation in the costume. Of course, always the perfectionist.

Drawn in a Stillman & Birn “Alpha” book in which I’m documenting a lot of my son’s stuff.