(To see a bigger version, click on the image, or just move the screen closer to your eyes). It was a Saturday in the middle of August, and it was LONDON, and I was going to meet up with some old friends for a night out. So I went down to London a few hours early to clock another panorama into the sketchbook. This turned out to be my last London panorama, not getting another opportunity in the days before I flew back to America. I’ve wanted to sketch down this way for a long time, but it’s a complicated setup of streets. This is just off of Shaftesbury Avenue – the St.Giles / Covent Garden end, not the Soho / Chinatown end – where it meets Neal Street (on the left) and Monmouth Street (on the right). Monmouth Street then meets up with Seven Dials and all hell breaks loose, honestly. It’s a complicated labyrinth and one of my favourite parts of the capital. I used to dash through here on my way from the 134 bus stop to my Medieval English classes at King’s College. On this day there was some kind of festival going on down at Seven Dials with music and balloons and a food cart here or there. I stood on the corner and sketched as much as I could, occasionally giving directions to tourists (have you maybe wondered why several of my London sketches are done standing next to those handy maps with the yellow top that are dotted around the city? It’s because I can’t remember enough to give directions any more…). One young lad, an American, did stop and ask me, “Say do you know where I can find a pub to watch the Arsenal game?” Well you’ve asked the right person! I beamed, and gave him directions to a pub I knew would be showing Spurs. Not really, I didn’t really. As I say, I don’t know the answer, so I just sent him to the Intrepid Fox, a pub I know had actually closed down years ago. No, no I didn’t do that really either. I actually waved my finger Obi-Wan style and said “You don’t want to watch Arsenal. You want to go home and rethink your life.” Ok so back to the sketching. The two yellow-jacketed security guys on the right, they kept coming over to have a peek at my progress. So, I just had to add them in. Even though they’re impossible to make out who is who they both said “that’s me! that’s me!” and were very excited about that. One thing I like about doing panoramic pictures like this, you aren’t drawing a picture of something specific and small details can be a lot of fun, and when they are people they usually blend in and are generic but occasionally they can give a sketch an anchor, something to literally draw us as humans into the scene. Also, and more importantly, it meant I didn’t have to attempt to draw the stuff that was happening in the street ahead, so I was glad the guy was leaning on the barrier at that moment. This took me a couple of hours, including time for phone calls with friends, and I did manage one more sketch before meeting up for dinner. Here though is the map of where I was when I sketched. 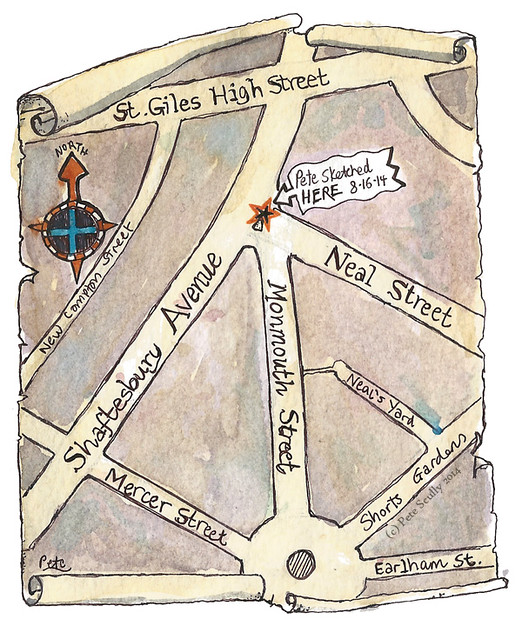 2 thoughts on “doesn’t have a point of view, knows not where he’s going to”