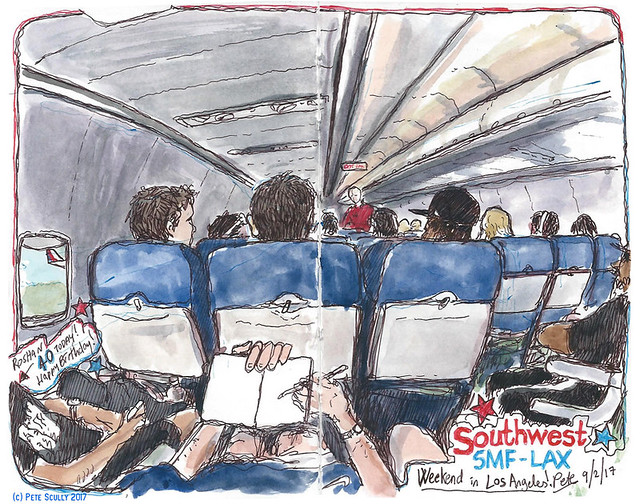 Early last month I flew down to Los Angeles with my friend Roshan who was visiting from London, for a boys weekend to celebrate his 40th birthday. I didn’t do much sketching; it was a short trip and we mostly did tourism and, well, the pub. One or two pubs! A good old few pubs. I do find it harder to sketch when travelling with non-sketchers, (not for any fault of their own, I just struggle to concentrate) but I did manage a few sketches, including the in-flight drawing above. We stayed downtown at an awesome hotel with a great view, I only grabbed a couple of quick sketches of it, but we were really close to the LA public library (which I have sketched before, years ago). 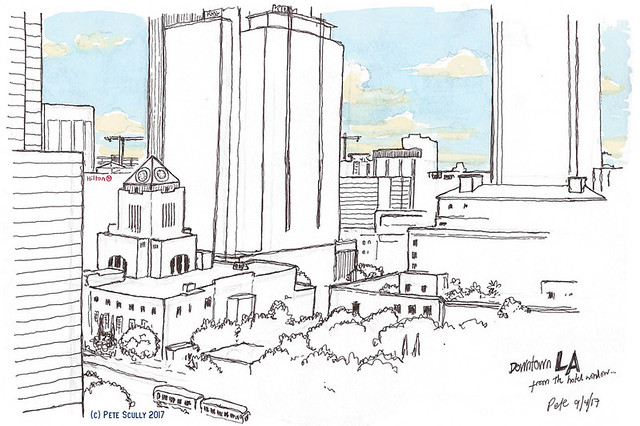 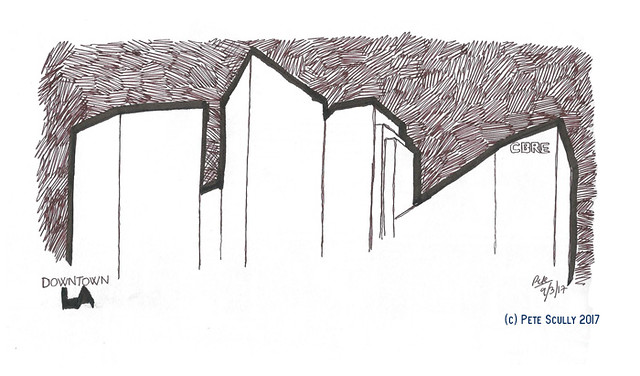 And of course, one fire hydrant. It wasn’t a 2am hydrant sketch (like on previous LA trips) but the library is once more in the background! 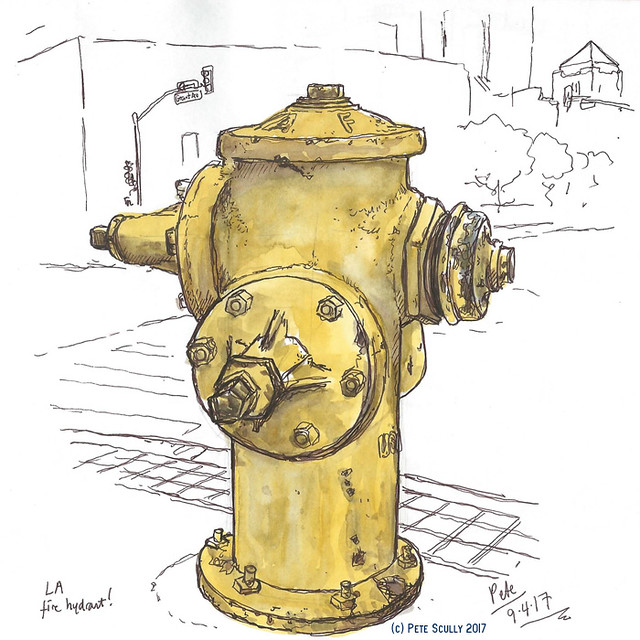 And I got a few quick people sketches down at Venice Beach, of dancing roller-skaters. I would like to go back there on a sketching trip someday, there is always so much to draw around there. I really like LA. 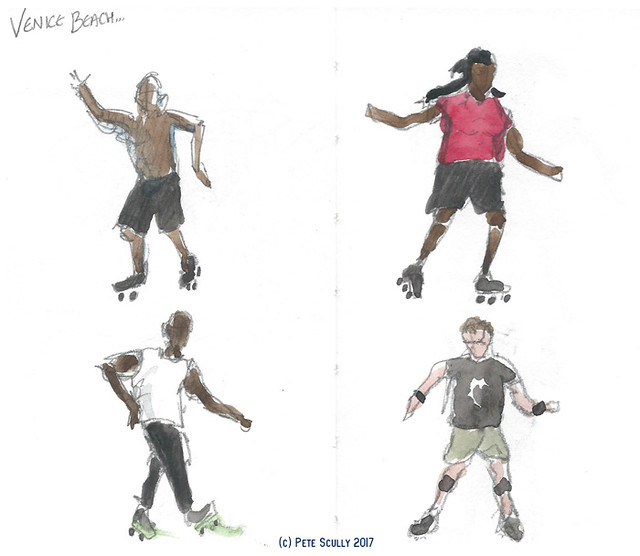 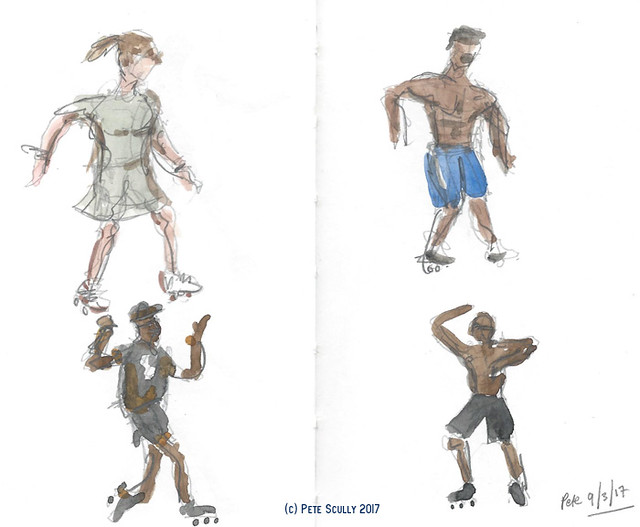 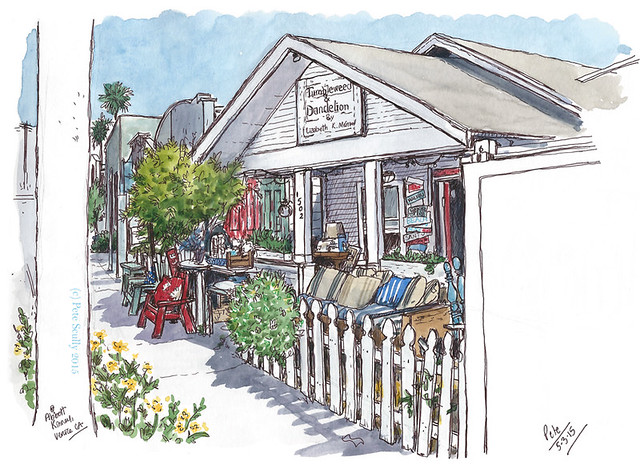 And here are the last sketches from my trip to LA last month. These were done on Abbot Kinney Boulevard, a very interesting stretch of street in Venice away from the main madness of the beach. This street was named after Abbot Kinney, the man who developed Venice, California, a neigbourhood of canals and amusements. There are still several lovely canals lined with expensive houses, and in fact many of the big streets in this neighbourhood were once canals themselves. Anyway, Abbot Kinney Boulevard has lots of eclectic stores and cafes, and I stopped outside ‘Tumbleweed and Dandelion’, who I believe sell beach-themed furnishings and stuff. I liked the picket fence and the yellow flowers. I was wearing my France football shirt, and while sketching a man from Senegal stopped and chatted with me for a while, even about the Senegal team of 2002 beating France in the World Cup, I was living in France at the time and knew several Senegalese so that brought back a fun memory. When I was done, I had enough time for one more sketch, so I drew the scene below. This is a pretty typical view on Abbot Kinney, and hip trendsters sidled by being all hip and trendy. Unfortunately I didn’t give myself a lot of time to look through many shops (such is the life decision of the urban sketcher! Sketch, or actually do stuff!), and soon I caught a bus back to Santa Monica for more sketching by the ocean, where I met fellow urban sketcher Shiho (see my previous post), before dashing to the bus for the airport. And I only just made my plane… 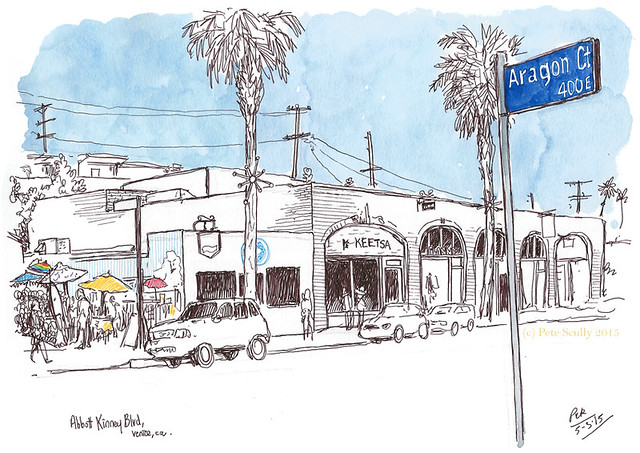 Here is the map included in my sketchbook. Yes, there is an Electric Avenue. 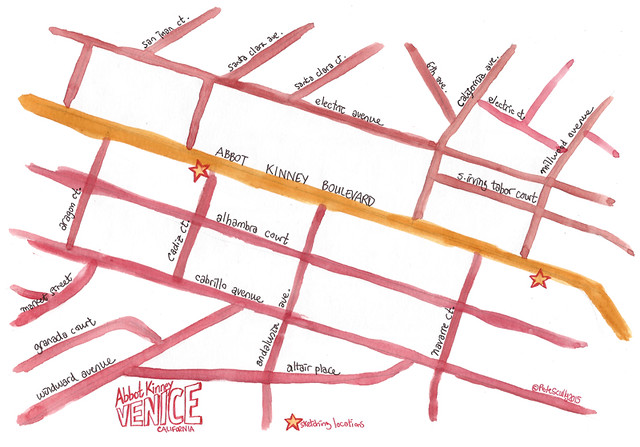 Ever more NaNoDrawMo pipes… I stood behind the Engineering building at UC Davis to draw the one above. I like pretending that these things are actually something else, like robot spying devices, or a cyberman’s torturing device. In fact it’s rather like a big elaborate pound sign (that’s pound sterling, not the # sign – which we Brits call the hash key, not ‘pound’ as Americans do. Very confusing when using banking menu systems). Below left is an insectoid intruder, poking his head through the concrete like a metal mole. Reminds me of an underwater adventurer.

Above right is a fire hydrant I attempted to sketch in Santa Rosa. I had to abandon it because I got rained on significantly, so finished it at home from memory (didn’t even have a camera). Well, I can remember what these types look like, surely.

Below, a big white dragon from outside the police station. It has two dragon-cubs beside it but they weren’t drawn in, as I didn’t have time, and couldn’t be bothered.

Below left, Ringo Starr’s drum kit. Actually could be any drummer, Ringo just popped to mind because he is an ickle fellow. I love Ringo.

Numbers 44-46 are drawn from photos taken back in September, when I was down in Los Angeles. These are hydrants from Venice Beach and Marina Del Rey. I was getting sick of local hydrants so added a few different designs. I sketched similar ones to these while down there, but took photos of these in case I had some ridiculous excuse to draw them later on, like NaNoDrawMo. Here they are. #45 is like a big yellow clown, like c-3PO’s insane cousin from the circus. I particularly like #46.

Have you ever been to the Venice canals? I don’t mean the ones in the actual Venice in Italy, I mean the ones in Venice in California, that you sometimes see in the movies (soppy movies, admittedly). We were there on our weekend in LA (it was our anniversary; appropriate, since we got engaged in the actual Venice) (and honeymooned at the Venetian), strolling about the narrow sidewalks along the water, admiring the houses, wondering which ones we would live in if we suddenly became very rich (I’d have to sell a lot of drawings I think). It was calm, there was no noise of cars, just the tweeting of birds. If we lived there I’d want a little boat.

Speaking of waterways, we stayed just around the corner in Marina del Rey, where our hotel was a block away from the Cheesecake Factory, and our room had an amazing view over the marina itself. I sketched it quickly just before we checked out.