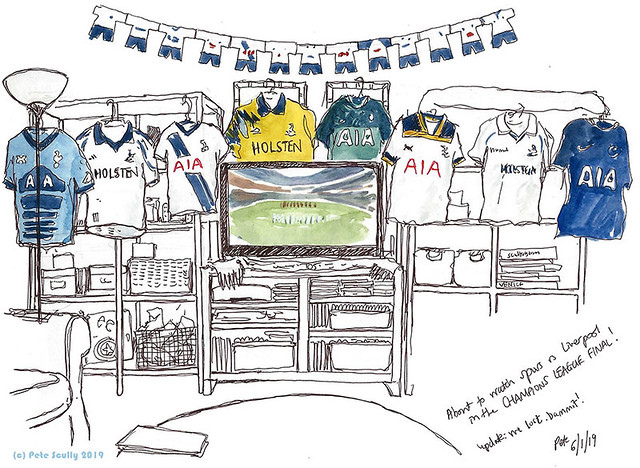 It felt like a World Cup game. I don’t want to talk about it. I’m just glad we got there, we really shouldn’t have even made it out of the groups. That quarter final against City with the late VAR screen ‘no goal’, that dramatic late goal at Ajax after being three down on aggregate, the fact we didn’t have a home stadium until late in the season, the fact we never bought a single player in a year and a half, it’s a whopping great achievement getting to the Champions League final, our first ever one, my beloved Tottenham Hotspur. It was a wild ride. The final itself was killed off by a dubious penalty decision in the first 30 seconds. Liverpool sat back and soaked us up easily, but both teams looked like they hadn’t played for three weeks. I had all of my Tottenham shirts, which number a good many, hung up around the house like a museum of football kits. I made a couple of banners of all the old home kits, we played the old Spurs music and watched old Spurs videos all morning. I never thought we’d actually win it, years of watching real World Cup games has taught me enough of that, but Liverpool have won it enough times. It would have felt better to lose to a non-English team really. Oh well. We can say that Poch should have done this or Harry should have done that, but at the end of the day it’s a football game and one wins, one loses, and there you go. That’s life. I had always said that if Spurs win the Champions League I would put on all of my Tottenham shirts at once and run around Davis singing Chas and Dave. Well the weather was in the high 90s so at least I didn’t have to do that. 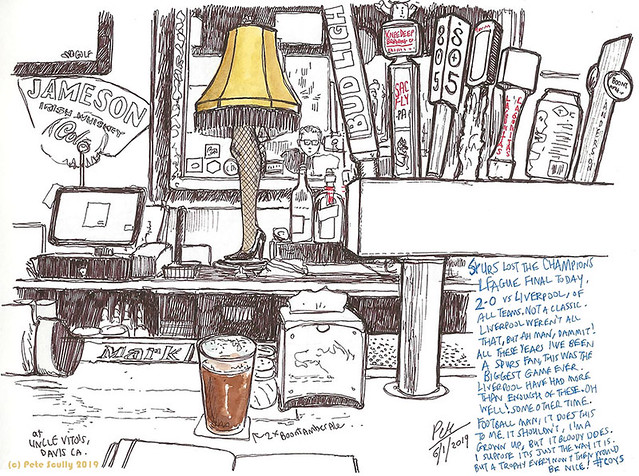 I had a walk downtown that evening though, minus all the shirts, minus the Chas or the Dave. I just needed to sketch and have a pint, and hopefully it would be somewhere that wasn’t showing a replay of the final. I stopped into Uncle Vito’s, who were showing golf, and sketched the above before walking home. Oh well. At least Arsenal lost their final too (unfortunately it was to Chelsea), but that means no North London Supercup. Some other time maybe.

Slowly scanning sketches. This one is from a Davis pizzeria / bar called Uncle Vito’s. I have sketched it a couple of times before (once every couple of years or so) and on one evening in early March I needed to come out and do some bar sketching. The beer is nice here, and not expensive. And tall, as you can see from my drink. I don’t really eat the food here though; I had a pizza once that was not really to my liking (it had Thai flavours, which in this case meant peanut sauce and beansprouts), and I have also had their garlic fries, which are delicious but come in an enormous pile, I think I had it in 2009 or so and am still feeling full up. Just beer it is then. The screens are blank, there might have been sports on them, basketball maybe, too late for American Football, too early for American Baseball, maybe it was American Soccer, or maybe it was like just the news or something. Or a movie. I don’t know. It doesn’t matter, stop wondering. The leg lamp-post, it’s from that Christmas movie, anyway the first time I went in there I though they had two of them, before realizing it’s just a mirror. Mirrors behind bars can be deceptive. For years I thought there was a mirror behind the bar at the Good Mixer in Camden Town, I never clocked that that was in fact another side to the bar. I never clocked that I had no reflection, or if I did I must look pretty different, Camden will do that to you. Anyway this most definitely isn’t Camden, it’s Davis.

Another panorama to click on and see in bigger format. This is Uncle Vito’s, Davis, a pizzeria and bar which I come to every couple of years or so. I needed to go out and do some sketching, and since it had been a while I needed to come here and sketch it again. It’s a nice place. There was baseball on – the season as started again, and the Giants, champions in 2014, were losing. After that, there was basketball. I decided to not colour it all in and leave it simple. This is called laziness, but I spend so much time on the ink and that is what I enjoy most. It wasn’t super busy, which is another reason I went in to sketch. That and the lamp. Let’s face it, it was entirely the lamp. Another one for the bar-sketch portfolio…

After my talk last Friday, I signed my name in some books at the bookstore and then popped across the street to a local pizzeria/bar, Uncle Vito’s, for a couple of cold pints. It’s been a long time since I was last in there (and I sketched it then too). They have a fantastic mural outside, and I don’t know if ‘Uncle Vito’ is a Godfather reference, because as you know Vito had no nephews/nieces, only children and godchildren. Either way, I always call this place ‘DeVito’s’ by mistake. I remember back when this place used to be a Chinese eatery called Wok’n’Roll. They do good beer here, but I didn’t get food. Last time I did, I got the garlic fries, and it was like getting a mountain, there were just so many. Tasty, but far too many for me alone! It is funny, having sketched almost all of the Davis bar areas now, how different they all are. This one has a mirror sloped enough so you can see more of the bar behind it. It also has a leg-shaped lamp-shade. Some of the locals in the bar commented enthusiastically on my sketch, and took photos of it in progress, which is always nice. Part of my talk that evening had been how I am more comfortable with people watching and commenting while I sketch, much less shy about it. I can also hear all the other sounds going on around me, the sports on the TV, the sounds from the kitchen, the laughter of people enjoying their weekend; I did overhear one frat-boy student type at the bar to my right, who I didn’t speak to, say something to his girlfriend about people with red hair looking like Tintin, (“what’s with that?” he exasperated) – perhaps he did not see the red-haired person sat right next to him? There I am, by the way, reflected in the mirror there (and no, that is not Bud Light in my pint glass).