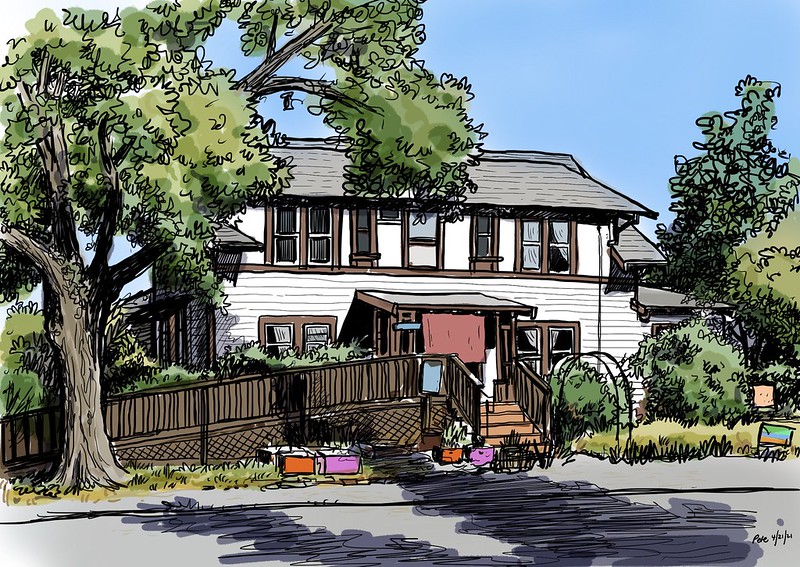 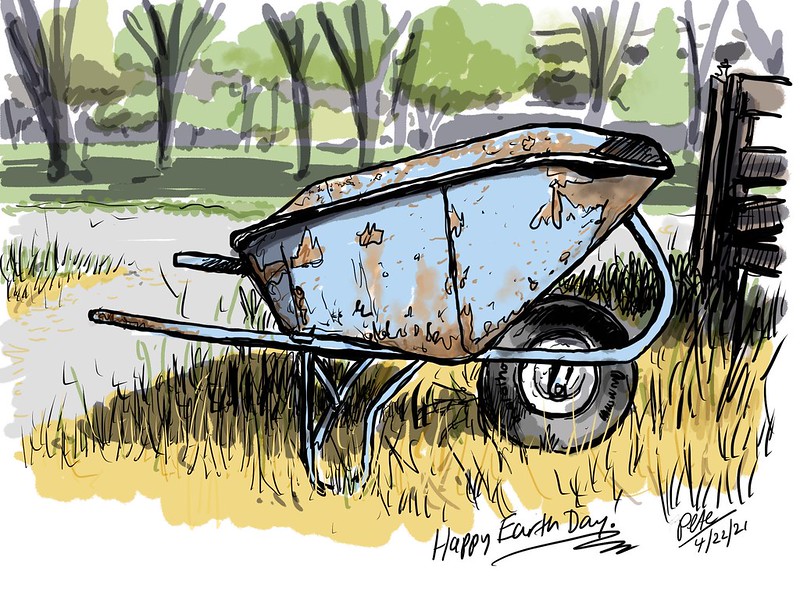 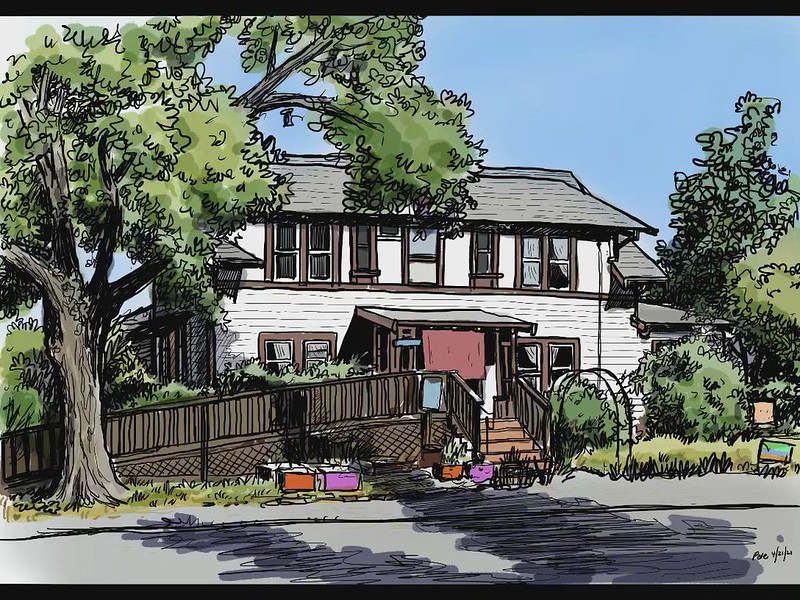 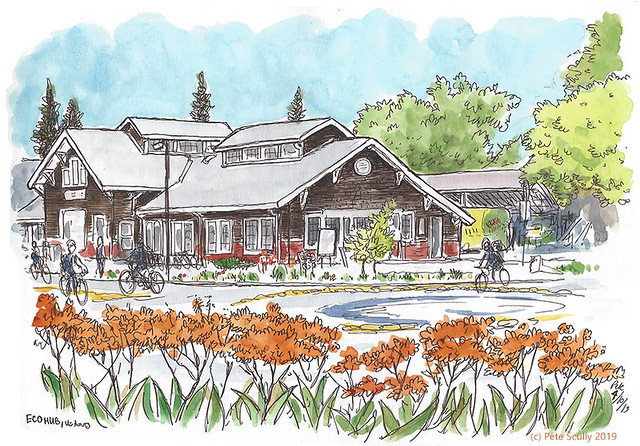 Last week, I co-led a couple of mini-sketchcrawls over a two lunchtimes called “Sketching Sustainability“. Here are my sketches… Above, the UC Davis Eco-Hub. Yes, part of the saem building as the Bike Barn, I have sketched this building so many times. You could say I recycled an old subject. The aim of this sketchcrawl was to draw things that promote sustainability on campus. The Eco-Hub obviously does that, so does the Bike Barn, because Bikes. However I did not know that the orange flowers in the foreground are also part of a sustainability thing, which is that the thing they are planted in is actually something that is designed to catch rainwater so that it doesn’t just go away. You can tell I’m not an expert, but it was explained to me and I thought it was cool. Below, some super quick cyclist sketches. I gave a quick demo on super fast people sketching. These were all very quick, just a few seconds of scribble, plus a few splats of paint. 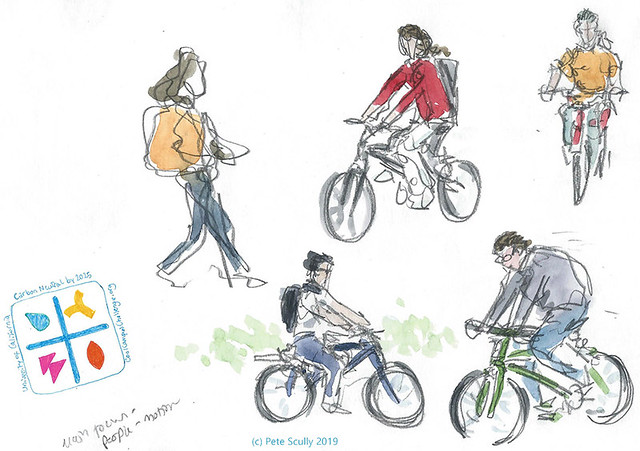 Below is Nick Linda, a student in Sustainable Environmental Design who is also a tour guide. He introduced the theme of Sustainability at the start of the sketchcrawls. We didn’t have many people come, they were small groups, but people still did a lot of sketching. It’s part of the Cool Campus Challenge. We are trying to once more be the ‘Coolest Campus’. I know, I know, we already are, but in this case it’s do with with environmentally cool. Again, UC Davis should breeze that (pun absolutely intended, hey it’s me), but apparently Irvine won it last year so we have to show all the other UCs who is really Cool. Here’s a link to the Cool Campus Challenge: https://www.coolcampuschallenge.org/. By the way this sketch of Nick took about a minute and a half, I had to be quick because it was nearly my turn to speak. The main organizer was Camille, I didn’t sketch her, but she had made a whole bunch of sketchbooks for participants, or anyone who would like to join in, along with pencils and sustainable sharpeners (nail files! I’m going to use it as a sharpener now). I’m also going to stop using my pencil sharpener to cut my nails, that has been very painful. 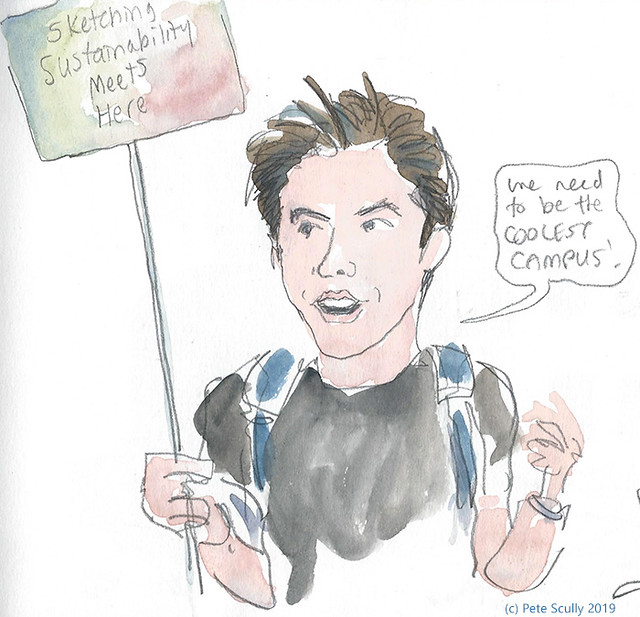 Below is the Student Community Center, whee we started and ended our sketching. It is a Platinum LEED Building, which is very good (my building is Gold, which is also good, but this building I guess is just better). This is the rear. I sat down low on my tiny super-lightweight fold-out sketching stool. 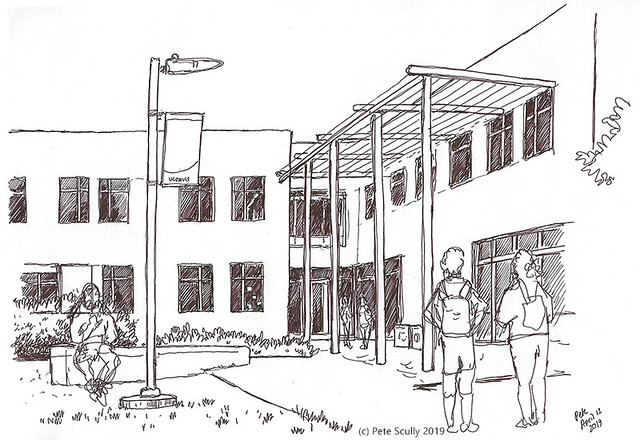 And finally, well I can’t resist drawing these bins can I. Recycling is of course very much part of Sustainability. By the way, I have to say I’m glad I don’t work in Sustainability, because typing that over and over is quite tiring, it’s a long word. It’s hard enough for me to always be typing Biostatistics, my spell-corrector now just corrects it to the typos, I’ve done it so often. But I think perhaps Sustainability should use a smaller word, more carbon-neutral, easier to type out. Anyway! This was a fun thing to be involved with, great to raise awareness of Sust-y, I learned a few things myself and met some nice people. Many thanks to Camille and Nick for organizing it! 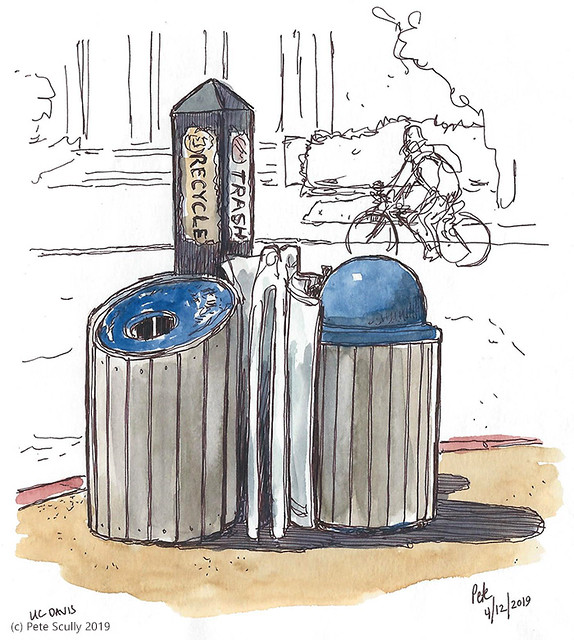 As well as the ‘Let’s Draw Davis’ sketchcrawl coming this Sunday (I’ll post the map I drew for that soon), there are a couple more sketching events coming up this week that I’m leading, both on the UC Davis campus. They are lunchtime sketching events, organized by the Sustainability folks on campus (specifically Camille Kirk) as part of the ‘Cool Campus Challenge‘. If you are nearby, join us on Wednesday April 10 (12pm-1:30pm) and Friday April 12 (12pm-1:30pm) meeting at the lobby Student Community Center, right in the middle of campus. I’ll give a few tips on quick sketching, while xxxx will talk about things to focus on that are to do with the theme of Sustainability: people riding bikes, sustainably-built buildings, recycling and composting bins, water-efficient gardens (I think they are called), that sort of thing. UC Davis is the #1 university in the country for campus sustainability (and #3 in the world). If you are at UC Davis with a sketchbook this week, and want to learn a bit about sustainability on campus, come and join us!